The third and final part of the NES Ninja Gaiden trilogy was released in August 1991. Unlike the the first two games, the third game received mixed reviews due to cheap hits and a nonsensical plot involving clones and mutants. This time around Ryu Hayabusa must figure out why he is being framed for Irene's murder. 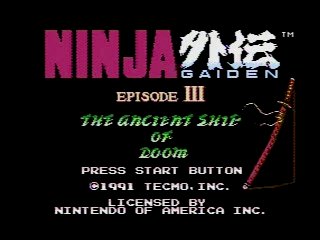 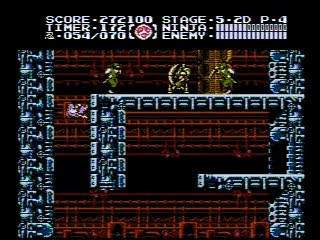 Since this run went close to perfect I'm not gonna talk too much about the stages other than some crucial parts.

Stage 1:
Manipulating the flying heads in the climb with my movement, so I can go full speed the whole stage.

Stage 2:
The first screen is a bit tricky. You need to jump on specific spots in order to manipulate the enemies to be at the right spot so you can just hold right and jumpslash everything in your way.
Autoscroller...*sigh* Fooling around with a silly glitch where Ryu hangs onto nothing. I like that glitch :D

BOSS: A boss depending on RNG. I got the secondbest pattern so I could have saved 1 more sec with the best pattern.
I found a new quickkill where you take a damageboost to get up on the platform without really losing any hits on the boss which makes it faster for you to hit him when he's topleft/midleft on the screen.

Stage 3:
The stage is mostly pure optimization of good movements. What's crucial is to get the quickkill on the boss (which I got).
The trick to get the quickkill is to get 3 hits in before you position yourself in the middle waiting for him to come down and face you. Then you need to time your last invincible fire wheel properly so it does the final hit on the boss when he tries to jump up.

Stage 4:
Important to not take more than 1 hit in the first screen. Otherwise I have to wait for a cycle on the first spikesection which costs like 1,5 secs. Stage went perfect and another quickkill on the boss is in the books!

Stage 5:
This is the hardest stage in the game imo to do it flawlessly. So many sections that are really tight to get past without taking damage and some parts where you want to take damage. Overall a very technical stage and very scary since I usually approach the bossroom with only 1 more hit until I'm dead.

BOSS: I found another quickkill for this boss which allows me to kill him when he starts to jump towards the left. With my new kill, I finish him off as soon as he lands in the middle (instead of killing him while he's jumping on the left side).
It is possible to get him in the topright corner but then the whole fight needs to be like as frame/pixel-perfect as it can be, and I only managed to do it twice in practice. It could have saved me ~1,5 secs.

Stage 6:
Ice physics! Another hard stage that is mostly movementoptimization and to top it off, you get to face a boss that is the most RNG dependant in the game!

BOSS: If this guy decides to troll you, the run is dead! If you take a hit from the boulders that drops from the ceiling, say goodbye to the quickkill! Luckily I got good RNG and managed to get him. Really good stage btw!

Stage 7 / Final stage:
This stage has it all. Weird windphysics at the beginning, Weird hitboxes on the enemies, electrical fences, shit flying in from everywhere trying to knock you down into a pit, spikes coming out of the walls take takes like 1/3 of your lifebar. You can really tell you are at the final stage when you're playing this game, the difficulty really ramps up a bit here.
You get one invincible fire wheel in the first screen that you need for the rest of the game, so any fuckups here is usually a dead run.
There's so much to talk about but I think I'll just summarize it like that and go for the bossrush instead.

Final Boss phase 1:
SOOOOO crucial to get the boss on his first swoop when you're standing on the left side! It's such a tight trick that when you look at it, it doesn't even look like the sword reaches that far to the boss, but it hits anyways.
I lost the run on this phase 3 times before I got this run. I missed him, had to go to the right side and hit him from there which costs like 5 secs so I'm really happy I finally got him down the right way!

Phase 2:
Not much to say. Jump up and slash the s*** out of him while abusing your invincible fire wheel.

Phase 3:
Same thing here with a little twist. Fire wheel, jump into his hitbox and the fire wheel will take out his shield really quick, then knock yourself out on the weak spot! GG