Released in September 2002, No One Lives Forever 2 followed the retro, kitschy, 1960s feel of the first game, with some gameplay tweaks added in for good measure. The game is most notable for receiving a "Game of the Year" award from Gamespy, and being a nominee in the "Excellence in Writing" category at the Game Developer Choice Awards. 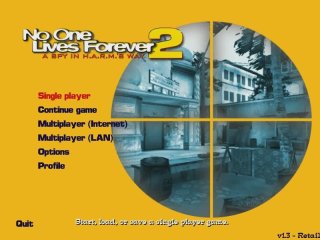 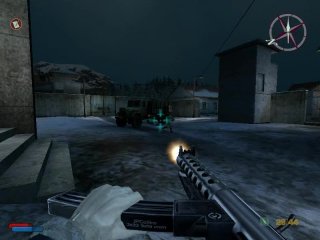 NOLF2. My second speedrun. Not that hard to run once the route was clear. I did start running it directly after I had completed it the first time so it probably can be improved. I did it segmented due to it being a bit too difficult for me to do single-segment. Although I did split it chapter by chapter it is not individual chapter runs due to me wanting to use the skill system for time-saving purposes. I also do some mistakes and unnecessary stuff out of habit, like crouching when searching bodies and in some cases searching bodies at all. But now onto the segments...

First level not that hard. Stun first ninja, get katana. Use katana to slash any other ninjas found. Jump past the ninjas coming out at the end of the level. For some reason walking past them makes them discover you, jumping past them is apparently completely silent.

Second part was the main reason for restarting the first segment. When opening the postboxes I check to see if the package is behind the vending machine, otherwise I had restarted which accounted for 90% of all tries. I fail to take out a ninja and the alarm is sounded which causes some problems but not enough for a retry. I was quite tired of this chapter and really wanted to continue at this time.

Gotta love this one. Go to the house, killing any ninjas encountered. When getting to the house, go directly to the gate and let the alarm go off, failing the primary objective. Then run to the exit.

Welcome to the most boring part of the game: Russia. Also was a real pain to get through alive. The first chapter is only long and boring so I wont bother commenting it much. I leave the snowmmobile at the entrance to the comms tower due to it being possible to get over the logs when going there, but not when going back. And there are too many guards there so I wont have much use for it anyway.

Tonnes of guards, lots of backtracking. I place explosives at the gate and the fuel tank to make the escape faster. Of course both the papers I had to pick up were at the last possible locations I checked.

Tonnes of guards again. And if you are too fast to the bridge you will blow up with it.

Chapter 6: Diary of a Double Agent

Finally a good mission again. More ninjas to defeat. The first part is helped by the fact that I could scout the otherwise random location of the batteries and then reload. The rest isn't that hard. The part where you have to fight a lot of ninjas is timed so you cannot just kill off a lot quickly I think. Fighting Isako is a piece of cake after she has entered the house.

The first part is just running around back and forth while being chased by police. I pick up a couple bananas in case they would get too close but it turns out I didn't have to use them so I use them on a civilian instead. Hehe...

As for the second part where you have to "sneak" into the office, just run. It's faster.

Getting the posters is boring since you have to be within a certain distance for the police to put them up and at the same time avoid him. Just takes a lot of time if you know how to do (and some luck when it comes to grabbing a poster guarded by a police). The rest of the level is a piece of cake.

The final part is also pretty easy, slthough there are a couple of randomly placed items to get.

Chapter 8: The Art of Murder

First part is easy. I haven't figured out the correct way to get past the trap, though, so I just run past it.

Second part is lots of luck. And one of the few levels where it is better to just run past most enemies rather than stay and kill them.

Third part is hell. One definite armour on the whole level. Protecting Armstrong was most annoying since he really likes to die.

And then a cycle chase to end it all!

An easy level. LOts of running around, but only one enemy. The location of all objects could be scouted here as well.

Chapter 10: The Curse of Kali

Another annoying mission. Mostly due to the fact that all fires require 2 buckets of water to put them out. Which means lots of running back and forth between a crane and a fire.

Piece of cake, even with random bomb locations. Also a very backtracking-free level. Opening the gate while waiting for the mimes to arrive takes away a lot of time too.

In the first part I take the long way around to avoid cameras and guards. Then lots of running around to get the manual. And surprisingly enough the recorder is in the first location I check.

Chapter 13: Terror in the Deep

This chapter starts with lots of action. The fastest way to defeat the Mime King is to stand where I stand where you can see all four hatches and which one the Mime King is going for. Also his minions are to be ignored and hope that they aim badly. After that it's just to take the left corridor and run like hell to get out.

Lots of guards, but not that hard really. Volkov is pathetic. Isako is a harder opponent, but still not that difficult.

Tonnes of guards and some super soldiers, but still not that difficult. Ammo is not a problem to find, but you still have to be a bit careful with it. And missing an ASSS shot is not an option. Final boss is pathetically easy when using explosive shells.