North & South is a strategy game released on various consoles in 1989. In it, a player is given a choice of playing as either the Union or the Confederacy and must defeat the opposing army through overhead battle scenes and optional train robberies and fort takeovers. This game may be musically confused as well as geographically confused, and the scope of the war may be scaled down to laughably low levels, but the equine genocide simulation aspect is bone-chillingly realistic. 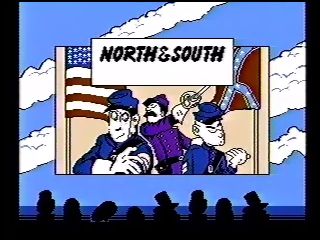 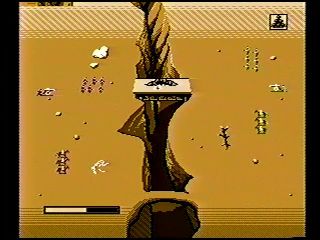 North & South
A Fair and Honest History of the War Between the States
By Dr. Brown, Professor of Fake History

I. The Setting of the Stages

The American Civil War began in January 1861 between the United States and the Confederacy. As the majority of southern states had only seceded from the Union that same month, the Confederate Army only had 20 soldiers of varying occupations. The Union decided to immediately mobilize their own army, which by curious coincidence also had exactly 20 soldiers.

The first move of the Confederate Army's General Marcus Ippe was to begin a march northward to catch the Union before they made it too far south, so he left Mrs. Ippe and headed to Tennessee. General George Uh from Georgia also headed north, to North Carolina in support of Ippe and to divide the attention of the Union Army.

By February, the Union Army under General Hugh Nork of New York had marched through New West Virginiarylandelajersey and arrived in Virginia. The other half of the Union Army, under General Mitch Aginn from Michigan, had originally been heading south, but upon reaching Indiana, decided to head west, to Illinois. This was done for the purposes of forcing the Confederate army to march further and wear out their supplies, however, when the armies met, it was clear that no supply or man was lost on the way.

Upon learning General Nork was in Virginia, General Uh decided to march his army of ten brave men into that state and begin the first great battle of the Civil War.

II. The Battle of Virginia

This battle took place on a wide-open field - one of the three landscape options available in the entire country. The army on both sides was comprised of six infantrymen, a cavalry of three mounted men with sabers, and a single cannoneer.

General Nork's infantry decided to make a march for General Uh's infantry, however their marching pattern of straight-down, straight-towards was easily discernable to General Uh's cavalry, who had led the charge as soon as the battle had begun. With one fell swinging of their sabers - exactly one - the three horsemen managed to take down all six Union infantrymen, none of whom had the idea to fire a shot in their defense.

The Union's own cavalry, taking note of the superiority of the speed of the horses, decided to charge the enemy cavalry in hopes of turning the tide. Unfortunately, the Union's predictable saber-swinging rhythm led them open to (and receiving of) an instantly fatal, single Confederate saber-swing.

It was during this cavalry action that the Union cannoneer found the range between himself and his enemy's cannon on his very first cannonball, reducing General Uh's prized cannon to a pile of scrap metal and wood splinters. The cannoneer himself suffered a large cut on his right arm as a result of the explosion, but the well-being of his other body parts is not known as they were never found. The Union's cannoneer was motionless, thinking over his fantastic skill in cannon fire when he realized the Confederate cavalry, now reduced to two horses thanks to a lucky swing from a Union horseman, was headed in his direction. He had only a moment to try and reset his cannon position, but it was too late and he was struck down before he was able to fire a second cannonball.

It was thus that the Battle of Virginia ended, at the cost of ten Union lives, two Confederate ones, and a nice cannon that had been dragged all the way up from Georgia. The battle lasted about nine seconds from the Confederate cavalry charge to the final Union casualty.

News of victory in Virginia was sent from General Uh to General Ippe. Ippe had to anticipate General Aginn's next move, and since his last one was to keep north and force a longer Confederate march, Ippe knew that Aginn's next move would be further west. To ensure a meeting in the following month, Ippe also moved west, to Missouri. Just as Ippe had forseen, General Aginn's army did move west, to Iowa. The Union's train now made a journey, but only two moneybags appeared as a result of it, far short of the five bags needed to fund creation of another ten-man army. Such a total was not to be had for a few more months, and the war was reaching its conclusion. In March, General Ippe of the South met General Aginn of the North in the second and final battle of this war.

IV. The Battle of Iowa

Taking place in a desert with a giant canyon between them, this was quite a different battlefield than Virginia, and the limited access to the other side made an identical strategy impossible.

The immediate result of the destruction of Obvious Bridge was the falling deaths of four Union infantrymen, and the secondary result was a lack of access for the remaining two infantrymen and the three Union horsemen. The two surviving infantrymen decided to march down to the secondary bridge, a natural land formation. Their decision to always look forward, never behind or to the sides, proved disastrous as they walked straight into the canyon and fell to their deaths - as had somehow been forseen by General Ippe.

The battle would now be decided on the land bridge, and the six horsemen on both sides of it. The Confederate General Ippe's horses were given a very specific method of crossing - by staying on their own side long enough, and allowing the Union's horses to line up with them horizontally, they would force the Union's horses into an attack formation - which would inevitably result in two Union horses running into the canyon. This was also the same thing that would happen to the Confederate army, but that was a necessary step taken by General Ippe to ensure no more than one Union horseman would end up crossing paths with the single surviving Confederate horseman.

Across the canyon, the two last horsemen raced at each other with fire in their blood that showed in their eyes. By this time Confederate victory was inevitable, the only question remaining was how long it would take. If the Union horseman was victorious, then the Confederate infantry would have to march until they had a good spot at which to shoot down the Union horseman, while wearing out the fixed number of cannonballs that the Union cannoneer would be firing until he ran out. The war's result would be the same, but this would take an unreasonably long time.

With a rebel yell, the Confederate horseman took out his opponent and saw his final goal - the Union cannoneer, who was strangely shooting cannonballs at a blank spot in the battlefield. He never moved as hot death ran him into the ground. The entire battle lasted about thirteen seconds and cost ten more Union lives, three Confederate ones, four horses, and another cannon.

And so concludes the history of the Confederate victory in the American Civil War.