P.O.W.: Prisoners of War is a side-scrolling beat 'em up created for Arcades by SNK in 1988 and ported to the NES in 1989. You take control of the prisoner dressed in blue, a gentleman named Snake, as you break free of a prisoner-of-war camp you allowed yourself to be thrown into as you attempt to eliminate the leader of your enemy. Gameplay consists of 8-way movement and your attacks include punching and kicking enemy soldiers and using their knives and guns against them. 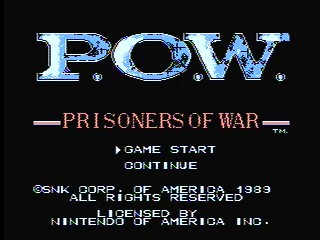 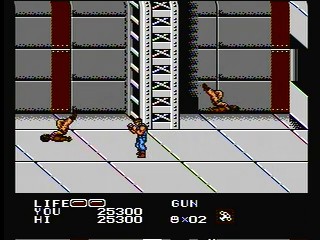 This is a game about assassinating the leaders of an army by getting captured on purpose and breaking out using a grenade that they somehow did not confiscate from our protagonist, Bart. Cool.

Anyways, some basic information about the game before moving to the level-by-level breakdown. The basic attacks are punch, kick, and jump kick, doing 4, 6, and 8 damage, respectively. There's also a back punch attack that does 6 damage, but it is generally not useful due to short range, laggy animation, and odd input. There are 3 weapons, the brass knuckles which upgrade your basic punch to 8 damage, and knife that can be thrown for 22 damage, and the gun, which can be swung for 6 damage or shot for some really large amount (at least 96, no enemies except the helicopter survive a single bullet.)

Most of the attacks I do are attempts to prevent enemies from getting stunned. Anytime an enemy is damaged in such a way that their HP reaches 6 or lower, they flip and become invincible for a while. So ideally, I want the enemies HP to get to 7 or 8, then jump kick or brass knuckle punch them. For a lot of enemies and situations, this isn't possible, but the general idea is there. Also, in order to get weapon-holding enemies to drop their weapon, you have to stun them without killing them.

Anyways, onto the level breakdown.

Stage 1 went almost completely as planned. I don't bother getting the brass knuckles in this stage since all the enemies are either shot or die in one hit anyways. I make a minor mistake missing the jumpkick in the last fight before the boss, but both enemies end up getting hit with the shot so not much time was lost. Normally, you are supposed to get grenades from the enemies who drop from the helicopter, but shooting it down works just fine.

In stage 2 I miss a jumpkick on the 2nd guy while getting the brass knuckles, and someone how the commando in the first triple commando fight runs through my attacks. Both of these cost pretty small amounts of time. The divers here are great, somehow they need full scuba gear in water that isn't even waste deep. They also have odd hitboxes, you can attack them before they raise out of the water, but once they stand you have to wait for them to start their attack animation. The rest of the stage goes essentially perfect, and the boss doesn't escape the corner.

In stage 3 I got confused during the brass knuckles room and completely miscounted my punches, costing me probably 2 seconds or so. The second commando fight looks really sloppy, but oddly because of how the positioning worked out at the end of the fight, I don't think I really lost time compared to my planned strats. Everything else basically goes as planned, a few small oddities but nothing major. Boss doesn't get a chance to even move this time.

Stage 4 is where things get really interesting. The gun's 3 separate bullets can be used to great effect, which I show off in the brass knuckle and armor rooms pretty immediately. Each of the commandos here has something along the lines of 40 hp, so these fights would be pretty long normally, and instead end almost instantly. After jumping off the building, I miss the 2nd shot in the first commando fight by a few frames, but normally one of the commandos would have rolled anyways, so essentially I missed an opportunity I normally wouldn't have had and instead used the normal strat. I miscounted my bullets and wasted the last shot after the laser section, normally it would have been used on the two knife guys I punch after the motorcycles, but it also means I get to punch the green knife guys earlier instead of having to do much riskier and somewhat slower jumpkicks. I got very unlucky and got the slow walkers near the end, so I had to kill one instead of simply letting them run off screen. I also don't turn around properly and waste a shot on the last set of knife guys, but it doesn't cost a ton of time due to how the fights work out. Overall, stage 4 went extremely well, the shots here are all very precise and I hit a vast majority of them. While hitting all of them would certainly save a good chunk more time, this is by a pretty good margin the best stage 4 I have had during attempts, and the main reason why I decided to stop here instead of improving the run further.

The APC fight goes amazingly as well. I believe this is a personal best by something like 8 seconds. Normally, a commando or two will slip by on a lower axis, but this time they all stayed in line so I could chase them offscreen instead of having to hit them 6-8 times each.

The last stage has a hiccup on the last knife guy. This guy is by far my least favorite enemy in the whole game, because of how his AI works and how he attacks, its very difficult to finish him off once he escapes. When I had him pinned down with kicks, I really wanted to finish him, and the result is pretty plainly in the video. The stage 2 boss gets away from me, so I have to use the knife to prevent him from running around and wasting a ton of time, but that's about 80% of the reason I save the knife here instead of using it on the previous fight anyways.

The last boss is extremely annoying to end a run on. If you listen to the audio carefully, you can tell that sometimes the hit will make a buzzing noise instead of the normal hitstun noise. For some reason, this boss will sometimes take damage on every frame that an attack is hitting him, instead of just once. The result of this is that in spite of having a total of something like 186 HP, he can die in as few as 4 hits. Of course, he can also just decide to go straight into an attack and not take the hit at all. In this fight, it took 10 jumps to finish him off, I'd say my average is 12. The best fight I've ever gotten in a real attempt took 5 jumps, and comparing this run to that, the extra jumps cost about 12 seconds. On the other hand, if he decides he really doesn't want to take the hits, I've had him cost me over a minute.

Overall, I feel this is a solid run of a fairly obscure game. There's certainly room for improvement execution and luck, and possibly a few different strats to optimize the gun use, but I am fairly happy with the results, and I honestly don't feel like the game is worth the effort to crank out a perfect run when there is so much RNG stacked on the final boss. I promised myself that when I broke 20 minutes, I'd submit, and this certainly does that and then some.

Thanks go out to all the people who stuck around while I played this, and to all the SDA staff who make the site happen, and SNK for the random nature of all the games they have made.