The sequel to Paper Mario was released in October 2004. Mario journeys to Rogueport after Peach writes him a letter, including a treasure map she bought. When Mario arrives, Peach is nowhere to be found. Mario soon makes friends and learns about the ancient town buried under Rougeport and the crystal stars required to open the mysterious 1000 year-old door. 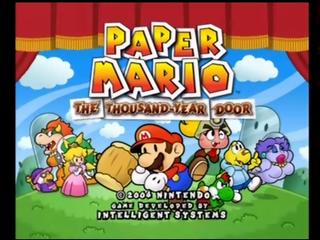 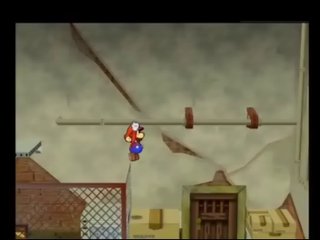 Timing note: The in-game timer is now used because it's accurate and saves work. The European version run was recorded at 50 Hz, which runs slower than 60 Hz.

I decided to a speed run of Paper Mario: The Thousand-Year Door after seeing Kyle Duffy's Paper Mario speed run and how much time he took off Philippe's run. Seeing as most of Kyle's boss strategies involved using Mega Rush, I thought that I should do likewise. However there are two choices: Mega Rush and Mega Rush P. Both are available as early as after Chapter 1, but I chose Mega Rush over Mega Rush P since it was much easier or quicker to manipulate Mario's HP to 1 than trying to manipulate Super Rank Goombella/Yoshi. Additionally, you don't need an alternate strategy for the second Doopliss fight if you use Mario.

The first main difference between my run and James' run is that I did not buy 20 Fright Masks at the beginning. First of all, the incident at the beginning (which, normally, Mario loses half his coins) forces me to spend it all at the start. To buy Mega Rush, I needed 60 coins which isn't a problem (knowledge after doing Mousimilian's trouble). Additionally, I did not need (or use) 20 Fright Masks for the whole run. It may not take longer to buy Fright Masks whenever they are needed than to buy 20 and store 12 at the start, withdrawing them whenever they are needed.

I specifically pointed out that I played on 50/60 Hz in the trials listed (I played on the PAL/Australian version). The main difference between playing in 50 Hz and 60 Hz is that Mario, Peach and Bowser walk slightly slower in 50 Hz than in 60 Hz. An observation I noticed was that enemies seems to be unaffected between the two frame rates, meaning that an enemy which Mario can easily outrun in 60 Hz will easily catch up to him in 50 Hz. I took some strange paths (see Segment 3, for example) to avoid enemies. The in-game timer is unaffected between the two frame rates. To compensate for the slow down and other disadvantages, I allowed one extra minute per segment, giving my initial target of 7:21. However, not everything in 50 Hz was a disadvantage. Being slightly slower, it gives me more reaction time (like dodging the two Pale Piranhas and the Cleft three times in Segment 6).

I needed to plan when I get Level Ups. The Level Up themselves aren't the problem, but rather the full heal which comes with it, since I most of my boss strategies involved Mario being in Peril. I did not want a Level Up between:

I upgrade FP each time except after the first Shadow Sirens fight, both times in Glitzville and from Chet Rippo.

There were many times when I made minor mistakes (pressing B one too many times, pressing A too quickly, jumping by the door). I did not necessarily restart after a mistake, however, I tried to keep them to a minimum. There were other time wasters which happened in battle (and I have no control over) such as objects falling from the ceiling, background falling down or the mist appearing (I called them "Stage Effects"). These appear more often as soon as Mario becomes a B-list Star (Level 10). I had about 7 in the entire run and fortunately, the mist did not appear at all. I chose not to restart with every occurrence of a stage effect or minor mistake because they take a few seconds (comparing a few seconds to 7 hours (25200 seconds) makes very little difference towards the final time).

For most of the segments, I made two attempts - the first attempt served as a "time-to-beat" while the second attempt was made to minimise the number of minor mistakes / stage effects. Segment 27 was the only segment where the first attempt was faster than the second. There were some segments (2, 25 for example) which I only did one attempt, because I was quite happy at the outcome or the segment would otherwise need many tries to reduce the time by a paltry 3 seconds. The Glitzville segments were an exception since the second file served as a back-up file. I included the the first attempt of the last segment because it had fewer mistakes, despite being a few seconds slower.