Released in 1983, Picture Puzzle is a slide puzz-- just read the author's comments, it tells you (almost) everything. 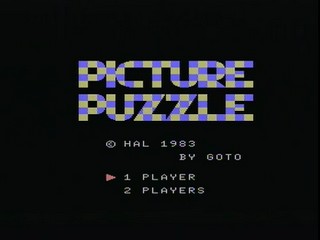 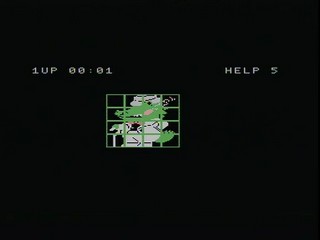 A very minimalistic game made by HAL Laboratory in 1983,
a company now better known for games such as Kirby and Super Smash Brothers.

This is played on a European Philips MSX VG-8020
and frankly I have no idea about speed differences. It outputs 50hz though.

The game is basically a 15-tile slide puzzle. You can choose between 6 different images.
The game only starts after the music finishes so you get the time to pick the image you want.
I went with the crocodile because he's wearing a white suit with cane and hat AND he's smoking a cigar.
Talk about SWAG!

When the puzzle starts, it removes the bottom right piece
and starts shuffling the board piece by piece every few frames.
If you press fire within the first few frames the board only shuffels 1 piece.
Put it back where it belongs and voila, You Win.