Released in 1984, Pitfall II: Lost Caverns broke new ground by being one of the first games to feature an in-game soundtrack and a vertically scrolling screen. Pitfall II helped define the platforming genre with a huge game world not thought possible for the aging 2600. Pitfall II also added infinite lives (dying sent you back to a checkpoint but cost you points), something real men did not need, but was probably added for the girly men in the gaming world. 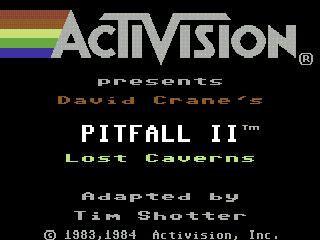 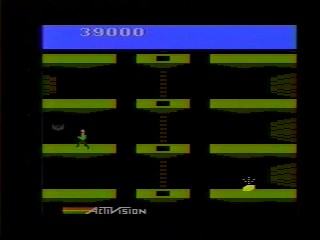 Note: Difficulty A and difficulty B are not separate categories because there are no noticeable differences between the difficulties.

You are about to see me rescue some guy (or woman?), a huge diamond ring, and a weird cat-kangaroo-thing, then waste all my energy celebrating rather than actually finding a way to escape the cave.

Pitfall II is a fun, not too hard platformer (not too hard because it moves slowly and offers restart points and infinite lives) with a lot of randomness. Enemies besides scorpions begin at a random point in their animation. That is, unless you manipulate them. The bats, the birds, the frogs, and the occasional ability to move left or right during a fall all cycle at a regular rate. I begin each attempt by resetting right when a frog is about to jump right. It's not perfect, but it times everything right to make the first 2:30 of the game run pretty smoothly (though there might be a better plan possible). With manipulation, I think luck literally is not a factor in this run.

2600 veterans (which I'm not) will already know that it is possible to jump over both the first frog and the hole next to him in one jump. Sorry to say, I do not do that in this run. Instead I take the easy way out; I just fall down and swim to the next room. I can sometimes pull off the frog jump, but I have found no way to save any time with it, because strangely it throws off the timing of moving left onto a platform out of a big fall a little later, due to that cycle thing I mentioned. That's a little hard to explain, and of course I don't totally understand it.

Thanks to stanski for suggesting falling rather than climbing down after rescuing the human. It's hard to time but it saves 5 seconds! I am extremely fortunate that I can move left out of it into the proper corridor on the timing I was already using.

I can manipulate the birds, albeit not perfectly (stanski calls them gooses), and sometimes the bats. That's why I keep stopping momentarily as I climb toward the end, so that the enemy in the next room won't slow me down as much. I did well this time, except had I waited a fourth of a second less against the last scorpions I probably could have run right under the last bat and climbed the final stairs one frog-flip earlier (almost 3 seconds).

I'm somewhat proud to say that I personally found the big jump that carries me left through two screens all by myself. True had I not found it vdub_bobby would have told me exactly what to do where, but I found it, so yay, I get to pat myself on the back a little; same goes for falling a long way and then moving a pixel left just at the right time just before.

Major thanks go to vdub_bobby and stanski for their help and critique. And I must thank the four people I know of that make the SDA world go around -- mikwuyma, nate, DJGrenola and Radix.

Hoping I get to see someone's improvement of this run some time! Hopefully not TOO soon though :P

(This was played on Activision Anthology for Game Boy Advance. I have never had an Atari 2600.)

*whew* I'm 99% sure this is the fastest glitchless speedrun possible on this game. I never played Pitfall II nor a 2600 console prior to this year and learned every strategy on my own, though Douglas Korekach's still impressive record at Twin Galaxies inspired me to push my playing to the limits of sanity. Thanks to my family (hi Megan and Sarah) and friends; also thanks to the Japanese band Unita Minima, who often provided a mind-blowing soundtrack to mind-numbing practice sessions.