This is an illegal infringement on the Pokemon franchise that was accepted for SDA after lots of consideration. As a game it's not too good. The Sega Mega Drive platformer punishes you for everything you do and you have to hit the only boss (after only 4 normal stages) 48 times to kill it, which will take you about one quarter of your speedrun. 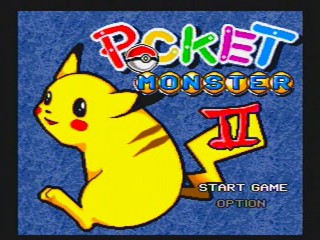 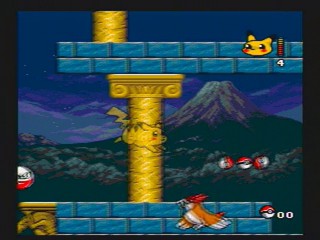 Pocket Monster II is an unofficial game for the Sega Genesis in which you play as Pikachu and jump around. The first time I played this game was during a large blind race that happened after Cyghfer got his Rockman 2 record. I thought it was really fun and decided to route and run it. Neskamikaze had previously ran the game before I picked it up, and Schola_of_the_dollas helped me optimise the route even further (specifically stage 3.) I initially got a run of 4:15 on emulator, which was very good, but improvable. I decided that I wouldn't work on the game any more until I bought an actual cart and console. Well, that happened, so here we are.

The mechanics of the game are uhmm...unique. Pikachu moves faster going to the left than the right. When you jump on an enemy, or take damage, you get an air jump. I don't know if this is intended or not. Similarly, if you press the pokeball button (B) while landing or taking damage, you can perform a jump cancel. I'm not really sure how the hitboxes work in this game either. Occasionally while jumping around, enemies will spontaneously die for no discernible reason. The best I can come up with is that your hitbox leaves your sprite and hunts down enemies mercilessly. Oh yeah, last but not least, moving platforms can despawn, and you can also fall through them if you don't jump high enough.

I play on the easy difficulty to give myself more health so I can do more damage boosts. I could up the difficulty, sure, but the end result would be slower. As for the run itself, it is very good, possibly my best speedrun to date. There is only about a second of mistakes, and they are very minor. Every trick went well, I didn't die in stage 3, and the final platform spawned in stage 4 (that doesn't happen often.) Let's break it down.

Stage 1:
The jumps I do on the first two Pidgeotto's are very difficult. I do a jump off the 3rd Charmander to set myself up to jump into the cake (full health) without loosing any time. I lose a bit of time jumping over the last Oddish (yes, that's an Oddish.) I could of jumped earlier, which would have been faster.

Stage 2:
Short stage, just jump up to the Butterfree and get damaged boosted by the monkey and go to the end.

Stage 3:
I do an air jump at the start. I'm not sure how to actually do it, but I try every time. The key to this stage is to take as little damage as possible, as death is very likely. The stage lay out is that the exit is to the far left, but is blocked by a door that will bounce you away. There is a button to the far right that will open it, so you have to make your way there first. The crab I damage boost up to at the top is kinda random; sometimes he doesn't fall as soon as you want, however I got lucky this time. After the crab, there is what I like to call the path of death. Between you and the button, there is a bunch of enemies, and a bunch of bad hitboxes to go with them. This part kills me a whole lot, but I managed to do this section perfectly, surviving the path of death and not slowing down at all. Now, back to the pillar with the crab from earlier; I do very specific movement here to despawn an Electrode at the end of the stage. That weird sideways zip I do is a result of that bouncy door I was taking about. The button makes it go away, sure, but lol hitboxes. The way to do it is by falling straight down and hitting a direction at the right time. It's kinda hard to explain. Anyway, where I do the zip is where the Electrode I despawned would have been. Also, you can actually continue to zip more than once, although that will just push you through a wall, so it's not something I ever want to happen.

Stage 4:
After that perfect stage 3, I was pretty anxious. Stage 4 is no cake walk. Lot's of pure optimization. The only real mistake was after I jump off the second Electrode, you will notice I catch the corner of a platform which caused me to slow down slightly. That's it. The boxing glove rabbit I jump off of at the end can be a little random, but I manipulate him so I can get a good jump every time, although it would be faster if you just went for it and got lucky. The last jump off of the Electrode is the final obstacle. You have to get damaged by him, so if you don't have enough health, GG. Even worse, the last platform that I have to jump on has a bad tendency to not spawn, which will ruin the run. It spawned for me this time, so I get to face the final boss...

KOFFING:
This boss takes 48 hits. Not 3, not 10. 48. The intended way to kill the boss was in fact to jump on his head, and was quite difficult. However, once again, lol hitboxes. If you do short hops near the boss, he will, for whatever reason, take damage. To kill him even faster, I lure him over to the corner so he just pinballs off me and the wall. Hilarious way to end a run.

This was a great run and was great fun getting it. I think it is hilarious that this is the sole reason I own a Genesis. One day I hope to get a perfect run of this game, or who knows maybe I will tackle the beast that is Pocket Monster 1. Well until that day comes, I am content with this. I hope you enjoyed watching.