Released in 2003 Pokémon Ruby and Sapphire are set in the beautiful region of Hoenn, a place of masterful heroes and mysterious teams, of friendship and battles. As the new kid in town, you set off your journey as a Pokemon Trainer. Who knows what wonders and dangers await you? Now it's time to grab your gear and head out on your own..." Pokemon Ruby and Sapphire began Generation III and were released on November 21, 2002. Ruby and Sapphire brought about several new features such as Natures, Abilities, Double Battles, and a new EV and IV system. There are minor differences between the two games, mainly those involving which Pokemon are present in which version and the Pokemon owned by Team Aqua and Team Magma, the villains complementary to Team Rocket. 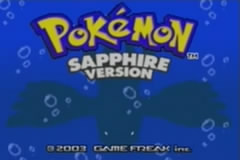 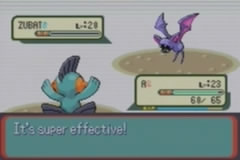 WOW, 6 months ago I came to SDA with a weak 2:52, after reading through the sapphire thread I crammed the run down to an impressive 2:11, then with a bit of help I got it down to 2:04:36. I was so sure I would have beat 2:00 so you can imagine how I felt when I failed by quite a bit. It was at this point when I decided that I wouldn't run sapphire again but then with some encouraging words from 'Ultimate Darius' and 'Ascetic Swordsman' I was back on my feet and ready to plough into Sapphire once again. With Ascetic Swordsman's help adjusting my route to incorporate Abra for teleport abuse and Ultimate Darius's brilliant lateral thinking we came up with some truly awesome battles (e.g. Norman) which helped immensely with the overall speed of the run.

Big thanks to:
- Nate, Mikwuyma, and everyone else who runs this magnificent piece of websitery out of the goodness of their hearts.
- FractalFusion, your Pokemon Sapphire TAS inspired me to start speed running
- Ultimate Darius, for being the greatest asset a speed runner could hope for, your strategies are unrivalled.

Segment 2 - Selected a Mudkip which turned out to have really shit IVs, named Mudkip "A" for same reason. This segment took a while because I thought I needed a female Mudkip for Flannery, but I didn't end up using bide on her Torkoal anyway.

Segment 3 - Avoid wild Pokemon and save before May. Looking back I should have merged segments 3 and 4 but oh well.

Segment 4 - A crit is needed on Treeko for 2HKO, save before Calvin.

Segment 6 - No encounter is needed pre-Wally, but after the Wally catch your item menu is preset to Pokeball, saving a tiny bit of time when caching the Zigzagoon.

Segment 7 - Probably could have scored an extra crit on the pooch but let's just say I left room for improvement.

Segment 8 - Got the quick claw which is a massive asset to the run, the trainer in Roxanne's gym is the only non-compulsory trainer I battle as it just gets me to lvl 10 and Watergun is needed for Roxanne, I also fluke manipulated a full restore off the trainer which gets used against Norman.

Segment 9 - Roxanne went quite nicely, a QC activation on the Geodude would have been nice.

Segment 10 - Pick up repel which I didn't end up needing, save before Aqua Grunt, nothing interesting.

Segment 12 - Manipulate the 2nd Rare Candy off a wild Whismur OHKO. An extra 17 exp is needed to hit level 14 prior to Brawly.

Segment 13 - Get back to Rustboro and buy a shit load of items, pick up the Chesto berry for Norman and the Leppa berries for Marshtomp's Mudshot and Kyogre's Surf, get to Granite cave.

Segment 14 - Catch an Abra for teleport abuse, repel my way through to Steven, Save before trainer in Brawly's Gym.

Segment 15 - Kill Meditite, use the 2 Rare Candies to evolve, save before Brawly.

Segment 16 - Brawly's Pokemon are both critical OHKO's after an x attack, made a stupid mistake of running into the house ...stupid controller... only wastes 4 seconds but looks bad.

Segment 17 - Beat team Aqua's Pokemon, save before May. I should have merged segment 16 and 17.

Segment 18 - JESUS CHRIST this battle took way too long, it took me 3 months and about 50 hours to beat her. You can kinda tell when I beat the Groyvle how nervous I get because I take a little while to select Watergun for the Numel. 200% QC critical hit Rocktomb for the OHKO on Groyvle, the reason this took so long I think is because it was only once in a blue moon that her Wailmer would die to a Mudshot cause my IV's were lacking, anyway it was a quick battle.

Segment 19 - My god I love Quick Claw. Buy lots of shit, get rock smash, get bike, enter and exit Pokecenter to set up a warp point, proceed to rape Wattson. This segment was originally going to end after a crit on the battle girl, but I ended up beating Wattson's gym in 1 segment.

Segment 21 - Crit on the Roselia for the OHKO, Leppa berry used to restore Mudshot's PP.

Segment 22 - Bike it to Meteor Falls and then teleport back to Mauville.

Segment 24 - Manipulate a Rare Candy, switch 1st Pokemon to Zigzagoon to take an intimidate for the Archie battle.

Segment 25 - Sacrifice Zigzagoon and Abra to avoid getting roared away by Mightyena while setting up a guard spec and also preparing for a deathwarp, it's funny how Mightyena uses Sand-Attack.

Segment 26 - Nothing much, save before Flannery.

Segment 27 - I could have beat the battle with 3HP less but getting it done as I did took me a bloody long time and it would have only saved 3 seconds. I got a double crit on the Torkoal lol. Deathwarping out of Flannery's gym was necessary as it avoids the lengthy conversation with May after you leave the gym.

Segment 28 - Buy some items, get and teach Strength, save inside Norman's gym.

Segment 29 - A crit on either the 1st or last trainer would have been nice but meh, Chesto berry given to Marshtomp for Norman battle.

Segment 31 - Get and teach surf, get Rare Candy, save in institute.

Segment 32 - Some more QC activations would have been nice, as would a crit on Mightyena.

Segment 33 - I realised after I just completed this segment how bad the battle was...I didn't get knocked into torrent range, hence the Zubats on Mt Pyre had to be Rocktombed, and I also used Surf on the Numel instead of Strength.

Segment 34 - Grab the Persim berries for the final Archie fight.

Segment 35 - Catch a Wingull for Fly. I panicked when I got to this point in the run because I forgot to catch a flyer and I wasn't sure if one could be found before I needed it, I should have caught a flyer just before fighting Norman so it would learn Fly without having to have a move deleted.

Segment 36 - Surf wasn't strong enough to take out the Zubats so SE Rocktombs were needed.

Segment 37 - By evolving for Winona the battle becomes 2 turns quicker and more reliable.

Segment 38 - A crit on the Skarmory or Altaria would have been nice but I didn't reset for one as it was very rare to be able to OHKO the Swellow because of my shit IV's.

Segment 39 - Getting knocked into torrent ranged allowed the Sharpedo to be a OHKO.

Segment 40 - I wasn't sure how much HP I needed for the Liza and Tate battle hence I left it as it was.

Segment 41 - Turns out I needed to use a Super potion, but the battle went perfectly.

Segment 42 - Bought some repels and some Hyper potions, saved before the boulder puzzle.

Segment 43 - Now I don't know why but there is a kind of lag in the time it takes from when I push the buttons on the control to when it happens in-game on the screen. Because of this, the boulder puzzles were almost impossible for me to execute while running so I was forced to walk. The battle went very well, Rocktomb was used to avoid the message that rough skin causes, the berry was attached for the Archie battle.

Segment 44 - Battle went pretty well, using an x attack to cancel intimidate is faster than sacrificing a Pokemon, I accidently tried to use a repel when one was already in effect...it looks bad.

Segment 45 - I don't know why I taught Waterfall to Swampert, I should have waited till the next segment when I taught Kyogre her moves.

Segment 46 - That was the 4th Kyogre I was going to use, the other 3 I stuffed up with the menus.

Segment 47 - Using an x special is faster than calm minding, a crit is needed for a OHKO on Milotic.

Segment 48 - Victory Road went well in the dark, I didn't bump into too many things... I try to avoid SE messages where applicable.

Segment 49 - It feels weird praying to NOT get a crit but that's what I was doing and the gods were hating on me, 5 crits and 3 were on Phoebe lol. I was hoping for 1:55 and when the save showed it at 1:54 I was like OMG. Roll through the credits and check the trainer card with a final time of 1:54:21

Thank you everyone for your support and I hope you all enjoy the run.