Released in October 1999, Pokémon Yellow Version takes a few ideas from the Japanese cartoon and incorporated them into this variant of the Red/Blue game. It features new graphics, new Trainers, and a noisy yellow rodent that gets a moveset unique to this version. 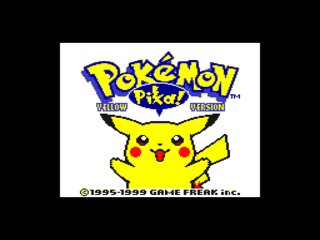 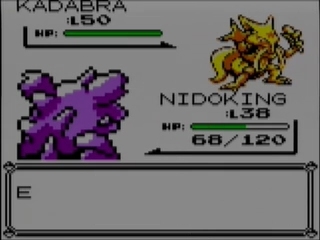 First off, I'd like to point out that This run is available on YouTube should you prefer that viewer style.

Now into the thankyous for everyone involved in this run:

The SDA staff: For making this run viewable to you right now!

Anyone who helped with the Blue run: Since most of that was transferred over here. 0xwas, cyghfer, mike89, ParadoxKarl, I'm looking at you guys.

The Metroidhunters Crew: For the general support during the run, and the audio commentary.

My aim time for this game was 2:04. I was incredibly pleased when I saw 2:02 show up at the end (I actually thought it was a 2:03 when running it too.) This game has a fantastic tendancy throughout the whole game where one crit from just about anyone will end your run. I have lost runs to 7 of the 8 gym leaders, everyone in the Elite Four, and several things you'd think were no threat at all, including Nidorans, Rattatas, Raticates and even Zubats. This was much harder to make than I thought it would be, but at the same time, there is still some roo for improvement. That being said, I wouldn't come back to this again unless someone else managed to beat this time (or maybe in 27 years time when I lose memory of this game)

Opening: I and U for names again, it's awesome, deal with it. Don't care about Pika so he gets a shitty name. Rival Fight is actually quicker to lose since your defense is so low, and he can kill you in 3 turns. The turn count was actually the worst, but I had redbar so it was alright.

Route 1: 3 encounters back and forth is about average here.

Route 2: And here is the bane of all my runs...looking for that perfect Nidoran. I usually stop after about 10 encounters, so this was more than acceptable. (Fuckin' females...)

Viridian Forest: Have to grind a bit in here for Double Kick for Brock. Getting a Nidoran to 12 actually takes less exp than getting a Mankey to 9, so even negating the rest of the run this is still the fastest. After the first battle, at level 8, I check my stats. The following are what the stats can be;

Keep in mind every single one of them matters for this run, attack obviously costs you time, as does special, speed will cost you some time too and get you killed on Misty, and without the Defense you will lose the last battle. I had 16, 13, 14, 13 which are the absolute best I've ever had. Battles in here were nice, got myself my flier too, and much less than the normal 5 encounters.

Pewter Gym: Unfortuneately my Defense was actually too good to be redbar after the Jr Trainer, so that sucked. Onix can destroy you with Bind so bad here...this was insanely good comparatively.

Route 3: That attack going in!!! These fights were all nice.

Mt Moon: Average encounters in here is about 9, so pleased with this too.

Nugget Bridge: This Rival fight can be murder, Lead has Growl, two others have Sand Attack...this was very nice. Rest of the battles are fairly easy, and go well.

To Vermillion: This is all pretty standard too. Perfect Jingle Skip! Incredibly got 2 encounters here, that's never happened before. I usually only get 1 here like 10% of the time too >_>

SS Anne: This fight is much easier than the previous one, goes flawlessly.

Cerulean Gym: I was intially doing this before going down to SS Anne, but would lose about 90% of the time. Gym Leaders have "Good" AI, and so she will always use Water attacks on me. The difference is being able to outspeed Starmie...and it makes a huge difference. For reference, her Starmie has 56 Speed and I had 57.

Vermillion Gym: Oh. My. God. This has never in my life been so bad it was fucking so fucking UGH! This is really the only not great part of the run, and it's god awful...

Rock Tunnel and Beyond: All fights here went very nicely...hit a few walls in Rock Tunnel not nothing that costs more than a couple of seconds.

Lavendar Tower: The game takes to a new Dynamic now that I have Horn Drill. And of course I deal with Ghosts...lovely. Because there special is incredibly high, Rock Slide is the only move that OHKOs them, and ironically is the only time I use Rock Slide (WHY CAN'T NIDOKING LEARN DIG?!?!?!)

Silph Co.: This is all fairly standard except....SYLUX SKIP!!! Those warp panels too strong...

Saffron Gym: Remember when I said I had died to 7 of the Gym Leaders? You can't die to this one! Ironic that considering her Type, Sabrina is incredibly free.

Fuschia Gym: This place can be a huge pain...not only does it have more psychics than the psychic gym, we learn that Gen 1 trainers are cheats as they select their move after you select yours. When asleep, Koga will never use Sleep Powder, but if you wake yourself up that turn, he can dish out another Sleep Powder for endless trolling.

Safari Zone: Not much to say here...

Cinnibar Island: Only one encounter here is below my average 2. Gym went nicely...especially given that Ninetales tried to troll real hard.

Road to E4: Rival fight wasted a few seconds, but that's alright. Victory Road is my most hated place, but it was alright. Now to the business end...

Lorelei: First three E4 memebers have bad AI, and just throw out any attack. Any crit here kills me, as does a Speed fall, so this is an exceptionally dangerous fight. Manage to keep it going though

Bruno: Only thing that he can do is Critical Hit with Dig and it'll OHKO if I have low Defense. Amazingly it has happened before...

Agatha: Only threat here from Gengar is Lick Paralysing...which she doesn't use as much as she could. Golbat sports confusion moves though, but I still move through unphazed.

Lance: AI switches back to good, which means he will always dish out a Hydro Pump here, which has morelike 180% accuracy if you ask me. Critical obviously wrecks me, but this goes well too.

Champion: This game is very fitting in that the last fight is by -far- the hardest in the game. Not enough Special? Sandslash won't die. Not enough Defense? You won't live. He could use another move? Of course not, he's got good AI after having no clue the whole rest of the game A critical? You're done. And then you finally get past Sandslash. Out comes King Asshole Alakazam. Any critical here and you're done, and as crits in Gen 1 are based on speed, you know he dishes them out more often than others. Not only that but he can get an infinite amount of shots at it, since you have no time to retaliate until he uses his non-attacking move, Kinesis. Once he does though, assuming he doesn't critical the very next turn, it's lights out. I was over the moon when I managed to win, this was my best run up to this fight, I would've been absolutely gutted if I lost.

If you want an idea of how stupid this fight is, I recommend watching this video I put together to demonstrate it.

If you want a better understanding, check out the audio commentary since I'm sure it's got stuff I forgot to mention in here.

With uber-large-skip glitches 0:00 by Mark McKenzie, done in 2 segments.

The original Pokémon games are loved by so many, but they come with a very distinctive flaw, they are buggy as hell. This run attempts to prove just how glitched they are, completing the game with whopping time of 0 minutes!

Segment 1: I bypass the options as there are no fights in this run, animations and battle style make no difference, and it isn't all too inconvenient to just hold B and mash A on the text. I walk downstairs (this is later to avoid poison damage lag) and perform the save abuse glitch, turning off the game whilst saving. I think there is only one frame to do this on, either way it's a very small window and if you miss it the save file just deletes itself, but if done correctly as demonstrated we can do some very nifty stuff.

Segment 2: Now is when stuff gets kooky. Instead of not being able to access my Pokémon as I should have none, I can now access my 255 glitched pokémon. I'm not all

too worried about them though, just what they can do. By first switching any of the first 9 with pokémon #10, I choose #2, I activate a glitched item inventory. I then switch #11 with #9 to allow scrolling through these items to be much quicker. Then a bit of messing about in the glitched item inventory shifts a few bytes here and there so that tossing a certain item controls the warp point, and 68 so happens to be the Hall of Fame. Also of note is my text speed switches from 'Mid, to 'Fastest', a speed faster than the normally fastest accessable 'Fast', making even the HoF cutscene faster!

I'm aware of a quicker method where walking downstairs isn't even necessary but when I tested that method on a few different emulators I got a lot of crashes, so in fear of my cart I used this method instead. My aim was 0:00 anyway, which I knew I get could with this method, and it's easier as I believe only certain Trainer Ids work with the quicker method. If you want more information, go check out comments made by gia and p4wn3r on their TASes.