Power Blade was released for the NES in 1991 (US) and 1992 (EU) and developed by Taito. From the manual, we learn that in the year 2191, our hero Nova must head out to fight off aliens that have taken the Master Computer off-line (from playing the game, it more looks like Arnold Schwarzenegger is off to fight a reincarnation of Lenin trapped in a computer). Equipped with an upgradable boomerang weapon (and in rare cases even the legendary Power Blade weapon), Nova must get through 6 sectors before gaining access to the Master Computer Control Center and return peace to earth. With some similarities in the gameplay to the Megaman games and offering a catchy soundtrack, Power Blade is generally well appreciated, even though it never received much fame. 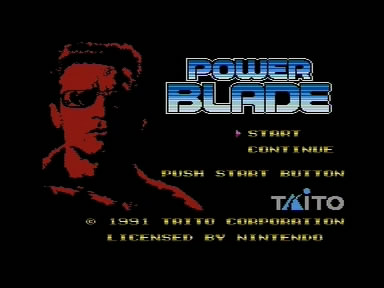 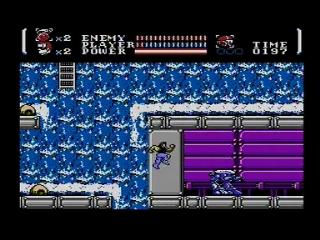 I think I'll start with explaining the tricks in this game.

Boomerangcancel: When you throw a boomerang before landing from a great height so you don't get the kneeling animation. It saves a couple of frames.

Ladderdrop: When you drop from a ladder and regrab it as close to the bottom that you can.

Wallclip: This is what made this game so insanely hard to compete for the WR... The game have alot of places where I jump at a certain pixel around a corner, turns around, and that gives me a boost up onto the platform where I normally can't jump because it's to high.
Biggest example of this is at the end of Sector 5 after I get the keycard.

Grenadeglitch: By using a grenade while entering the bossdoor, you can kill the boss immediately. A grenade does 2 damage, and when entering the room the boss starts with 1 hp before it fills up to max and the fight starts. So before the fight starts the grenade kills the boss for you :D
This glitch does only work on Boss 1, 2, 4 and 5.

Another thing you might wanna know is that the itemdrops are fixed in this game so that's why I kill stuff in a certain order to get my grenadedrops at the right places.

My thoughts of the run:

Everything went extremely close to perfect except for the clips at sector 6. It's about 3 seconds that I lost there that I could improve the run with, but then I have to hit ALL the clips first try kinda and that is insanely hard.
Hope I can pull it off one day, but for now I will move on to another game since this is almost as perfect as it can be :)

Hope you liked the run! :)
Hit me up on twitch.tv/InfestedRiche if you wanna see more NES-action :)

Shoutouts ofc to ExoSDA for his run that was one of the biggest challenges I've ever faced!
And please check out my pals Crippe123 and k0zzx (it's a zero, not a big o) who are other runnes of this game what I know of at the moment :)

If you want to discuss or share information related to speedrunning this game (tricks, strategies, ...), use this thread:
http://forum.speeddemosarchive.com/post/power_blade_nes.html
If you have questions or comments about the run, use the existing verification thread:
http://forum.speeddemosarchive.com/post/power_blade__july_27th_2010.html

Run comments
8.46 (level 5) - Normally, you need to wait here for a moment anyways. Otherwise you will jump into the big, blue robot and get knocked back. I think very little time was lost from this mistake.
15.28 (level 3) - You need to wait a little bit for the frog below to land. Otherwise you will get knocked into the bog.
16.24 (level 3) - If the luck is right (and you need a bunch), it's faster to take out the top beehive as third. Most of the time however, bees from the left will come and interrupt and the end result is slower. How the beehives open is random as far as I can tell.
18.18 (level 2) - Normally, I'm at full health and the burger doesn't pause the game momentarily. This time I'm not at full health and I press the jump button during the pause. While not very time-consuming it could have been avoided by paying more attention.
18.56 (level 2) - You can save half a second by jumping off the ladder with good timing. Somehow I mess up here very easily. Maybe because of always getting hit by that enemy or something. Anyways, I usually just assume the time loss and climb down the ladder.
19.17 (level 2) - The beginning of what I believe is the biggest time loss in the run. It's possible to forward boost through all the crushers. It demands pretty precise timing though and none of my comparable completions did much better. I'd say three seconds were lost.
21.30 (level 7) - I didn't turn around for personal revenge, but because it's one of the enemies that is on my list and thus taken into account for the item drops. In hindsight, it was completely unnecessary though. The grenade I got from the big robot, I could have gotten it from the turret just after instead. It was a split second call and I admit that it was a bad one.
22.10 (level 7) - You need to wait momentarily on the ladder if you don't want to land on the blue thingy and being knocked down the pit.
22.46 (level 7) - I haven't found a way to hit the first form of the final boss twice without taking a hit. Other speedrunners have shown that to be possible though.

Competition (as of writing - early 2013)
First of all, the Japanese version of this game was called Power Blazer and, while similar, is so different that any times from Japan can't be compared with times from western players on Power Blade.
When I started preparing to speedrun this game, I was the first player having done any serious effort in doing so. Since then, it was reported in 2012 an 18:22 (expert, ntsc) by Daltone and a 17:33 (normal, ntsc-emu) by Exo. Both of these runs used jump clipping to cut out quite large chunks of the game and are therefore several minutes faster than my run (if adjusted for ntsc-pal timing difference).

Final thoughts
I do the final editing of these comments long time after the run was completed. Although this run uses routes that are now outdated since jump clipping started to be used in real-time speedruns, I believe this is still the fastest reported time that could be submitted to sda. I think the execution itself is mostly acceptable and that's the reason I think it's still worth to have it published. I have no plans on revisiting this game, but I hope that someone comes along with a run including jump clipping to obsolete it someday.