Predator for the NES was developed by a company called Klon that later became Dual Corporation. It's a generic 2D shooter as many games on the platform, though its first release was for the MSX, a home computer system that was popular in Europe, Asia and South America, but not the UK or NA. You have unlimited ammunition in all your weapons and must brave first a couple of jungle stages before diving into "Big Mode" where you have to fend off the Predator itself. 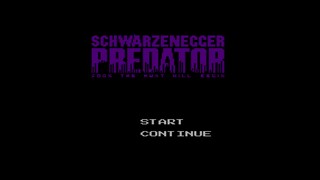 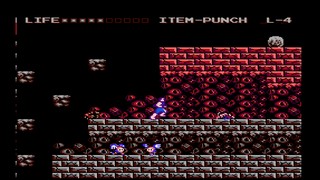 This game is a mess. It has nothing to do with the film outside of the plot in the cutscenes. You fight everything from guys in hamsterballs, shrimp, slimes, and birds that shit blood....with the occasional gymnast Predator thrown in. Oh, and Big Mode.

The game seems to have permanent ice physics combined with unresponsive controls. You can imagine how fun that is. You can ride some enemies, but getting off is sometimes a pain. Your jumps have to be precise, otherwise the movement of the enemy will cause the game to lose your imput. You will also slide off some enemies (notably the seahorses). You go in the direction they are facing in these cases.

Enemy movements are pure RNG with few exceptions. They always have the same starting positions, but what they do from there is anyone's guess. I take damage whenever possible to get boosts or make traversing an area faster (and easier). A note on d-boosts: you get a bigger boost from enemies than projectiles. It's useful in certain situations when you don't want a big boost.

Predator fights are also pure RNG. The ideal pattern is for them to jump straight up every time. Occsionally, they will jump to the side. This costs time as you won't get as many hits in and will most like cause you to take damage. It's possilbe to get 3 hits in per jump. I'm not the best masher, so the fights aren't perfect in this regard. When the Predator is squatting or spining, it is invincible. Also, the Laser is the only weapon that damages it.

Then there's Big Mode. Yeah. These are auto-scrollers...kinda. I say kinda, because when the Predator shows up is random. You can manipulate it a little, but there's always some randomness to it. The first 2 sets of bubbles are always the same. After that, they are random. They drop weapons, but the only one worth getting is the machine gun, otherwise you're stuck with 1 bullet on screen at a time. I try to grab 2 as it'll let you spam bullets, whereas 1 only allows 2 or 3 on screen. Another fun thing is that you lose the ability to shoot when you get hit for ~1 second. This tends to make Predator fights annoying.

The Predator always shows up after the second set of platforms. How long after them, is the random part. I've noticed that clearing out the bubbles seems to speed up its appearance, hence my trying to kill everything. The rest of the stages I just kill stuff to keep from getting bored.

There are a few stages that have branching paths that take you to different stages. The first of which is in Stage 5. The route I take skips a few stages that require the use of the grenade (or Pine as it's called in the game). I do this because it is an extremely slow weapon to use and the stage requiring it are the longest in the game. No matter the route, there are 24 stages, 5 Big Modes, and at least 5 Predator fights.

Now for a breakdown of all the stages:

Stage 1 - I take as many damage boosts as possible. I miss 1 that's frame perfect, and 1 that's RNG dependent. There's another that's frame perfect that I did not attempt because it traps you if you miss it. The red guy on the far right is just there to troll you. The best pattern has him falling of the ledge, so you don't have to wait for him. I did not get that, unfortunately.

Stage 2 - Damage boost when possible. I miss a jump at the end that, I think, has a 2 frame window, but the guy on the top platform adds a bit of RNG to the mix. Lost ~2 seconds due to this.

Stage 3 - Oh, I forgot to mention that this game doesn't like walls. This stage really shows that off by having the entire bottom half of the stage not have walls, meaning you can fall to your death anywhere. I pause in a couple spots to avoid dying, but otherwise d-boost my way through the stage.

Stage 4 - Go down as fast as possible. The drop is pretty easy, even though it looks difficult. This stage introduces the worst enemy in the game....butterflies. You can't play this game without swearing an oath of vengeance on all butterflies afterwards. I got lucky here, though. Missed a couple shots on the Predator, and miss counted on the seahorse. Lost ~3 seconds I think.

Big Mode 1 - Bubbles! Floaty jumps! Invisible Predator! Where the Predator shows up is random, so I just jump and mash and hope for the best.

Stage 6 - You have to ride the scorpion to get the laser. Total dick move for first time players as you need it for the Predator at the end of the stage. I got stuck on a seahorse and got a side jump from the Predator. Maybe lost a second.

Big Mode 2 - Same as 1, but different boss. This one's annoying because he keeps jumping into you and you can't turn around. Occasionally, he'll screenwrap if he jumps too far to the left.

Stage 8 - Shrimp despawned. Weird glitch that happens for no reason, so I miss a d-boost from it. Otherwise a simple stage. Go right, d-boost when possible.

Stage 9 - I have to watch my HP here because the plants do 2 damage and I need to take damage to clip through the wall at the end.

Stage 10 - The first part of this stage is RNG. If the bird? turns right and shoots, I can use the i-frames to get past the scorpion. It didn't here, so I had to d-boost off the scorpion, which is slower and more dangerous. Good Predator RNG, though.

Big Mode 3 - Gotta love those backgrounds. This boss trolls you by staying off screen even though you can see its claws.

Stage 13 - Don't let go of right until the end. Had a bad pattern from the last amoeba, causing me to lose a second from being knocked down a platform.

Stage 19 - My favorite stage. If done right. you never let go of right. I delay for a few frames for one jump, because I didn't want to fuck up the run by missing it. Otherwise a perfect stage.

Big Mode 5 - More bubbles. I call this one Surprise Predator because it comes flying at you at random. Just gotta avoid all the bubbles so you can keep shooting.

Stage 20 - Not much to say. D-boost, grab laser. I miss a couple shots on the Predator. I kill the seahorse while falling during the fight to save time.

Stage 25 - The bane of my existence. This is the true final stage as far as I'm concerned. I have no idea how you're supposed to do this without abusing i-frames due to the huge cluster of enemies. And then there's the butterflies. You have to ride that moon to the right, but those butterflies are out for blood and will do whatever it takes to make sure you don't stay on that moon. I got knocked down, but was able to get back on on the right. Seriously, fuck butterlfies.

Stage 26 - I do a mini-jump to avoid the first part of the winding platforms. It is possible to jump over the bricks at the end without waiting, but it's frame perfect. I miss the jump, losing ~7 seconds. This is the only thing I really regret missing in the run.

Big Mode 6 - The biggest mode. The Predator goes Arkanoid. Every shot bounces him back up. Had a badly timed jump at the start which cost ~2 seconds.

Stage 27 - I abuse i-frames to make it across the first set of boulders. Those scorpions are notorious for falling on you and knocking you to your death. Had some trouble with the 2 guys knocking me about and the Predator was being a jerk costing ~4 seconds.

Stage 28 - I get a frame perfect jump right at the start to avoid the scorpion. Simple stage, though. Go right, fall in door.

Stage 29 - The hamsterball can really screw you in this stage. I have no idea how to control which direction it goes, so sometimes it just goes right and you miss the jump to the left. The jump off the scorpion at the end needs to be timed right, otherwise you just fall off and die. This Predator fight is the worst. He tends to jump around more than the others and there's a bird shitting blood on you you have to watch out for (the blood does 2 damage). Not the best fight, but I've had far worse. Lost maybe 2 seconds.

Stage 30 - Lots of boulder hopping. I want to take as little damage as possible before the boss, so I wait to get hit by the projectile rather than running through the moon (1 damage vs. 3). I despawn the bird before the boss fight as it complicates the fight immensely. I got lucky, as sometimes it takes several seconds.

The final fight is a giant floating Predator head. Why? Who knows? I use the rocks as a shield to block projectiles and crouch to shrink my hitbox. Projectiles do 1 damage, touching the Predator does 4. It's RNG wether or not you'll get shot or rammed, but it's the best way I've found to fight this guy. You can really mash when it gets in close, otherwise you can only have 2 shots on screen. It doesn't go all the way to the right, so you miss the chance to get several hits in.

The first form has a large hurtbox. Basically, it's the whole mask. The second, though, is only its mouth, and only when it's open. I can never tell when I hit it either because of the damage sfx being canceled out by the laser sfx. What do you expect form the people that gave us Die Hard? Now the only thing left is to get to the choppa!