Prince of Persia is a classic puzzle/platformer, ported to a dozen different systems and spawning several sequels. Originally released in 1989 for the Apple II by Jordan Mechner, ported out the wazoo by other people, and updated for the SNES in 1992 by Arsys Software, the game features an acrobatic Prince who must fight his way out of a dungeon within one hour (two hours for SNES) to save the Princess from the evil vizier Jaffar. 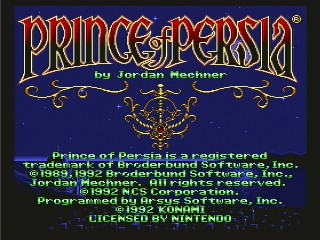 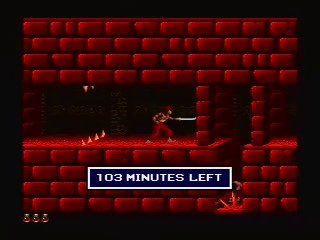 Timing note: The time is calculated by using the in-game time for levels one through nineteen, then manually timing the last level.

I'd like to thank everybody at SDA who's submitted a run, and the guys who run the site. If not for you I'd never have taken the time to do this run. I'd especially like to thank Nate for helping me figure out how to get the best quality with my capture device that I used for levels 1 and 10-20. I'd also like to thank Gavin Ward (Sprint/SprintGod), whose TAS of this game I lifted most of my route and strategy from.
I picked the SNES version of this game for a few reasons:

In general, jumping everywhere instead of running is faster, but you have to make sure you have room for it. If you see me running instead of jumping, it's because there isn't enough room.

If you need to get down a ledge by turning around, it's faster to try to skate off the edge and grab it as you fall (first seen near the end of level 2), but the timing on this can be tricky.

If you can pin an enemy up against the wall, you can continously stab them and kill them very quickly. I used this as often as I could against bosses, since they block far better than any regular guard.

I've been meaning to do these for a while. At 2:30 in the morning on a school night, I decided to just go ahead and bang these out. An hour and fifteen minutes later I was finished. It wouldn't surprise me if the last stage could be improved with ridiculous guard manipulation but fuck that, leave that for the TAS people.

This is probably the silliest set of runs I'll do in the foreseeable future.

Level 2: This one actually took some effort. But not much.

Level 5: Sorry, I'm too busy to fight you guys.