Released in November 2003, this prequel to the Prince of Persia series developed by Ubi Soft sees a young prince battling through the Sultan's castle to undo a catastrophe that he unwittingly caused. The prince uses acrobatic skills and time controlling abilities to navigate the trap-filled castle and undo the sands of time. 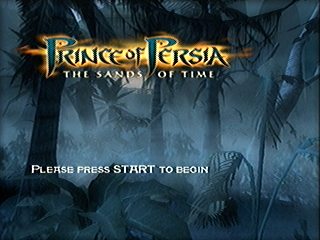 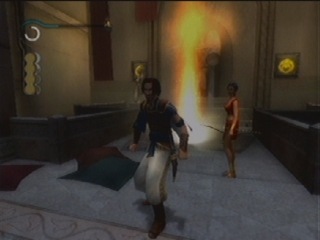 For those that are familiar with this game, I believe it's safe to say you all enjoyed what it brought to the table. The story is fantastic, the gameplay is really top notch, and from a speedrunning perspective it is a joy to work on. After a little more than 2 years of running this game I still enjoy working on it and will continue to work on this for years to come. Never a dull moment, and there are so many possibilities for new and improved strategies.
I first starting running this game at the beginning of 2010. I played it off and on for a year completing a test run in 1:46 at the final save. At that point I started work on a 'finalized' speedrun which I would then submit. My target time was to be at 1:30 at the final save. However, that target time soon changed to be something much faster as i began to dig deeper into trick/shortcut research. I realized there were a whole lot of new opportunities for faster routes, and more technical ways to help manage some of the more 'random' elements of the game. The result is a run that came very close to getting a 1:25 at the final save, and is much faster than Satvara's 1:29 run which no one ever saw.
For the run itself, I'm not going to write detailed comments about how it all went. If you are curious to know more about the strategies, routes, techniques, I will direct you to the PoP:SoT game thread on the SDA forums which has all that info. You can find that here....
http://forum.speeddemosarchive.com/post/prince_of_persia_the_sands_of_time_gamecube_any_and_100.html

Also, you can view the playlist for this run on my youtube channel which has a few details about the segments in the video descriptions....
http://www.youtube.com/playlist?list=PLA93DF5EE955717BB&feature=view_all

A few things I will mention about the run is that I will be improving this in the near future. I left a few difficult tricks out, and some new discoveries had been made after I had completed certain segments. All in all I know a 1:23 at the final save could be easily reached now, but I still believe there are quite a few things left to be discovered that could push that target time even lower.
From start to finish this is a well executed run. The only segment that makes me cringe a little is segment 6 which has a ton of possible improvements in it. But, the segment is just stupid difficult and I had been stuck on it for months. So I decided to just keep my best attempt and move on.

A few people I would like to thank...
Satvara - this dude discovered a lot of the big shortcuts in this game, and although he never showed video of his 1:29 final save run, he did make a few speed tactic videos which highlight some of the big speedrunning elements he discovered.
Reaver - he was my biggest help as I worked on this run. Many discoveries were made by him and on numerous occasions we worked together to figure out how to make certain route changes work.
Mikwuyma - Mike's part in this game has been mostly work and progress on the SS side of running this game. He helped discover a few tricks and has been a great source for suggestions on running the game more efficiently.
SDA staff - as always, thanks guys for your time and dedication. Much appreciated!

And with that, you can probably expect a new SS run of this game shortly. My next project will be to work with Mike on finishing an improvement to the outdated 2:06 SS run currently on the site. Between the two of us, I think someone will finish something in the low 1:40 range, or even possibly sub-1:40. As for now, I'm happy to have this segmented run finished and hopefully you all will enjoy watching!