Developed by Hudson Soft, Princess Tomato in the Salad Kingdom was released for the NES in North America in 1991. As Sir Cucumber, your task is to quench the political unrest in the Salad kingdom and to save the kidnapped princess Tomato. The game belongs to the select group of text-based adventure games for the NES. It's divided into 9 chapters, which include completing quests for complete strangers and solving more or less logic puzzles. Oh, and some chapters end with a boss that has to be fought in a battle of dead or alive in... rock-paper-scissors. 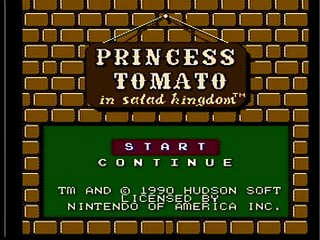 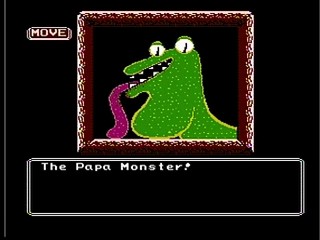 This game is a menu based adventure game. The planning for this game happened in two parts. The first part was figuring out the minimum number of actions in each section and memorizing them. The second part was mapping out the most effcient menu movements so that I was arriving at the desired action as fast as possible.

I use a few stratiges that the TAS does not use that I discovered from a different run. You can see this in the jail level where I use one less action to open the door in the water cell and also in the carrot plateau where I hit the hermit to teleport me to the begining of the level twice.

The only other relavant thing in this run are the boss fights. Almost all of the time variance in this game comes from the boss fights. The boss fights work in two phases. The first phase is a rock, paper, scissors, contest. Pressing up or down will result in choosing scissors, right chooses paper, and left chooses rock. If you beat the boss in the first phase you will have to pick a direction you think the boss will look in next. There are four directions so this is a 25% chance of guessing correctly. If you pass both these phases the boss loses a life depcited at the bottom. The bosses can have 1 life or all the way up to 5 lives. Alternatively the boss can do the same thing to you and if they win then the boss gains a life. Each of the bosses has a unique quirk that helps you mitigate the randomness with the exception of the final fight with pumpkin Jr which is 100% random. Saladron for example always throws scissors.

LvL 1 The Road To Saladoria: Everything went as planned.

Lvl 2 Saladoria: I had a slow menu transition when exiting the deli costing around .5 - 1 seconds.

Lvl 3 Jail: Everything went as planned.

Lvl 4 Parsley Forest: Saladron could be a bit faster. I would estimate a variance of 2-4 seconds based on my splits.

Lvl 5 Resistance Base: I accidentally selected "USE" instead of "GIVE" when I was talking to Lisa which cost between 1 and 2 seconds.

I had a slow menu transition after talking to "Peaja" the second time.

I had a slow menu tranistion after I use the crest in the jail cell.

I go back into the storage room on accident costing 2-4 seconds.

I try entering the locked door before using the key costing about 2 seconds.

I had a slow menu tranistion when attempting to use the water wings near the pond.

I look at minister pumpkin an extra time costing about 1.5 seconds.

My minsiter pumpking fight is not the greatest I had 2 or three splits faster than the one in this run. Although the pattern he selects for the rock, paper scissors portion is static I still only have a 25% chance of guessing which direction he looks. I estimate between 5 and 10 seconds of variance here. This time is in the top 10 percent of my times.

This goes so well I actually couldn't even believe it. The fight with pumpkin Jr is completely random on both the rock, paper, scissors portion and on which direction he looks. I guessed correctly six times in a row for a perfect KO. I am no math wizard but I had some friends crunch some numbers for me and they tell me the odds of that are 1 in 4096.

Overall this is a pretty tight run in my opinion with only minor mistakes. Most of the time saving in this game comes from the RNG of the boss fights. With the exception of minsiter pumpking they all went very well. This run beats a previously posted run by over two minutes.