The highly popular DS-exclusive Professor Layton series by Level-5 spans, as of writing this, six titles with a movie to boot. The constant is a mixture of puzzles and plot being unravelled by Layton and his assistant Luke. The first game from 2007 is framed inside a village called St. Mystere. A local baron has kicked the metaphorical bucket and left an opulant fortune for the first to solve a complex meta-puzzle involving a golden apple. 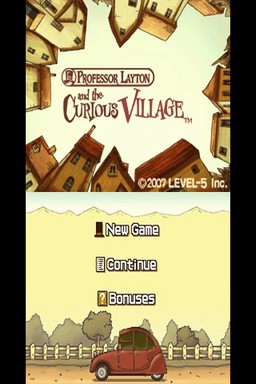 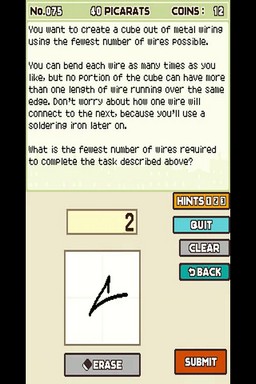 The first thing I want to address in these comments is my version choice. I struggled for weeks with runs on the EU version, trying to beat the previous world record. I went and did some frame by frame analysis and found that the previous world record, run on the NA version, just had VASTLY superior load times for all cutscenes - including the events preceding and following each puzzle. With a required 83 puzzles in the game, that's a LOT of time that adds up very quickly. ...Unfortunately, with this version we have to deal with Luke's NA voice actor. Which is awful. I'm so sorry.

I couldn't even recreate this in emulator by doing a frame-by-frame comparison, it only happens on hardware. To give you an idea of how much the versions affect the game, my EU any% best time is 5 minutes 15 seconds slower than this run. That's not entirely down to load times because my execution during this run was overall superior, but I estimate about 4 minutes of it was shaved off due to loading times.

The routing for this game was mainly concerned with deciding which optional puzzles to do and when. This game is fairly good in terms of optional puzzles, which took quite a lot of analysis of the puzzles. The basic priority list went:-

My comments for the individual chapters follows.

Prologue: Very strong. Only a couple of things can go wrong in the prologue and I usually reset if they do, so that's expected.

Chapter 1: Couple of minor mistakes, mainly with puzzle 8's handwriting recognition and how slow I was with the save prompt. Good RNG on puzzle 6 makes up for this though.

Chapter 3: No problems on this short chapter. About as perfect as it gets.

Chapter 4: Only thing to point out would be a minor mistake in puzzle 25 at the end of the Riddleton segment where I move one of the coins badly. Apart from that this part went pretty much perfectly. Even the handwriting recognition system was kind to me, with just one hiccup on puzzle 42.

Chapter 5: This had the only pathing mistake of the run. I derped and went down at the start of the chapter. This maybe cost about 3 seconds or so in total with having to go back up. This is the only mistake that I'd consider 'major' in the whole run. That combined with me taking the Riddleton segment kinda slow because I'm not as familiar with the RNG manipulation in the NA route made this the chapter with the most time that could be gained in future runs.

Chapter 6: I think this one went perfectly. Handwriting recognition hiccupped on puzzle 75 but not as badly as it could have.

Chapter 7: Perfect all round, except for me forgetting where exactly the hitbox for puzzle 116 was on the hut. Whoops.

Chapter 8: No problems at all, everything went perfectly.

Chapter 9: Puzzle 94 was pretty bad and I should feel bad. I got a bit mixed up for this one, after a fast reset I got back on track and went on to finish the game with no further problems. Puzzle 100 was by far my best attempt at it, managing to not accidentally deleting any lines at all.

My overall analysis of this run is a very strong one, the only real standout failures being the pathing of chapter 5 and the reset on puzzle 94. But everything else went SO well, especially with regards to handwriting recognition, that I personally feel this run is SDA-worthy. Thanks for reading/watching!