Released in October 2005, Quake 4 picks up where Quake 2 left off. It's another orgy in graphics and violence, as expected from id and their partners. Some new elements such as vehicles and squad fighting are added, along with some new weapons. You play as Matthew Kane, a member of the elite unit Rhino squad. The human forces are making their final assault on Stroggos, home planet of the evil strogg race. As Rhino squad is being transferred to Stroggos by a dropship, the ship is hit by a missile and crash lands in the middle of a battlezone. Armed with a headache and a blaster Kane begins his long journey to conquer Stroggos. 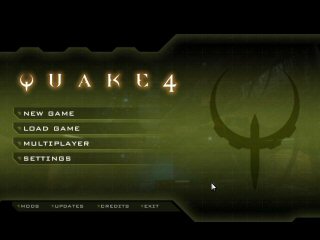 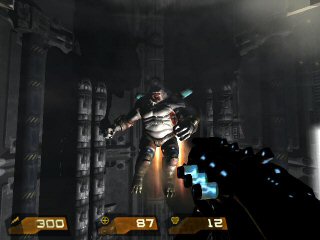 Timing note: Time stops after each fade to black at the end of a level ends and resumes after the loading screen disappears. Half a second added per save.

This run was done using version 1.3, which was the latest patch when this run was started.

Thanks to InsaneB4st4rd for various tricks, strategies and shortcuts and route testing. With all the stuff he contributed this is more like a team effort, but I did all the running ;-P

This is my last Quake 4 run on Private skill and finally I got my ultimate revenge on Raven software. They thought they could make this game speedrunner hostile by adding crap like invisible walls and stuff all over the levels, but they never counted with the brute force of the people at SDA. Have at you, you invisible-wall-adding-lamers!

This run is not only faster than the last one because of a bunch of new tricks and shortcuts. My Doom 3 nightmare project gave me a lot of experience in running Doom 3 engine based games, and also to keep the precision even though I'm forced to play at 30 fps while recording. Especially when I strafe jump, which is something I didn't master in the earlier runs. For this run I finally decided to use the autosaves and one segment per level, and no exceptions this time. Thanks to this decision you wont have to watch a lot of boring loading screens and saving/loading. Now, lets see how long it takes for Raven to get a patch out with like 600 single player fixes to prevent people from destroying their precious game even more.