Released in June 1998, Quest 64 was the first RPG on the N64. Hopes were high after promising previews showed a unique battle system, inspired monsters, and sprawling towns. In the end, Quest turned out to be a mediocre title due to the developers rushing it to market for fear of Zelda. Brian, a magician's apprentice, sets out to find his father, recover the legendary Eletale book, and banish the evil known as Mammon from the world of Celtland 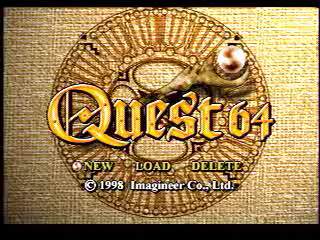 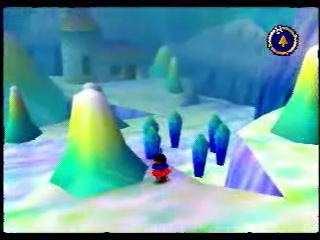 I've gone and done it. Why did you make me? Yes, the laborious Quest 64 has been taken down in under three hours. I'll save you the trouble and tell you the secret right here: earth and water, baby. I also avoid virtually every enemy battle as well, which isn't very difficult compared to other RPG's since all you have to do it make your way to the edge of the arena. The only times I fight enemies are at the beginning and right before Zelse (where I get three spirit gems from a single fight).

You may notice that in the over world I don't usually hug corners or go along the inside of curves when enemies are about. This is to prevent Brian from becoming trapped with no where to go (i.e. the boundary will go 'inside' the wall, making me run much further and take much more damage).

Early on I only get enough water for the heal spell, which is needed to get across the overworld. The rest of the spirits goes to earth until it is maxed.

By the time I get to Nepty I'm busting out the avalanche, which has the potential to do 2-300 damage per turn, which, when combined with barrier, makes for an unstoppable combo. I use this the rest of the game.

The only problems were the randomness of both barrier and avalanche. Magic barrier sometimes protects you for two turns, sometimes only one...so there's some fun when it dies or "misses!" unexpectedly and I have to run around and heal frantically (all the bosses from Zelse onward can 2-hit KO Brian). I found the best way to aim avalanche is to position the target several spaces behind Brian and to the right (or, from Brian's POV, back and to the left). It doesn't hit them always but when it does it's devastating.

My main concern throughout this project was a lack of mana for my spells. Since I'm rushing through the game like crazy I don't give much of a chance for my MP to grow, so even by the time I get to Mammon it's only 25! I had to be very frugal with the MP healing items and I collected pretty much all of them in the game, save for one in the blue cave and a dew drop in the mine. And the secret Shamwood area, but that's a given.

At the end even with all that I couldn't do it. I thought I was screwed and I was starting to research to see if I could do some other elemental combo...then I saw that with water at 40 you can steal magic points from enemies! Unfortunately, I had to backtrack a little bit and get some not-so-efficient spirits, but I worked it all out in the end. I loved the spell so much I actually ended up with excess healing items at the end.

So if anyone out there is, y'know...thinking of

I have to giggle watching the fight with Mammon. He's so big that avalanche just rocks the hell out of him and causes him to shake violently. Speaking of Mammon and his dimension, the enemy called "Pinhead" is a freak! He does like 170 damage in one shot! What a cheater -- you're not allowed to do more than the last boss...

Enjoy. Actually, watching the "dungeons" might be a good cure for insomnia...