The conclusion of Lori and Corey Cole's RPG adventure series, Quest for Glory V is the only game that had no input from Lori's husband. There no longer is a battle screen at all, instead the game increases its action-RPG throttle, making equipment upgrades a key to staying in fighting form. The game still offers multiple classes, paths and solutions to puzzles and allows the hero to woo one of many females featuring in the adventure. 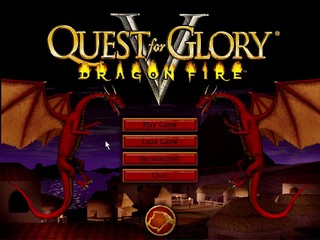 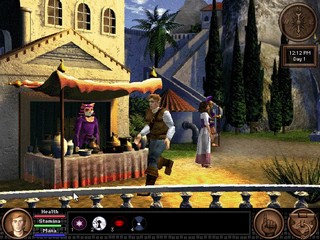 This is run on the GOG.com release.

Of course, I want to thank SDA for hosting such a great service. It is always my first place to check for speed runs, and the community is always super friendly and helpful. No trolls on these forums that I've encountered. :)

I absolutely HAVE to mention the Hero-U forum, where I learned of the glitch. Corey Cole, one of the creators of the game was discussing some of the sequence breaks in the earlier version, and I mentioned that I planned on running Dragonfire next. A user named Tenata pointed me to a QuestformoreGlory forum thread which detailed a glitch that skipped 95% of the game. The original post was from 2007, and the user on the QFMG forum was named Galahad. Without these, this run wouldn't have been imaginable.

Finally, as a minister, I have to give credit to God for giving me a little extra leisure time to practice the series of games I enjoy.

The current Any% New Game run without glitches is in the 50 minute range. This skips so much it absolutely has to be its own category.

Because we are skipping more of the grinding and events, our character in a new game would be VERY underleveled. I have tested it with a new game Wizard, and this route is the same, but the damage output is less because Frostbite does not start with 400 skill. For this reason, using a maxed out imported character makes the most sense. Frostbite just does insane damage, and the other spells are for speeding through the areas.

The Spacebar can be used to skip most of the dialog, and the Enter key gets through the abrupt prompts. Some dialogs cannot be skipped.

CHARACTER CREATION:
Don't need any more points; we are beastly enough. We skip the point allocation for this reason.

IN TOWN:
Don't need any of these guys, either. The dragon will be dead tomorrow anyway.

THE GLITCH:
At the town gate, you'll see that I line up and cast Frostbite through the wall. I am actually hitting an assassin character that doesn't appear until the end-game. For some reason, he is hidden in the area for the entire game, but uninteractable. Because Frostbite in an AOE attack, it hits him and quickly kills him. This triggers the final rite to start, which normally requires (at current speedrun timing) about 50 minutes or so to reach.

It is several seconds faster to run back to the palace rather than sleep at the inn. This can be demonstrated by the time of day. In most runs, without error, the hero will finally lay down in bed at 12:32PM. I arrive at the palace by running there at approximately the same 12:32PM, with no need to see the sleeping animations. This should save about 5-8 seconds.

THE MANSION:
I try to Frostbite kill the first goon, which usually works, but instead run past him and dazzle instead. No real time loss, just some MP. Dazzle gets past the guards that can be skipped, and Frostbite kills the manditory ones. The Paladin does have an ability called "Awe" that would make this scene faster, but it requires 475 Honor to get, and thus would be slower. Open gets us in the house. Inside the mansion, I use the keyboard to control and get our main hero upstairs, which lets me use the Dazzle spell and keep the badguys in place.

Next, I use the drive-controls to walk my character closer to the minotaur and cast Frostbite, all while skipping the dialog of Minos above. The Minotaur can't take damage until Minos is done talking. Once all of the baddies are dead, Minos kills himself which releases the Dragon of Doom. You cannot skip Minos' speech, unfortunately. You have to collect the Minotaur's Axe, search Minos' body, and check in the potion room to trigger Fenris coming and teleporting us to the Dragon. The goons lying in front of Minos' body ALWAYS take priority in searching, but it is faster to kill them at the door and click through the items.

Those potions through the door help with finishing the Dragon off.

DRAGON:
I get the Monster and the Minotaur to help me fix the pillar, and then immediate ask the Monster to sacrifice himself which kills the Dragon faster. After that, it is a matter of the Dragon's RNG staying in the same place. I've done a lot of testing, and if you wait to cast Frostbite the Dragon lands sooner, which results in a much easier/faster kill. Targeting in the air is... inconsistent.

Better controls and better RNG. The route is about as minimalist as you can get. Particularly, time could be saved by killing the Dragon faster, which is a matter of RNG as to where he is or if he lands. This isn't too bad, though. :) I'm happy to have seen QFG5 get utterly trounced.