Developed by Rare and released by Tradewest in 1992, R.C. Pro-Am II puts four sets of wheels on a track and your hands remotely on one of them. There are hazards and obstacles to avoid and the AI likes to cheat. 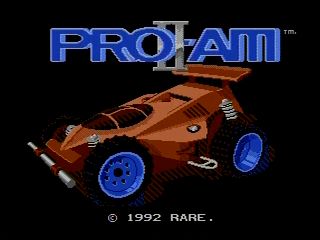 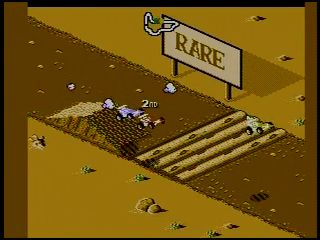 For information about speedrunning R.C. Pro-Am II and to get a better understanding of what's going on in this run, go to the guide in the SDA knowledge base (referred to as sdakb in my comments below):
https://kb.speeddemosarchive.com/R.C._Pro-Am_II

Run comments
I'll comment here on noteworthy events of this particular attempt. There are minor execution mistakes that should be fairly obvious to the watcher, so I won't comment on all of them. For more detailed level comments and about various aspects of the game mechanics, refer to the guide in the sdakb linked above.

Race 1 I try to manipulate the letter in this race by pressing start at the right frame on the map screen. The best outcome is an 'M', which I managed to get this time. It's a 1-frame trick, so far from guaranteed, but it improves the chances of early upgrading the car by quite a bit.
Around this session, I experimented with collecting the dollar item next to the two zippers. The downside is that you don't get both zippers, which costs around half a second. In hindsight, I didn't need the extra money, but often I do.

Race 2 Having three letters after this race is almost a requirement for upgrading the car after race 6. I therefore took the detour for the letter on the left side, which cost around half a second.

Race 6 Usually, I try to collect the upper of the three letters right after start. It's normally not a problem to get it and the zipper, but I must have missed the letter this time. Luckily, I tried a second time to get it on the last lap and that completed the letters for the first car upgrade. Getting the upgrade after this race is the ideal situation (race 4 is possible, but basically TAS-only).

Race 7 Missed a zipper on both laps. Since it was in the area with three zippers in a row, the time loss was pretty small though.
This was the 7th race in a row, where I got a start boost, which is exceptional for me. I'm usually having big trouble getting them. I'm not sure if it's because of overall slow reaction times or the fact that I'm playing on LCD.

Race 8 Not a great race. I missed both the nitros in the S-curve in the lower left corner.

Tug-o-Truck 1 A bug appeared with the timer. Instead of ending with a time of 89, the timer said 99. First time I've seen this. No impact on anything in the run though.

Race 9 Missed both letters on the first lap. I always sacrifice the second zipper for a letter in both laps, so it didn't really change anything.

Race 10 Good race, but I missed the left letter on both laps and that unfortunately ended up costing me the second car upgrade after race 12.

Race 12 If I had collected the 'A' in race 10, I would have been able to upgrade the car after this race. I've only done that a few times, but I still don't consider it that exceptional if the first car upgrade was completed after race 6. The two additional races with the first car upgrade probably cost 3-4 seconds. Otherwise a good race.

Race 13 I managed to get the nitro on the first stretch, which is good and usually not the case. After this run was completed, I learned that you can save a few frames by collecting the 1-up and thereby reduce lag.

Race 14 As mentioned above, I could have gotten the second car upgrade earlier. Race 14 is still the most common though.

Race 17 One of the worst races. First I missed the nitro in the lower right corner. That probably contributed to being closer than I wanted to the green car on the second lap. Quite often, I take a hit from a missile and I decided to play it safe this time and avoided the first zipper on the second lap.

Race 19 This used to be one of my favorite races because of basically going at constant zipper speed. Lately, I've had a tendency to miss one of the zippers, which was also the case in this run.

Race 21 Thanks to the many start boosts, I could buy the Mega motor before this race. Normally I have to wait until after instead. The better motor helped save around 2 seconds.

Race 22 Both the area around the jumps and the one with the bumpy sections tend to lag quite a lot. I was pretty lucky in this attempt to mostly stay clear of the other cars, which helped reduce lag in these sections.

Race 24 The blue car almost always grabs the roll-cage on the first lap and it's common to crash because of it. I played it safe this time and spent a bit more time than necessary in the S-turn in the lower left to give it some distance.

Race 27 This race is identical with race 19 and unfortunately I missed a zipper in this race as well.

Race 29 Getting the nitro on the right side was a nice bonus. Most of the time, the blue car gets there first.

Race 31 With some luck or a start boost, you can get the nitro on the left side. Unfortunately it didn't happen this time.

Race 32 Together with race 35, the most difficult race. The other cars are difficult to keep up with and you normally need to negotiate them having weapons as well. I took an extra wide turn around the U on the second lap to avoid getting ahead of the yellow car and risk getting shot by a missile.

Race 34 The detour for the roll-cage is well worth it. The green car will always try to get it. If it does, it will slow you down around the U (or become extremely risky if you try to overtake it).

Race 35 I rarely get the nitro on the start stretch, even though it's definitely possible. The straight after the airplane got extra lag by spinning the yellow car. It's not strictly necessary to do this, but it increases the chances of passing this race, which is possibly the hardest one.

Race 36 Just like in race 22, I got lucky with the laggy sections and could pass them without too much interference from the other cars. It's harder in this race though, so I consider myself extra lucky to have managed much of the potential lag.

Final thoughts
Normally, speedruns always take longer than I first expect and once I get a run I'm happy with, it often feels overdue. This was definitely an exception. After several pbs that just felt like steps on the way towards something, but still far from the goal, this attempt came a bit out of nowhere and much sooner than I would have thought.
I had no crashes (my previous best was something like 3-4 crashes), the letter RNG was good (upgrades after race 6 and 14), several more start boosts than I normally get (both saving time and allowed me to purchase Mega one race earlier than I usually do) and several race elements that can be tricky went my way (got the nitro in race 29, got the roll-cage in race 34, less lag than usual in races 22 and 36 etc). During sessions following this run, I wasn't even close to keeping up with my splits. There are still several mistakes and the run is very beatable. However, I must admit that it's a level or two above what I consider to be my current skillset. This game is a lot of fun and I'd like to continue playing it, but I don't think I'll lower this time any time soon.

Credits
A key to this speedrun was understanding the letter RNG. When playing the game, I noticed there were patterns, but couldn't figure out the game mechanics behind them. After asking for help on tasvideos, FatRatKnight replied and provided very valuable information about various game elements and the letter generation algorithm in particular. This game is still very RNG-dependent, but it has improved by quite a bit after FatRatKnight's analysis.