Released in February 2013 by TRU FUN Entertainment, Rad Raygun is a side-scrolling platform game with gameplay similar to the NES Mega Man games. It is the year 198X. Big hair is hot, and the war with the Soviets is colder than a refreshing glass of New Coke. RAD RAYGUN must travel the world fighting communist robots, and save the 1980′s by shooting his way through 5 decade spanning levels. Ultra sharp 144p resolution graphics and 4 unique shades of monochrome off-green bring Rad Raygun to life, as only 1980′s mobile technology can. 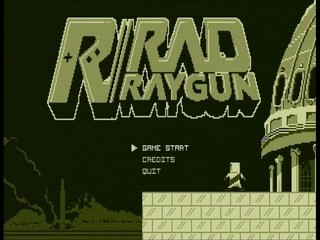 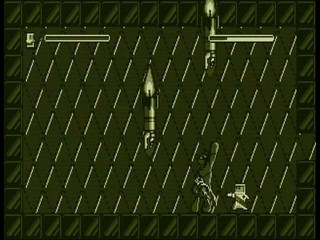 Big shoutouts as always to everybody at SDA for everything they do for us! I need to give extra big thanks to all the other Rad Raygun runners who helped me with routing and general techniques: Sir Fist, ozzy88, Satoryu, and MilsTailsPrower. Warning: most of these comments are just stolen from my old submission. Sorry for the repetition.

Rad Raygun is a game I never heard about until I saw Sir Fist's submission on The Sunday Sequence Break. I was immediately interested, but only had like 20 MS points or something and didn't want to spend $20 just to spend $0.50 worth in points. After I bought Battleblock Theatre though, I had some leftover and decided to finally buy this game. Best $1 I ever spent.

This is an incredibly broken game. Half the walls have holes in them, and most of those will crash the game. With the air backdash you can superjump and infinite jump, which basically tears this game wide open. The superjump can force you into/through almost any ceiling in the game. I'd try to explain more than that but there's no point. It's super broken.

This game has a built-in stage select, so you can go the final stage literally the same second you gain control. Because of this, the Rad Raygun runners decided to run the "all bosses" category, which plays through every stage. We can still stage select, but we must finish every level.

The fastest way to beat this game is to stage select to Berlin immediately to get the air backdash, and then stage select to level 1 (Washington DC) again and play through the game as normal from there. Air backdash lets us skip basically the entire first level, so it is definitely worth the detour.

Movement is very simple. Whenever possible, I want to alternate sliding and backdashing on the ground. Whenever there are enemies or blocks on the ground in my way, I'll just infinite air backdash over them. That's all. The only thing to be careful of is backdashing through a screen transition, because the game usually gets locked there and scrolls between screens for like 5 transitions. Whenever I am approaching a screen transition, I try to make sure I am always sliding through it. The most awkward part is that there is a substantial delay after every slide/backdash if you let it finish. If you press down mid-slide/backdash, you can do it again immediately. I try to do this, but the controls are super awkward for this sometimes and just flat-out refuse to cancel.

That's all. I'll do some short level comments I suppose:

Movement is awkward until I get the slide because I only have air backdash. I surprisingly was actually using it competently here in this run! This stage actually went perfectly until the final clip into the boss chamber. This was a new find that saves a bunch of time, but it's somewhat unpredictable. Sometimes I go clean through, but other times I get stuck in the transition for awhile. When the latter happens, as it does here, I have to let the last text window idle until I land on the ground or else I cannot setup the AI loop on the boss. I have no control over it as far as I know, and it costs like 2-3 seconds. The rest of the level was ideal though.

This is my favorite stage. I really enjoy the music, and it is packed full of neat tricks. This is a pretty strong run of this level until the very end when I backdash the wrong way before the tank enemy. Not a real big deal, but it's just sloppy. The boss RNG was not ideal, but it was very above average. That's the main goal for this stage. Haha.

The very first room is another new strat. I used to just fly through the sky there to avoid all the spiders and soldiers, but it is MUCH faster to crouch-cancel slides and just air backdash over obstacles when they present themselves. Sir Fist pointed out a faster zip in the middle of the stage which saved a bunch of time, too. There were some other options for zips (one of which went directly to the boss chamber, but skipped a power upgrade), but this is the fastest I've found.

This is a really hard stage. This run went pretty well, but there were two hiccups. First, I triggered two extra screen transitions in the first superjump because I jumped too high. Second, I triggered the reduced-ammo glitch during the boss fight, so I could only have 2 bullets on screen instead of 3. I'm not sure what causes this but it is very common in this fight. Somehow my boss fight was extremely fast even with that, so it's cool. My level navigation was extremely good in this stage too, so I actually gained time over my previous run.

Perfect stage. Perfect boss RNG. I am SO happy I got this. Haha. Good RNG goes a loooong ways.

Ok. This stage. I use mostly the same route as my previous run for the first half of the stage, but make a pretty significant change in the second half. I used to navigate through the intended rooms, just a bit quicker than normal thanks to the superjump and whatever. I now just fly OoB all the way to the 2nd last room, and then hope that I get good RNG on the clip through that room. This OoB is RIDICULOUSLY RNG-heavy. There is one invisible wall in the way, and clipping through it seems entirely random. Sometimes I go right through, and other times I get stuck forever (see my AGDQ2014 run for an example). To make things worse, if I screen transition upward, I die instantly. For perspective, I need to clip through the invisible wall on like the 3rd tile from the top. Really picky.

At the end of that OoB, I need to trigger the screen transition in the very corner of the room so I get stuck in the ceiling, and then I need to superjump/zip to the left without moving to the right any significant amount. If I move too far right, the game won't let me clip through the ceiling and I get stuck or ejected to the left. Even if I space it properly, it still sometimes won't let me through. It is extremely frustrating. I've lost a lot of attempts from this clip just simply not working.

The other major improvement is thanks to Satoryu! He found that you actually CAN drop off of ladders. You have to hold down and fire the cannon to drop off them. Yup. Down + cannon. Awesome. So yea, that actually saves several seconds from the very long ladders in this level, and it saves me a LOT of frustration. Thanks, Satoryu!

Now, in this run I accidentally air backdashed the wrong direction a few times, I got the invisible wall clip in the new OoB in my first try, I got back in bounds after that OoB on my first try, had really good execution in general for the entire level, and then had absolutely terrible luck on the final boss. Ideally the second form will just standing in place and fire at me, but he flew around a bunch instead. I lost a lot of time there. I was able to actually get the correct strat on the final form this time (escape the room and mash from the slide-tunnel), which is awesome. Overall, this stage was a huge time gain over my PB, but still left a lot on the table.

This is a really fun game to play, but running it is very frustrating. The menu is super clunky and the ladders are really frustrating to deal with. The run basically comes down to boss RNG and OoB RNG in Moscow at this point, and the optimal patterns are so insanely rare I don't even care to try for it. If the execution is cleaned up and I get perfect tank boss and final boss patterns, I can probably save 20 seconds. Realistically it's probably smart to aim for 10 seconds faster (can be done simply with perfect final boss luck and similar luck everywhere else), but I won't be doing it. I am happy with this improvement. If someone else wants to try to improve this, I wish them the best of luck!