Released on March 14, 2003, Raven Shield is the third installment in the Rainbow Six series of tactical FPS games, putting the player in control of a fictional counter-terrorist unit called Rainbow. Those familiar with traditional shooter games will notice a change of pace: the player's movements affect weapon accuracy, jumping is absent, and firefights are brief; enemies - and the player alike - are easily killed outright after sustaining only a couple of hits. 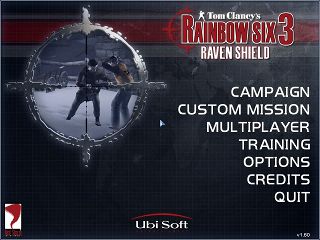 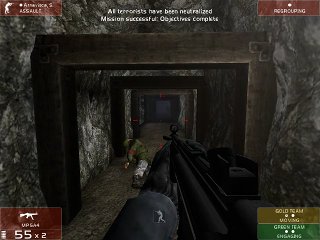 Phew! This is my first speedrun. I hadn't heard of any Raven Shield runs or exploitable bugs before beginning this run, so the few tricks which I used in this run were simply all the ones that I managed to find, and unfortunately, none of them allow for any extreme time-saving.

Since I don't have any previous Raven Shield runners to thank for providing me with any tricks, my thank-you list is rather short:
Mike, for answering my incessant questions about various timing issues and game bugs, and for coordinating everything,
Nate, for juggling and encoding my 14 gigabytes of source files,
and the verifiers, for scrutinizing the video (and plan files and campaign files).

For each mission I have stated how many kills my team got in total by the end of the mission, as well as the total number of terrorists that may be spawned in each instance of the level (according to my observations).
The timestamped comments assume a 5-second Station ID at the beginning of the compiled video, and 60 FPS video (for the framenumbers from 0 to 59).

Last summer, I started attempts on a segmented Elite run of the campaign, but gave up after a while, managing 88 seconds on the first mission without injuries, and 69 seconds with many team members getting creamed.
This summer, I saw a very poor but rather boastful solo "speedrun" of a 35-terrorist Penthouse Terrorist Hunt on YouTube (q8cVAAxPDZ0, 3 minutes 7 seconds), so I decided to make my own better but still poor one (io_OsEX-BVk, 2 minutes 4 seconds).
The next day, I tried running Mission 9 of the campaign (Penthouse, "Shattered Glass") in Practice Mission mode (on Elite skill, but that doesn't really change much in this mission), which I managed 41 seconds on.
Two weeks later, I saw that Tigger77 had posted a Quality Test topic for Raven Shield on the SDA forums, showing an attempt of the first campaign mission on Recruit skill, so I decided to start my own IL run of Raven Shield on Recruit skill.
I figured that running each level in Practice Mission mode made re-running of levels easiest, and perhaps made the most sense, since the levels are clearly independent apart from injuries being carried forward from previous missions, and the cumulative random stats improvements to all the characters over time. However, since I didn't think an IL set with Chavez dying in multiple levels would be very meaningful, I decided to disallow injuries across all missions except for the last mission (ouch!).
Upon completion of the IL run and discussing it with Mike, he suggested that it might be best to rerun the game segmented in Campaign mode, so I did that, and got an equal or better time on each mission (making use of the fact that character injuries and deaths were certainly allowed this time).
(My Practice Mission times on Recruit skill without injuries were, in seconds: 59 50 50 56 49 40 57 53 42 53 47 35 57 63 65.)
So, additional thanks go out to the boastful guy on YouTube for the poor run of the practice level, Tigger77 for encouraging unaware my run of the game on Recruit mode, and Mike again for suggesting re-running the game in Campaign mode, resulting in an improvement of 79 seconds!
Final thanks go to Smilge's Baldur's Gate 2: Shadows of Amn run, which I copied the smiley face drawing idea from. =)

If you have successfully read through these ten thousand words of blather, congratulations!
I hope you have enjoyed the run, and have learned something new about running the game. Thanks for watching!