Ratchet and Clank Future: Tools of Destruction was released in October, 2007, and follows the duo's fight to save the galaxy...again. This time, Tachyon the Cragmite is bent on world domination or destruction, whichever comes first, and uses Ratchet's own murky past to weaken the resolve of the galaxy's most prominent Lombax. Only by combining their talents with that of Talwyn Apogee and a mysterious race of creatures called the Zoni can Ratchet and Clank save their home. 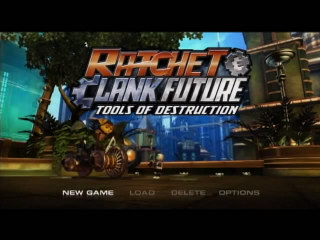 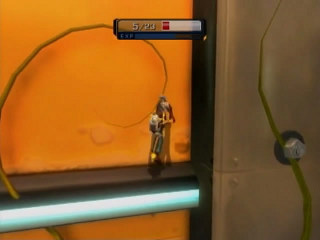 All segments with audio commentary are available at: http://www.youtube.com/user/SwedishGamePros

This run began as a faintest notion before becoming the epic project you see finished now. I chanced upon SDA while looking around youtube, and was immediately hooked by the casually competitive atmosphere. I had been playing games for more than there intended purpose --things like challenge games or low% runs-- for a long time, and speed runs fell into the same category. Naturally, I decided to complete a run immediately. After browsing the game list for a while, I settled upon a great game that didn't have a run up: The Elder Scrolls IV: Oblivion.

Now, obviously that run never materialized. I found that, as much as I loved logging hundreds of hours in Oblivion, I wasn't ready to speed run it. I quickly lost interest in the fairly linear path of Oblivion, and began to browse my other next-gen titles for a suitable replacement. Tools of Destruction filled that quota.

This is a good run. It isn't a perfect run, but it is a good run. The route, in particular, is excellent. The extent to which this run glitches Tools is almost ludicrous, and even the fairly difficult bosses are tackled quickly despite being severely underleveled. The play quality is pretty good, although some of the more difficult segments have 9+ seconds of mistakes. There are only overall around a minute of mistakes, at most, in the run. I wish that there could be less, but some of the glitches used require surprising amounts of precision, finesse, and blind luck. I am overall happy with the consistency of my playing.

A few notes to future runners:

The vast majority of the weapons are useless. Besides the Pyroblaster, which this run uses, the RYNO is the only real option for boss killing. The other tempting options are the Tornado Launcher and Nano Swarmers, but neither has the raw damage output to actually finish a boss by itself. Perhaps you could level two weapons? I'm putting my money behind the Pyroblaster, but feel free to experiment.

You should of course try to improve the route, but I'm fairly sure that we found nine out of ten useful glitches. Good luck, this game is certainly plenty buggy for you to glitch.

Some armor might help with Tachyon, if you can find a really really fast way to get more bolts. Unlikely.

Now, time for the segment-by-segment!

Hard-ass segment, probably the third most resets of them all, and I actually got really lucky with this attempt.

Metropolis was pretty much perfect and is a great introduction to the run. Both of the first glitches are incredibly luck reliant, and many runs ended less then a minute in. However, when these three glitches are used in conjunction, this becomes an incredibly short planet. Perhaps 1 second lost.

Cobalia is a little bit messier. Only 6-8 seconds of mistakes, and there's another totally random glitch that works perfectly. After getting all three of those to work first try, (which has only happened three other times, always followed by a long and stupid mistake) accepting this segment was a pretty easy decision. A human being could probably only get this done around 3 seconds faster before going insane. Also, we farm leviathan souls for a couple minutes, this is the fastest place to get them.

Three areas in one segment! Woot... At least it begins with Kortog. I really love the look of Stratus City, and I hate the Hall of Knowledge, so of course we skip it. The skips on this planet aren't anything mind blowing, but they save around 2:30 collectively. The fight room at the end of the planet goes really well, memorizing spawns ftw. A perfect run would be around 1.5 seconds faster.

Fastoon...the lightbulb skip, and then nothing else. I think my route to collect the flight components is pretty optimal, it sure is faster than the others I found. Clank is slow and glitch-free as always. This planet accounts for quite a bit of bolt farming. Maybe 2 seconds of mistakes, if even that much. Yet even those are balanced out by some really good luck with the clustering of the enemies.

Voron is an on-rails segment, so no speeding it up. I don't miss any ships of raritanium, so I'm Mr. Heavy pockets in Mukow. The boss isn't perfect, possibly 2.5 seconds lost here. At least I did a good job weaving my shots through his missiles.

Just one planet, so at least it's a pretty segment. Only one real mistake, and that's right at the beginning...of course. A little jumping hiccup later on costs another .5 seconds. Perhaps 1.8 total or so...I don't really know, I just see that Mukow is glitched beyond repair and the arena fight goes down almost perfectly. A nice clean segment, and we finally have a decent weapon; the Shard Reaper.

Annoying, but not particularly difficult.

The only difficult part of the segment is the skip right at the end, which saves 30+ seconds. It also has a success rate of around 1/60...so this took quite a few tries, but I wasn't likely to make any mistakes in the earlier areas. If you want to see what "exploited" means, just watch the gravity section...beautiful skips. A great, very clean segment overall. Perhaps 3 seconds faster if TAS'ed, 1 if played by a human. We pick up one leviathan soul here.

I hate ardolis, but this isn't the hardest segment. All of the fighting, and the few skips we managed to find, went down well. Not much to comment on, I just really hate Ardolis. In particular, the pirate room fight is a good example of abusing the groovitron. This could be a few seconds faster, but overall pretty good. The geo-lasers are very fast using the analog stick. The flying level is very good, the boss is excellent.

This segment had an awful lot of restarts behind it. Even with this very good attempt, this could be 7-12 seconds faster...I just couldn't take it any more. Perhaps a computer should do this run and show me up, but I was just happy when I achieved three things;

1: No deaths or runs to the vender in Rykan; I did this very well, all of the fighting was handled well and the spawn-killing was beautiful.
2: Both Sargasso skips first try after a good robo-wings; one of my best robo-wings, employing a technique I discovered to travel faster.
3: Good pattern in the Arena; the boss gave me one of the best patterns I've ever seen, and I handled the pre-fight very well.
This segment has it all; fighting, glitching, decryptor, robo-wings, boss...I am pretty happy with accepting this segment. I just really wish we had found a way to skip Rykan...

Kreeli is BEAUTIFUL...I love the glitches on Kreeli, and they allow us to save a cubit shitload of time. Clank ruins all of the fun, but the rest of the segment is really really good. One of the planets that I'm happiest with, especially since the ship-jump in the beginning can be very difficult to execute.

Long, but nothing too difficult in any one place. Plenty of opportunities to be one-shotted though.

Ah, Zordoom...the leveling segment. This is the longest segment, and longest planet, of the run, and for good reason; although we do have a few really great skips here, (the grind rail skip comes to mind) the sheer amount of death abuse Pyroblaster leveling accomplished is astronomical. Feel free to make all sorts of arguments about how it is possible to beat this game without power leveling, but you'll be totally wrong. This was the fastest place to do it. I made a few silly mistakes, but only around 6 seconds could be saved by a non-computer player...and with this many chances to randomly die, not to mention two skips that require highly precise movements, this is an easy accept.

Verdigris is flawless, the boss battle is incredible. Verdigris could not be beaten even a second faster.

Razor claws ftw...they (when used improperly) work just like suction cups, and allow us to destroy the final few planets. This segment exists purely so I don't have to do this planet before/after the surrounding segments...it really doesn't deserve to be alone, but it sadly ended up being.

Three planets in under ten minutes. Razor Lawls. Nothing to really say. Could be 3 seconds faster or so, but hey. Slag goes down easy, and I did really well against all the Cragmites I had to kill. Igliak is the shortest planet of the run.

Hardest segment...unless you use lol cheap suicide strategy. Then its still hard, but maybe third or so.

Yes, I suicided for almost a minute before fighting Tachyon. Watch the audio commentary to hear my thoughts on it and my justification; believe it or not, this is the fastest way to beat him. If someone found some sort of ungodly way to avoid his unavoidable instant-kill attacks, this could only be 15 seconds faster at most...and if it wasn't already clear, so way to do so exists to my knowledge. We glitched him, we manipulated his attacks...but this was the best we could manage.

The obligatory thanks:
First and foremost, thanks to Bjorn, the other half of the SwedishGamePros. He helped glitch, plan, record, and motivate me to finish this run.
Thanks to all of the SDA admins and so on, you guys do an invaluable service by giving oddballs like me places to rant for free, and even host our videos!
Thanks to the whole crew from the thread, no I'm not going to list you. You know who you are, you don't need me to tell you that ; ) Your encouragement was instant gratification for our efforts and helped me push on past long days of failed recordings.

Insomniac, watch out; we smell blood from the dying carcass of ToD, and the rest of the Ratchet pack will soon suffer the same fate.

BJORN'S COMMENTS:
Segment one: Metropolis was bent over and taken advantage of. Cobalia went well, a few mistakes, but overall good. If only that wilderness skip worked...
Segment Two: Pisses me off. I'm not sure why. It's probably because there was a clank section. We had some good skips though.
Segment Three: Charge boots win. Arena fights fail.
Segment Four: Who needs gravity?
Segment Five: Not many skips, but overall good segment. Not much to say here. The pirate fight room sucks.
Segment Six: If only there was a way to skip both fights...
Segment Seven: We win. How about that no claws teddy bear?
Segment Eight: Zordoom. Sigh. Long and boring. Good grind rail skip though.
Segment Nine: RAZOR CLAWS.
Segment Ten: We got a TRIPLE! Three planets, lots of razor claws.
Segment Eleven: Unfortunately we decided death abuse was needed for Tachyon, but our final time was still under five minutes. Oh, and lots of razor claws