Ravenloft: Stone Prophet is a first person RPG based on the popular AD&D campaign setting of Ravenloft. Unlike your tabletop games it does not follow a storyline about getting a little too closely related to a werewolf. I'm looking at you, Jeff. 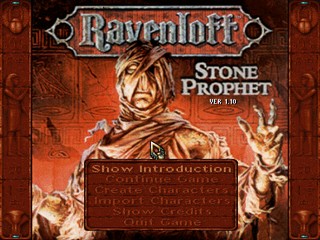 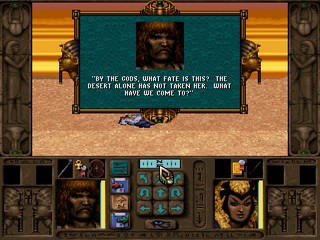 Ravenloft: Stone Prophet is an RPG by DreamForge Intertainment. The main point of attraction is its Egyptian theme, which gives the game a very distinct atmosphere. If you haven't played the game before I'd definitely recommend giving it a go if you can find a copy, preferably before watching this speedrun so the ending isn't spoiled for you :).

The game is fairly long, with normal playthroughs taking about 20 hours to complete. On one of my more recent runs, it occurred to me that the ending of the game is within very close reach of the beginning. I started wondering if it would be possible to somehow skip to the end and after a few attempts, found something that worked.

This speedrun takes advantage of one glitch in the game. The Wall of Ra - a lethal flaming barrier around the game world - insta-kills the party if it ventures too far away. The final item in the game, which starts the endgame sequence when used, is located inside the Wall of Ra. This is supposed to make it unreachable until the end of the game, when the Wall of Ra is temporarily disabled. However, a glitch allows the party to use the "Jump" spell / ability to avoid the instant death effect of the wall, allowing them to survive just long enough to use the item and finish the game.

Using the above glitch, the speedrun is then reduced down to the following:
1. Start the game
2. Obtain the Jump spell / ability as quickly as possible
3. Jump into the Wall of Ra, landing next to the final item
4. Use the final item to finish the game

The final time is so short that I also included the intro and ending sequences as a point of interest for anyone watching the video. The actual gameplay start is just after 5:00.