Released on April 20th, 2007 after near three years delay, The Red Star is part beat 'em up, part shmup and part Communist propaganda poster. Based on the graphic novel of the same name, The Red Star follows Makita, Kyuzo and Maya as they shoot people and blow up things with vaguely Russian-named Gradius and Ikaruga references for no well-explained reason. 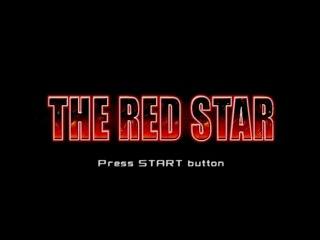 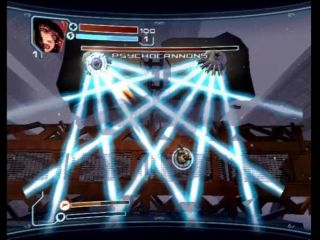 The origins of my Red Star started around four or five months ago when I was talking to Enhasa about how awesome this game was.

Speaking of Enhasa, I have to give him thanks for his stupid, yet ingenious strategy against El Supremo, and his support of the run in general.

I'd also like to thank #sda for containing idiosyncratic beat 'em up and shmup heads like myself. You know who you are.

Here is my typical IFAQ. Now with some questions that might actually be asked!

Q: Is Makita better than Kyuzo?
A: Yes, very yes. Though Kyuzo can some enemies faster, he really starts to suffer in the later stages when bullet patterns become faster and tougher to dodge. In addition, Makita has a better protocol for groups of enemies, better combos, and has a invincible dodge maneuver (the backflip). Makita's shorter attack range would be a disadvantage if she didn't have a dash and faster attack speed =/.

Q: Why does it look like you're playing it safe in the early stages of the game?
A: Because I want to collect as many S-ranks as possible early in the game.

Q: Why do you want S-ranks?
A: Because your rank determines how many points you get for buying upgrades.

Q: Then why didn't you get an S-rank in every level?
A: In the latter half of the game, I have most of the upgrades I need (melee, gun, and protocol upgrades), so getting a good rank doesn't matter as much. Also, getting an S-rank in the later stages would involve lots of conservative tactics that would waste too much time.

Q: What determines your rank?
A: The amount of damage you take. To get an S-rank, you need to take 16 damage or less; To get an A-rank you need to take less than 60-65 damage (I think). I think these requirements loosen up in later stages, but I'm not sure what the specifics are. Yes, like the Mega Man Zero series, getting an S-rank is very unforgiving but getting an A-rank isn't very difficult.

Q: Wait, if you can't take more than 16 damage to get an S-rank, then how did you get an S-rank on Kar Dathra's Guardian (stage 13 boss)?
A: Your guess is as good as mine. I usually don't get an S-rank when I take that much damage.

Q: Why do you sometimes stop hitting an enemy mid-combo when another enemy is around?
A: I'm trying to group the two enemies together, which isn't always successful, but it does pay off when it works.

Q: Why do you backflip out of your aerial slams instead of blocking?
A: Backflipping cancels the landing recovery more quickly than blocking.

Q: Why do you level up Makita's protocol? It sucks.
A: Against bosses it's nowhere near as good as Kyuzo's, but Makita's protocol has incredible crowd control. Don't believe me? Look at stage 18.

Q: Why do you upgrade protocol pack (extra bar) instead of protocol drain (Gives you more meter per hit)?
A: Because it's more beneficial to have two protocol attacks on hand for large crowds, rather than get a single bar quickly. I don't think protocol drain makes much of a difference anyways.

Q: Why didn't you hit the mages with melee attacks in stage 11?
A: You can't do that unless if the mages are summoning their green energy balls, and trying to hit the mages out of that attack with Makita is pretty bad idea.

Q: Why didn't you use the point-blank exploit on Troika's second phase?
A: I can't do it, I always get hit a couple of times when I try.

My basic plan was to power up my attacks as quickly as possible (gun 1, melee, and protocol), then focus on upgrades that let me shoot for longer periods of time (coolant and recharge).

I max out gun 1 ASAP because there are a lot of bosses in the game, and most of them can't be hit at close range.

Mistakes I made in my run:

I'll probably work on this run again someday, but after playing through Red Star at least 30 or 40 times (almost all of them taking 2 and a half hours minimum), I'm a little tired of playing the game.

No, these mistakes aren't in my other runs.

Yep, it's time for another IFAQ. I have no idea how many people read these, but I like being stupidly thorough.

Q: Your Kyuzo run is only four seconds slower than your Makita run. Is he really that much worse than Makita?
A: Yes, although he kills enemies very quickly, Kyuzo has trouble actually getting close enough to the enemies to use his best combos. Especially the red soldiers, who can attack more quickly than Kyuzo. Also, he's slower and fatter than Makita, meaning he has more trouble dodging bullet patterns. Furthermore, this run is more optimized than my Makita run. If I redid my Makita run, I could knock off at least 45 seconds.

Q: Speaking of the red soldiers, is that why you're blocking most of the time they approach you?
A: Yes, trying to attack the red soldiers before they hit you usually ends up failing. Even if you do hit them first, you're usually too far away to use your best combos.

Q: Okay, what you do on some of the bosses is so stupid. Is it really faster to stab like that?
A: Yes, it's MUCH faster stabbing bosses than shooting them. If you don't like it, too bad, because it's Kyuzo's main tech.

Like Makita, I emphasize my attacks first, but instead of upgrading protocol class, I upgrade protocol pack because you get more damage out of two level 1 protocol attacks than one level 2 protocol attack.

Be prepared to overdose on obscure questions you could never think of, for here is yet another one of my (in)famous IFAQs.

Q: How did you select Maya without a memory card?
A: I turned on the game with a memory card, then I took it out when I ran the game.

Q: What makes this run so much faster than the other two?
A: Between the spear and the wall, Maya is a boss rapist.

Q: Does Maya have any weaknesses?
A: Yes, she has trouble when she is surrounded because her melee attacks aren't good for crowd control, but with some proper planning and good wall useage, you can prevent being surrounded most of the time. Also, for some odd reason, her laser doesn't seem to lock-on properly, unless if it's targeting a boss.

Q: Why does Maya's punch sometimes only do a few hits for mediocre damage, yet at other times it does a ton of hits for big damage?
A: Maya's punch gets an upgrade with a full protocol pack. No, filling up more than one protocol pack doesn't have any effect.

Maya is by far the easiest character to plan for, since her protocol is complete garbage for a speed run (she heals herself).

Her upgrade path is similar to the Makita and Kyuzo runs initially, but after I upgrade her attacks, I splurge on upgrades that let me shoot for longer periods of time.

I grab an extra protocol pack for stage 18 because her reaction protocol is actually good against the groups of enemies, but I failed to use it effectively. However, it's not a waste because I had nothing better to spend my points on.