Released in June 1990, Rescue Rangers featured bright, colorful graphics that stayed true to the cartoon, and 2-player coop gameplay. In this game the Rescue Rangers are helping their neighbor Mandy find her lost pet kitten. Could Fat Cat have something to do with this? 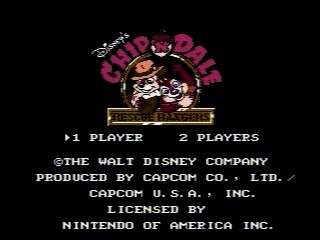 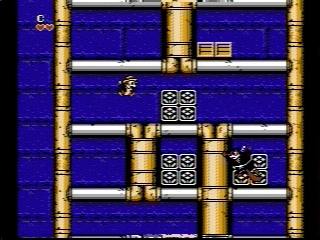 First Stage:
Not much to say about Zone 0. My upward ascents have improved in speed since my last submitted run, and I hit all the damage boosts and kill the boss quickly.

Area A:
This is one of the 3 stages not done in Any%. Not much to talk about here except climb fast. There is one intentional damage boost off of a worm about halfway up. The overall ascent goes decently enough except 1 short jump gets missed and an ignored jump input causes a short delay right before the boss door. Having the extra heart I can take intentional damage to stay on the boss, I miss 1 throw but still end up saving time overall.

Area C:
This is the second of 3 stages not done on Any%. Teh urn ender. The kangaroos suck and whoever invented them is a masochist. Fortunately this stage behaves for me and I hit all the damage boosts and tight jumps successfully. No boss on this stage since it's already hard enough.

This stage goes well. This is LOLRNG boss stage. The faucets go well, the jumps go well. The boss cooperates mostly. I get the bad pattern on the first pass, but then he gives me good passes the rest of the way. Time saved. Moving on.

This must is really good. This track is #2 in Raptor's Favorite Rescue Rangers Songs™. This stage is neat because it has a good amount of tech in it. You'll see I boost in different spots now over the previous submission, opting to boost on both sets of jack in the boxes at the beginning and then taking the lower route. In the 2nd area I go for a frameless box pickup and miss, landing on it instead. I pick it up, then forget to grab the acorn, making the jump over the metal ball very clutch. I get the backup acorn and finish the rest of the stage to the boss. I get the good RNG from the robot and kill him in 3 throws for a huge gold split.

This is the final stage not done in Any% and features 2 mechanics only used in this stage for some reason. Start of the stage goes well, but another ignored jump input causes me to sit still for a second instead of jumping down a level. I pause ever so briefly at the bugs jumping out of the bushes to make it a bit easier to jump them. The timing is pretty tough on jumping those without stopping and I'm not consistent enough yet to try. Section of the stage with the boat and the hammer goes fine. I nail a damage boost off the 2nd antlion and progress to the boss. The boss gives me great RNG and I stun lock him for the quick victory.

So this place. Remember in my last commentary how I said there's a way to damage boost off 2 of the metal balls, but it's REALLY hard? Yeah. I got it in this run. And it was the first time I've ever pulled it off. I had gotten to the point where I could get the first one, but never was able to get the second one until this run. I might have freaked out a bit which you'll hear in the Twitch VOD if you so choose to watch it. I make the ascent in the 2nd section a lot quicker than in my previous submission and save time again.

Walk right, snore. So, I nail the semi-tricky jumps at the beginning, then progress to the 2nd section. Here I do something I didn't do in my last submission. You'll see me pick up a box, then hit the 3rd antlion with it. This actually despawns one of the 2 bombs guarding the door to the next section. I get cute and try and grab the bomb in mid-air which is instant frameless pickup, but I miss and land on it instead, like the box in Zone D. Still save time after a flawless boss kill.

I really like this stage now. I used to hate it, but I do appreciate the tight jumps this stage offers. You'll see me do them. I still can't consistently get through the top part without killing the first flying squirrel so I don't try. This run is going to well to die at this spot. I start doing a damage boost off the 2nd squirrel now instead of killing it like in my last submission. 2nd section goes fine, nothing to say. No boss here, yay.

Stage starts with me FINALLY getting a frameless box pickup on the first box. Intentional damage boost off the first pelican, miss the 2nd frameless box pickup (grrr) then finish the rest of the section flawlessly. The next section is pretty cut and dry, I get Zipper and move through the stage. I get the 2 cycle on the boss but it's weird. When I land the 4th hit he breaks again right away. Not sure if that's slower than him taking off to the right and having to chase him for the 5th hit or not. Either way I still consider this a 2 cycle.

Ok, so this song is #1 in Raptor's Favorite Rescue Rangers Songs™. 1st section goes just fine, get to the 2nd section and that final boss the Ignored Jump Input™ causes me to take a hit at the weasel section. Once I get past that I jump around a little bit while waiting for the axes to move to where I can progress. It might look like I missed a jump but I didn't. I figured I'd land the damage boost off the last axe instead. I figure waiting on the first or last axe is the same anyway. Maybe I'm wrong but I doubt it. Rest of the stage goes fine. One thing to note is in the last area with weasels and crocs I don't kill them with boxes, which wastes frames. I just jump over or jump down levels under them. I get to Fat Cat. I know I should jump and throw, but I get wary since he does have a pattern where he flicks ashes super fast, and jumping when he does usually means you take a hit. I would rather be safe than sorry at this point since this run is going so well. I get the crap pattern for 1 cycle and take 1 hit, but finish him off and save time.

Overall this is a solid run, and the mistakes were few in my opinion. I saved 18 seconds off my last submitted run, and all my splits were either green or gold. I can't complain one bit about how this run went. Look for me to continue to try and drive this time down, and thanks for watching!