First released in January, 1998, this game takes places in the same city as the original (Raccoon City), a few months later. This time, you play as rookie police officer Leon S. Kennedy or as Claire Redfield (Chris's sister), as you try to escape the city. Umbrella has come up with a new, more powerful form of the T-Virus this time, which they call the G-Virus. Resident Evil 2 has been released on many platforms, including Nintendo 64, GameCube and Dreamcast. 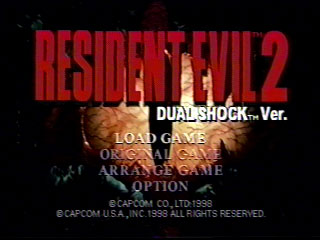 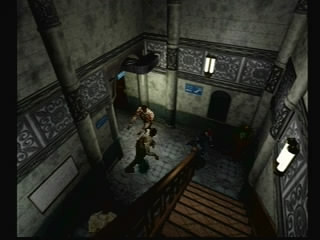 Runs on the US PlayStation 2 version:

Runs on the Japanese PlayStation 2 version: (A rank in US is S rank in JP)

Runs on the PSP version:

First off, I am very ecstatic to say that this is my first run for the site that pioneered speedrunning! I am overjoyed with how my speedrun went. I would like to thank Carcinogen, Caleb Hart, and FierceKyo for being fond of my ambitions to crush this game, sharing good tips and advice, and for just being awesome friends. I want to thank Nate, Flip, Mike Uyama and everyone else as well who manages SDA, because the site is so neat and incredible.

Intro: Think they could've extended this part a little more, but I'm just rambling =D. Anyway, decent gate section. Zombies in the bus only took the minimum to get out of the way, which was fantastic, and it made up for the 'decent' gate section.

RPD: Zombies - the only zombie I killed is the first one on the second floor. I took no damage from them in the police department except for a tricky zombie in the east side of the first floor. On the west side of the first floor, I discovered a reliable and consistent way to deal with the licker. The licker will trigger its tongue attack only, oddly enough, if you have the grenade launcher equipped and if you are at a certain angle as you approach it, allowing you to sneak by. Little to complain overall for the RPD.

Sewers: The sewers section went very well, minus the cockroaches as Sherry. =/

Factory: This section too was excellent for me. The only noticeable mistakes were bumping into something on the train and reading the text for the control panel.

Lab: This is where the adrenaline starts pumping. The advanced lickers did not do what I had expected them to do. That can be a good or bad thing. In this case, it was both. Only ONE licker in the lab swipes me. However, I was bewildered at this point, because the outcomes were far from what I had anticipated. This made me change my plan, and I force myself to use the first aid spray right after running into a zombie in the MO disc room.

Boss Battles: Both of the Birkin battles went well. They were pretty standard. I had no problem with G-embryo.

All in all, I thought it was a wonderful speedrun for me. I could improve it, but that will have to wait a bit.

The Acid Rounds I pick up at the start are mainly for consistency. I need 9 Acid Rounds by the end of the run. Alternatively, I could have used the Grenade Rounds already in the chamber, but that would have meant using two on the licker in the art storage room and an extra menu trip in the middle of Birkin G5.

Most of my restarts came from the cluster of zombies on the 2F balcony while picking up the Unicorn Medal. After taking the necessary punch from Mr. X to get by him, you only have two bites of leeway before restarting on a third.

My first FAS was used after nearly running out of the room without the Red Jewel. =S

The only real notable case of bad luck in this run was the last cluster of zombies before Birkin G5... I had intended to not take any damage for the rest of the game. Still, since I was so close to the end, I decided to keep it.

This run adhered to my battle plan pretty much perfectly, save for accidentally using one more round against Birkin G3 than I was supposed to. That only cost me a little bit of time doing some extra murking/dodging for the one zombie in the P4 lab I was going to use it on.

I was also forced to do something I didn't expect to do between the time I took down the Super Tyrant and fought Birkin G5: I used the last rocket in my rocket launcher to clear out a bad zombie pattern after opening the gate. I wasn't in the mood to lose my run to a bullshit zombie pattern, and it would've been a waste of time to use that rocket on the final boss, so "hey, let's have some fun!" =p

So ends my onslaught of the US version of Resident Evil 2. I'll come back to it and do a Tofu run later, I think. =D

This mission was a welcome relief after doing the other 4 due to it's short length, 3 minutes compared to 80 minutes.

The trick to this mission is to find the fastest was through each room without taking massive hits. Most rooms are rather easy to dodge through, but there's a few that require a shot or 2 to make through safely, such as the east stairwell on the 1st floor of the Precinct with the 3 dogs - narrow halls suck.

I also found that the Plants don't actually do any damage when they grab you as long as you shake free before they do anything. This gave me an easy way past the 2 in the west hall.

The only real "tough" room is the secretary's office on the 2nd floor, with like 10 zombies inside. There's virtually no point in taking any shots since you'll get hit if you do. Taking a couple hits and knocking them down tends to be the best course of action.

JP version Single-segment S-rank as Leon A in 1:12:53 by Trevor Seguin.

Played with an american PSOne (the smaller, compact model; the same platform Zeno used for his 1:13:18), the original version of Biohazard 2, and "breaker pro," a boot disc to change the region code.

Occasionally through the video the image will brighten or dim itself. this is probably because my capture card, a Lifeview Flyvideo2000, by default is implementing its "white peak" and "color peak" functions, automatically trying to adjust color settings according to the content of the picture, and I can't disable it with the capturing software I use (VirtualVCR).

Huge credit goes to Zeno because I used his videos as a base for my run. here's the page.

I would like to give shoutouts to Zeno, Shin and the other Biohazard players on their site - you guys are all very inspirational and talented gamers.

GameCube version Single-segment A-rank as Claire A in 1:08:46 by 'FierceKyo'.

This speedrun is dedicated to StevenMayte, WeskerChild and all of my viewers on twitch. You know who you are. It is because of you that I am who I am.

I would also like to take the time to congratulate Smallvillecs on holding this WR for so long. For somebody who isn't a speedrunner, you are truly amazing. What you have accomplished in Resident Evil is truly amazing.

My final credits go to JikkaChan. I studied how he manipulated Mr X and incorperated my own twist to make it a bit easier. The dodge is demonstrated in this WR.

Did not think I was going to get this. Ever. But was only playing for an hour and pulled this run out of no-where. The Licker swipe cost me one second but that balanced out with the Mr X Dodge. I was .8 seconds ahead after the Lickers in the spade key door hallway and still managed to pull back another .2 seconds to beat the current WR by over 1 second.

https://www.twitch.tv/uhtrance. --- This is where you can watch me live.