Released in June of 2003, Resident Evil: Dead Aim is the fourth installment of the popular Japanese Resident Evil Survivor franchise, but only the second of the series to make it to the USA. The game plays like a traditional Resident Evil game in third person, however, combat requires you to enter a first person perspective, allowing you to use either a controller or a Guncon to battle enemies. This time around a cruise ship has been overrun with zombies and it's up to Bruce McGivern to figure out what Umbrella is up to now. 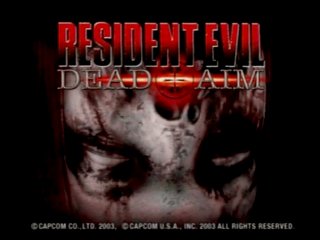 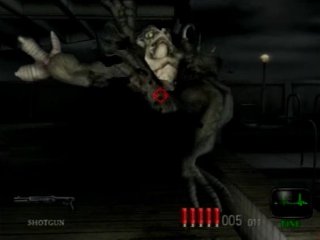 My first speedrun of 2007. Originally I started speedrunning Resident Evil: Dead Aim back in 2003 but never actually went all the way with it. Eventually I had lost interest and since forgotten about it until recently. This run is a Single-Segmented run on normal mode without any special weapons used; the final time was 23 minutes and 43 seconds with no healing items needed.

The biggest pain about this game is controlling the character (I used the controller as opposed to the guncon). It can be very awkward at times and taking sharp turns is impossible. Instead you often have to stop, turn and then continue running in order to save time.

I also want to point out a couple of things about this game:

2) The game automatically heals you after certain points in the game (I believe it's just the 1st and 2nd boss fights that it does this).

I estimate that a "perfect" time in this game would be approximately 23 minutes and 15 seconds. This would require a good amount of luck while mastering some clumsy controls. Not something I plan on trying considering how unpopular this game is. Still it's a great run. If you have questions, comments, suggestions for improvements just e-mail me at 19duke84@gmail.com