Released in November, 2001, Return to Castle Wolfenstein is a first-person shooter and a reboot of one of the granddaddies of the genre - Wolfenstein 3D. Just like the predecessor, it features a lot of Nazis being killed and a lot of technology one might classify as anachronistic. However, the parallels end when you realise RtCW lets you move your head in two dimensions. And also when you notice it actually has a semblance of a plot. 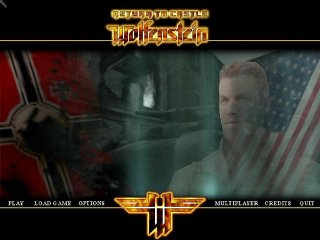 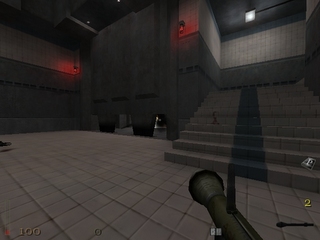 Thanks to KhanFusion who posted the earlier run of 36:58 here on SDA. I used many of his routes where I thought they were optimal. Thanks to pupup0x for originally giving me the idea to attempt this speedrun. He also helped with ideas for routes.

RTCW is based on the id Tech 3 engine and so the movement physics are similar to Quake 3. Features of Quake 3 physics used in this run to move faster include: strafejumping, bunnyhopping, damage knockback, wallstrafing and corner skimming. With RTCW singleplayer physics you can bunnyhop on flat ground, but there's still some delay between consecutive jumps, preventing instantaneous bunnyhop. All settings affecting physics were left at default values (com_maxfps 85, pmove_fixed 0, sv_fps 20, g_synchronousclients 0).

Mission 1 Part 1 (escape1): Kicking opens lightweight doors faster than the 'activate' button would. Could have done more attempts to finish with more ammo, this is quite the minimal you want for the next level.

Mission 1 Part 2 (escape2): I needed good ammo drop from the first 2 enemies here. Ammo gotten from dropped weapons is randomized, it's an amount between 4 and full clip size. This level includes two triggers that are activated only when certain number of enemies are killed. Visiting the radio room in second floor can be skipped if the radio guy shows up on the bridge. I didn't find any reliable way to ensure that happening though, sometimes he won't move at all. I make sure to pick the Mauser rifle at the end.

Mission 1 Part 3 (tram): Tramcar starts moving up only after you hit the switch and visit a trigger at the door. Riding the tramcar is skipped completely. Pressing the first button that activates the tramcar is one of map's objectives, so it can't be skipped. To jump to the ledge from top of the tramcar, you must jump against the moving tramcar. This is another quirk of the physics engine; jumping against moving things can give you vertical speed. I jump twice on the wire to somewhat time the grenade. There's an invisible, angled blockade near the end of the icy wire. I fall to the side before hitting it. Added stamina from the beer is carried over to the next level.

Mission 2 Part 1 (village1): Throwing a grenade at the right place makes Kessler run towards the first waypoint he has to go through, saving about 2 seconds. Kicking adds some damage while I'm shooting the crypt entrance.

Mission 2 Part 2 (crypt1): In this level almost any of the zombies can block you in the hallways. There's two shortcuts used here. First pulling the switch is timed so that a zombie is under the falling gate. This prevents the gate from closing and allows me to backtrack, skipping a part of the map. More of the map is skipped with a grenadejump. There's an invisible wall in the middle section of the bridge, preventing me from just jumping there. At the very end, hitting the switch past the zombie is quite tricky but saves a bit of time.

Mission 2 Part 3 (crypt2): A zombie knight blocks me in one of the trap rooms but I don't think I lost any time there.

Mission 2 Part 4 (church): Map objectives include killing all the elite guards. In the altar room the 4 elite guards are spawned at random spawnpoints. Making noise with the rifle usually makes some of them come out of their hiding spots. The last room is also very random and deadly. Rest of the enemies in the hallways are very predictable. Some sloppiness in this level overall, could be done few seconds faster.

Mission 2 Part 4 (boss1): All zombies and the boss need to be killed in order to finish this level. Killing the boss makes all of the zombies unborrow immediately, so dynamites from the village level are used to kill it as fast as possible. Killing the zombies fast is really just luck. In theory each grenade could kill 2 zombies.

Mission 3 Part 1 (forest): In this level you need to wait for the truck to reach it's destination to finish. Hitting a trigger in the tunnel makes the truck skip some waypoints and go in a straight line to the end of that tunnel (through the mountain). Though in order to get to that trigger fast, I need to rely on one of the tower guards falling down. This happened only rarely and I'm not sure what triggered it.

Mission 3 Part 2 (rocket): In the storage room I get stuck against the shelf, losing at least a second. Chair shortcut saves couple of seconds at the end.

Mission 3 Part 3 (baseout): Main difficulty in this level is not taking too much damage. I get very lucky with the army of nazis there.

Misson 3 Part 4 (assault): Mauser shot in the gate guard's hearing range makes him fall down. I then use him to get on top of the ladder and send him falling down again, ouch. Arming the grenade earlier would make him retreat down the ladder. The second grenade trick is mostly show-off, there's a safe way of going down which is as fast. This grenade should have been used for speed boost elsewhere.

Mission 4 Part 1 (sfm): Need to get at least 2 ammo from the panzerfaust drop (can get 1, 2 or 3). There's a trigger I rush into after saving the scientists. It makes the tank start moving a little earlier.

Mission 4 Part 2 (factory): Trickjump skips most of the map.

Mission 4 Part 3 (trainyard): Another chair trick, doesn't save that much time though.

Mission 5 Part 1 (norway): Hitting the dock platform just right lets me keep jumping speed further. The edge of the platform must be hit after the apex of the jump. This way, enough time has passed since last jump and you can bunnyhop again. Later, grenade is used to slow down a fall. Button which opens the gate can be activated through the window. Leaning right can help a bit here.

Mission 5 Part 3 (boss2): Grenadejump takes me to the platform above the Uber Soldat. This allows faster way to end the level. Also, the boss only uses his weakest weapon when you're there.

Mission 6 Part 1 (dam): Trickjump skips the slow elevator part. In the beginning of this level you're given the tesla gun with 50 ammo, even if you didn't pick it up in the previous boss fight. Tesla gun knocks the player back a little when fired. I use this to move faster in the air shafts.

Mission 6 Part 2 (village2): Here I use a non-intended route that includes another chair shortcut. There's not many guards capable of sounding an alarm during a fast playthrough of the level. I spawnkill one of these guards with a grenade. Then I backtrack a little to hit a trigger that will spawn an officer I need to kill. Shooting the mauser rifle makes him come outside. It seems this route is not faster nor slower than the one used by KhanFusion.

Mission 6 Part 3 (chateau): In the room with 2 guards under the barrels you could go through unnoticed but triggering an alarm is not a bad thing because it can draw later enemies closer. One elite guard must be killed for the door upstairs to open. I also kill a guy with the venom gun to collect ammo for the next level. I wanted at least 200 ammo from the drop, but here I got more than enough. At the end there's a trigger that needs to be visited.

Mission 6 Part 4 (dark): Another use for the tesla gun here. While I jump backwards it gives me some additional speed to get up that cliff, skipping the intended route around. The second Uber Soldier doesn't return much fire because he's in middle of a scripted event.

Mission 7 Part 1 (dig): Straightforward jump level where I get stuck a few times.

Mission 7 Part 2 (castle): Unlike previously, the zombies here are invulnerable while unburrowing. Dynamite kills them as soon as possible. Near the end it would be possible to grenadejump across the balconies, but you would have to kill a FG42 trooper before arming the grenade. In the end, it wouldn't save too much time.