Released in 1989, during the Genesis's first year, Revenge of Shinobi deviates from the first Shinobi by giving you a life bar and not forcing you to collect hostages. The crime syndicate Neo Zeed has murdered Joe Musashi's master and kidnapped his bride, Naoko. Joe sets out to rescue Naoko from the clutches of movie and comic book knockoffs. 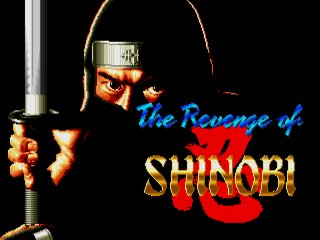 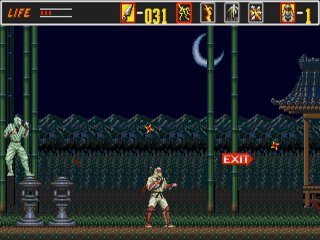 -Goal: Complete the game while taking no damage
-Single-segment
-No deaths
-No damage taken
-Played at Hardest difficulty setting
-No programming errors abused (again, don't know any)
-A Genesis model 2 + VCR was used to record the run, thanks go to Nate for capturing the run.
-No, I didn't use the unlimited shurikens cheat. If you know the game well enough it isn't necessary.

This was actually a run I was working on before I did my Zero runs, but those evil Zero games sidetracked me. I decided to come back to this game after I ran Zero 1 and 2.

I would like to thank Nash, the guy who created the map of 8-2. If he didn't make that map I would have gone crazy trying to figure the stage out.

Unlike my Shinobi III run this run is actually no damage! Here are the reasons why I attempt no damage in Revenge of Shinobi:

1. When you take damage you lose your POW item, cutting your damage by two-thirds.

2. You get catapulted about 20 feet when you take damage, and fall into bottomless pits half the time.

3. If you don't fall off, you lose your ability to block and then you get clusterfucked by all the enemies.

4. It's badass when you take no damage.

Yes, this means I should improve my Shinobi III run so I don't take any damage. Especially since Shinobi III is easier.

There are times when I bump into enemies (most notably 1-1, 4-1, and 7-2). This does not count as damage. Only when enemies are attacking you or if you bump into a boss you will take damage.

This is a difficult game, but I think I did a good job of optimizing movement in this game. The mistakes made were minimal and less than five seconds, which is good for a run that is barely over 15 minutes. Enjoy the shameless comic book/movie imitations.

Ninjitsu used: None, I don't need Ikazuchi for invincibility and there is no height gain needed from Fushin.

1-1: This is one of my worse runthroughs of this area. I accepted it anyways because this is a very annoying area to runthrough. If you want to know, it is possible to run through the final section without bumping into enemies while keeping forward movement.

1-2: Good runthrough of this stage. No flaws worth mentioning.

1-Boss: It is worth mentioning that this boss can be killed faster by hitting him before he has the chance to slash, but it's too unreliable and my strategy is reliable.

2-1: Good runthrough, some of the jumping was probably suboptimal, but it was the first day I was using Fushin in this stage =P

2-2: There is only one minor flaw in this stage and you probably won't notice (hint: it's in the very beginning).

Ninjitsu used: Ikazuchi, it allows me to kill the boss in two repetitions instead of three.

3-1: The pause about halfway through the stage is necessary. If I double jumped right away I would have been hit by the bullets sailing across the top of the screen.

3-2: Nothing wrong here, I might have done a few things a little slowly, but it doesn't matter because I would still have to wait for the elevators anyways. It is probably faster to fall down and jump on top of the final elevator rather than wait like I did.

3-Boss: Only a slight mistake here (missed shuriken). I have no idea why my sword swings when I'm not even close to the boss.

Ninjitsu used: Fushin, it allows for a HUGE shortcut through 4-2

4-1: I don't make any obvious mistakes here. It is possible to make the jump towards the end without getting stuck behind the car, but it's really hard to do.

4-2: Fushing shortcut makes this stage nice and fast. Try this shortcut yourself, it require good timing and lots of precision to pull off.

4-Boss: I got good luck here (Boss can either throw engines or cars, engines are good), and I kill him before he throws the engine.

Ninjitsu used: Fushin, allows for a huge shortcut in 5-1

5-1: Went great, I pause while that ninja is throwing stars because there is a chance I might get hit if I simply jumped right away.

5-2: This stage went well, there is only one incredibly stupid error and it is due to bad planning not bad play. I take a detour to collect a 20 pack of shurikens, but I use two shuriken bursts while collecting the 20 pack, resulting in a meager four shuriken gain. I didn't think of how stupid it was until after the run.

Stage 5: No complaints here, I killed the final section of the boss in two repetitions.

Ninjitsu used: Ikazuchi, allows me to walk past the inconveniently placed enemies in 6-1.

6-1: I pick up a hidden 50 pack of shurikens without wasting any time, thus solving any shuriken troubles towards the end.

6-2: The only thing I regret here is my mindless flinging of shurikens strategy towards the end of the level. I'm sure well placed shuriken bursts would have taken care of the ninjas without wasting any time.

6-Boss: There is an error due to the method I used and due to bad luck. The error in method was going to the right when Bat-thingy (a crudely changed Batman sprite) came out. I should have walked to the left because that destroys at least two bats that spawn when Bat-thingy comes out. The bad luck was due to a bat getting in the way of one of my shurikens.

Ninjitsu used: Ikazuchi, lets me walk past the numerous bullets in 7-2 without getting scratched.

7-1: Flawless, you might think walking back for that big jump towards the end was a mistake, but I would rather sacrifice a second and safely make the jump than fail miserably. Try the jump yourself, it is incredibly difficult.

7-2: I made a really dumb mistake here. I simply forgot to shoot the soldier RIGHT IN FRONT OF MY FACE with a shuriken. The mistake further threw me off when I managed to miss a platform right afterwards. There's a third minor mistake while I'm falling down, but I doubt you will notice.

Ninjitsu used: Ikazuchi, allows me to walk through the multitude of attacks in 8-1.

8-2: A.K.A the hell maze. Tons of different doors you can take and only one order is correct. Fortunately, I have a good memory so that isn't a problem here. The only mistake I can think of making was in the third to last room with all the rifle soldiers. I should have stood up in between columns to make movement slightly faster. The enemy-packed room before the boss was NOT a mistake. I don't know of a way to go through that area constantly going left without getting hit. Since it was the final room in the game, I decided sacrificing some time to ensure the run was successful was a good idea.

8-Boss: I actually made a mistake in method here, but you probably won't notice it. I'm sure there is a faster way to kill the boss, but I'm not sure how to make a faster method that is also reliable.

Is there room for improvement in this run? Definitely, but I think it's a great run regardless, and I think anyone who knows how hard this game is will appreciate the run.