Released in May of 2003, Rise of Nations mixes turn-based elements into a real-time strategy game. The development was led by Brian Reynolds, one of the designers behind turn-based strategy games Civilization II and Sid Meier's Alpha Centauri. Play as one of 18 different civilizations throughout 8 ages of history, and even try to take over the entire world in the attached single-player campaign. 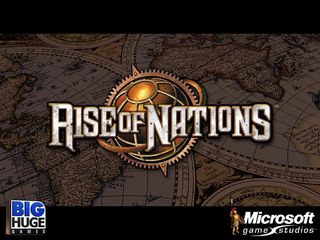 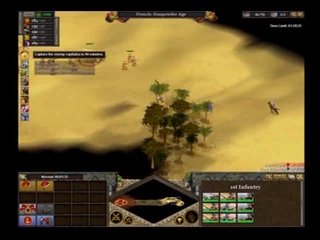 I spent plenty of time with my Mega Man X Command Mission comments, so I'll be a bit more brief about this game. But only a bit - I do believe, after all, that this is the first full-game single-segment RTS run on SDA.

I reacquired this game for $10 not too long ago, having played it quite a bit in my freshman year of college. Back then I never had any thoughts of even playing the Conquer the World mode, much less speedrunning it. But when I got the game again, I played through the Conquer the World scenario and determined that it was, in fact, speedrunnable. Not only that, it was doable in a single segment and could easily be tracked separately as such, unlike so many other RTSes, which can be separated well into individual levels and thus would be a bit tougher to prove single-segment runs for. (Warcraft 3 is kind of like this too - though I'd love to see anyone TRY single-segment with that.)

When I determined the fastest strategy for winning battles (on a whim), I admit I was.... rather scared. I did not expect the tiny starting force to be good enough to take a city, let alone force a map victory. However, this level of rushing tactic (the way I remember most RTSes, you don't get military units right at the start) is apparently not new to the RTS world; when I brought it up on the forums, Pendrokar relayed his story about rushing tactics in Emperor: Battle For Dune, which calmed me down a bit.

Let's put it simply - I'm an RTS noob (spelling intentional) and (if you couldn't already guess by now) I know it. So my strategies are likely far from optimally done and could be a target for future improvement. (Hell, I probably improved my RTSing ability by 300% just doing this run.) However, knowledge of hotkeys and perfect placement everywhere is much less important in this run than in runs of most RTSes, at least on Easiest difficulty, and if you watch just a couple of battles it'll be clear why. Also, these comments were written about a week after the run, so there's some regrets I have now upon watching it again. However, the insane luck I got makes me not want to attempt this again just yet.

If the video looks hard to watch, that may be because instead of using FRAPS like every other PC game speedrunner, I use a DVD recorder. Unfortunately, due to hardware and money limitations, I was forced to use composite as my transfer medium. Because of this, it'll be easier to follow the run if you use the higher-quality versions, even though Nate (who's got his stuff set up to eke out just about every drop of quality in the lesser versions) did the encoding on this one.

Mike has his IFAQ, Enhasa had his AAQ, so let me quickly address a few LAQ (Likely Asked Questions) regarding this run:

Q: Why the French? Their military is only good at surrendering.
A: Silence your tongue, heathen! The French are among the best-suited nations for a fast Conquer the World run for a few reasons:

I don't put the 'leadership' benefit they get (one free General upon finishing each Fort) to use because Forts take forever to build. It's a shame because leadership is what the French always had. Do a search on Charlemagne, Joan of Arc, or Napoleon to see what I mean.

There is the slight possibility that another nation might be better, but the only one I can see as better would be the Germans, due to their better Heavy Infantry in early ages and general resource-gathering benefits (they can get Granaries, Lumber Mills, and Smelters - the buildings that amplify the gather rate of gathering buildings within a city - sooner than usual; Refineries don't matter in a speedrun), plus having a similar map position to what the French have.

Q: Why no random placement of anything? That could certainly yield a faster time.
A: Four reasons:

Q: Wait, 'enough' luck? What kind of luck do you have to get?
A: I was hoping you didn't have to get me started on this. But in the interests of completeness I'll mention some things that needed to go my way:

While my luck in this run was not perfect, the vast majority of this stuff lined up, and the times it didn't line up, I was able to use other luck to work around it.

To answer the rest of my LAQ, I'll give some insight into my strategy and planning.

The strategies of this run were mostly the product of my own research. I do have to give credit to the people who posted in the game's topic, however - I may not have pressed on without them.

I may be tempted to try this run category again if I'm not beaten to it by the time I get a new TV (ideally, a TV with which I can use HDMI and component cables to really improve the visual quality), which would not be until September at earliest. Matching my own luck here (the part of running this game that I actually dread - simply put, this run took more resets than just about anything I'd ever done, all because of luck), and by enhancing my strategies and RTSing capability, sub-40 is a realistic goal. I doubt I'll switch from the French though - I'll just reapply my strategies using what I learned here, and maybe my artillery will actually be some use next time.