River City Ransom is a NES game that has picked up a lot of momentum many years after its release. This is likely due to little kids' brains not being able to comprehend the significance of BARF! Adults however can appreciate the offbeat humor, solid beat 'em up action, and RPG elements. Alex and Ryan are out to rescue Cyndi from Slick, all while battling gangs such as The Generic Dudes. Showcasing Technos at its finest, River City Ransom is the third game in the Kunio-kun series and undoubtedly the most famous. 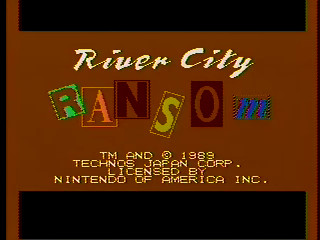 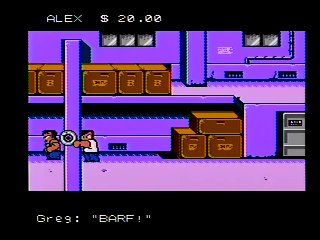 River City Ransom is basically one big boss rush.  There are 12 bosses in this game; 9 mandatory, 3 skippable.  In fact, with this optimized route, EVERYTHING not related to mandatory bosses is skipped entirely.  You don't farm any gang members unless they are mandatory to trigger a boss spawn.  The 9 mandatory bosses have a required order, with the coin spawn of a dying boss serving as the trigger to spawn the next boss.

As the boss order is static, there were limited opportunities to optimize this run compared to previous strategies implemented by Feasel and Darkwing Duck.  The first deviation from previous strats occurs at the Warehouse exterior.  Instead of trying to farm gang members for a fast weapon like a chain or a pipe, Ryan scoops up the crate (which is always there if Ryan is unarmed) and jukes past the gang to the Warehouse entrance.

The warehouse is the primary reset point of the run.  Optimally, you want The Home Boys gang in here, but more specifically, you want both Home Boys on the bottom floor of the left side of the Warehouse center wall.  By positioning Ryan against the center wall and facing him away from the gang members, you can manipulate them into passively walking into the center wall toward you.  It is worth noting that The Home Boys are the only gang that can be manipulated in this way.  The crate reaches through the wall, so you turn and swing the crate to kill them, with your fingers crossed they both require the same number of hits.  It's either 2 or 3 hits, and varies by gang member.  We're lucky here; they both took 3.  This double kill is essential.  Gang members will spawn based upon your positioning, and they spawn immediately upon coin despawn.  If two coins despawn simultaneously, then wherever the next gang members spawn, they will be overlapping each other in the exact same spot.

After the double kill, you have 6 seconds before the two coins despawn and the other 2 Home Boys spawn.  You can use this time for a couple of things.  First, you want Ryan to damage himself once with the crate.  At full health, you need at least 2 actions that self-inflict damage to die, so you can do one now while you wait.  Second, you want to position yourself in an optimal spot to trigger the other 2 Home Boys spawns in a good location along the way to Rocko.  When you stand on the front edge of the top box to the right of the center wall, the other 2 Home Boys will commonly spawn in the top left corner, and rarely spawn in on the low box to the left of the center wall (optimal).  Luckily, the optimal spawn is achieved, which goes about 2-3 seconds faster than the top left corner position.

The Rocko fight with the crate is an invention of fellow River City Ransom speedrunner Niss3.  It has gone through a couple of iterations, but this is the fastest way I've ever seen, so credit goes to him for this technique.  As soon as Rocko falls, the second action to self-inflict damage occurs to finish the death abuse.  Previously, Niss3 and I had thrown the crate at the wall again, similar to the first action, but making sure that the crate bounces in such a way that you can take two hits.  The kick technique that I figured out is about 1 second faster while still managing two hits.  If you overlap your sprite and the crate sprite enough, you can essentially kick the crate into yourself.  Then you run into the wall just as Rocko's coin spawns, which is important because you need the coin to spawn to trigger Blade's spawn and you NEED that coin.  If you time it right, you collect the coin just as you hit the ground and die.

This is the only non-linear moment in the route.  You have to backtrack from the Warehouse all the way to Sherman Park to fight Blade.  The death abuse warps Ryan back to Waterfront Mall, skipping 5 screens of backtracking in exchange for half of my money (which is the penalty for dying), instead of keeping your money and running back through 7 screens, which was the previous strategy.

The tradeoff here is the previous strategy finished farming money and now has Stone Hands, whereas you are way ahead, but have $12.25 and no weapon.

Thanks again to Niss3 for the Blade fight strategy.  Blade always has a chain, which is the best weapon due its combination of speed, range, and damage.  The opening round gives you a chance to safely pick up Blade's chain after disarming him and go on the offensive to take him out.  You can do this fight about 1 second faster than I did here.  If you hit Blade with the chain on the same frame he lands from jumping out of your hands, he will hop up immediately instead of waiting 2 seconds to get up from that particular knockdown.  This is very hard to pull off, and can mess with your chain timing, so I did not try it.

The "run to Turk" is the second biggest reset point of the run.  Ideally, you can navigate through 9 screens without getting hit.  Taking damage is more detrimental for the new strats because it also makes you drop your chain, which can take an additional second or two to recover.  The next two rooms are Turk's room and Mojo's room.  Each room requires you to kill 4 gang members to spawn each boss.  This is also where you lose a little time compared to the previous strats.  It's a bit slower to kill gang members with the chain than with Stone Hands.  The boss fights are also a little bit slower with the chain.  Niss3 and I both figured out that you can defeat Turk in 4 rounds with a little hesitation in the first round of the fight, which saves a couple of seconds.

After Turk and Mojo are down, you arrive at the Flatirons Mall.  If you've gotten the right combination of gang spawns, you'll have enough money for Stone Hands.  This attempt was on the brink of failure.  If the Mojo room gang spawn had been The Home Boys, the money would have worked out to $26.75 after Mojo, which is twenty cents short of the $26.95 needed for Stone Hands.  This, and other combinations like it, happen a lot.  Typically, if either Turk's room or Mojo's room has a Generic Dudes, Frat Guys, or Jocks spawn pattern, it's an automatic reset.

From here, everything is pretty straightforward.  Execution with Stone Hands was pretty clean.  Gang members this late in the game are really fast and aggressive.  The one advantageous spawn was The Internationals spawn at the River City High School exterior with a tire on screen.  The Internationals have a very high weapon priority.  They will run right past you without sparing a thought for attacking or blocking in favor of grabbing that tire.  So you can be very aggressive with them because you know they aren't going to attack or block.  It's a very useful tactic.

In the gymnasium, I saved a little bit of time by not collecting the 3rd gang member's coin.  I knew it would despawn before I got to Otis, so I just took off without it.  You hear the music change from standard enemy battle to boss battle about 1 second before I punch Otis.

One more Niss3 strat to shoutout!  The Gymnasium jump after Otis is faster than the most recent TAS recording.  After killing Otis, run to the back and high jump onto the bleachers.  Now, hit the second directional input for the dash input and the buttons for the jump input on the same frame, and the game will propel you up to the top level without needing the basketball hoops at all.  It seems the game preserves your run speed until you walk (holding a direction) or run again, so a frame perfect jump input tricks the game into thinking you're still at max run speed.

I'm really getting nervous on the top floor.  Despite 5 errant punches, the gang members still go down relatively smoothly.  Then it's off to the races to the Twins fight.  The last piece of RNG works in my favor as the doors open right away.  Sometimes, the doors just don't open fast enough and your first punch at the Twins whiffs, and you lose 2 seconds.

My twins fight was a full round faster (7.5 rounds) than the previous run (8.5 rounds).  No real strat difference; just tighter execution and landing more punches on both twins.  This saved about 2 seconds.

Both my run and the previous run have a 10-round Simon.  It's possible to get a 9-round Simon fight, but I think I was one punch short.  Of the 27 punches you throw in 9 rounds, I think you need to land 26 of them to achieve a 9-rounder, and I think I landed 25.

I'm really thrilled with how this run turned out.  I had been grinding for sub-6:40 for about 6 weeks (after spending the majority of 2016 running this game as my primary speedrun).  I like arbitrary goals, and this run accomplished three:
- Sub-6:40
- Brought down the WR by over 1 full minute since I started speedrunning (WR was 7:39 when I started)
- Beat the game in under 400 seconds (398!)