It's the year 1990 and Ocean has just released the second installment in... wait, it's the year 2034 and crime runs wild in the fearful streets of Detroit. The police force is stymied and contracts Omni Consumer Products to draft the solution. That solution... is ROBOCOP. He's a revived police officer with cybernetic enhancements knowing no remorse and showing no emotion when skimming the scum off the corrupt society one rogue element at a time. In the game, you not only do that, but also have to locate and destroy a large portion of all the "nukes" (a synthetic drug) in each stage. 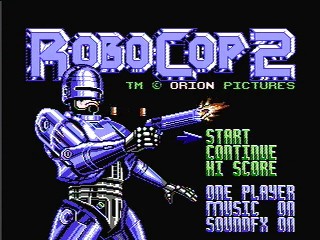 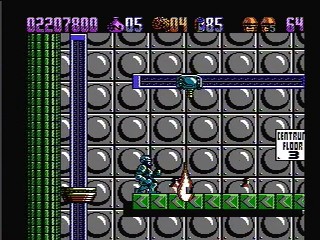 So I really have no history with this game before I started running it. I was looking for a new NES game to run and this was one of the few I was interested in that no one has tried running, as far as I could tell. There was a TAS from years ago and one other run, which may or may not also be a TAS, and that was it on this game. For the route I use I took pieces from each of the other two runs and a bit of my own discoveries to make it.

Some of the keys to going fast in this game include
- Avoiding enemies, shooting/fighting slows you down so it's best to jump over the ones you can
- Keep your momentum going, RoboCop is very slow to get moving from a standstill if you stop
- You only need to arrest 60% of the criminals and destroy 60% of the nukes in each level to finish it, so the fastest route arrests and destroys the minimum of each while going as fast as possible. Not getting 60% in either one takes you to a shooting gallery mini game, which is a reset
- Mashing start speeds up the tally after each level
- For some reason pausing at certain points during the Heisenberg fight can randomly speed up the rate he fires his predetermined shots. No idea why or how this works to get the fastest cycle
- Hit boxes are weird so you can clip through the top of certain enemies without it slowing you down, probably used most on the first level

Now for how the run went

Level 2 - Got good luck with the first electricity, solid rest of the stage and I then wussed out on the final electricity, probably lost a second or two.

Level 3 - I hesitated a little bit around both of the gear sections, which are instakills, but I ended up needing to wait for the electricity anyway, so I don't think it lost any time. Good rest of the stage with some solid, risky jumps though the electricity at the end.

Level 4 - This level has probably the hardest section in the game, getting down to the secret area. If you are jumping over a pit and you get shot you lose all momentum and fall straight down, there are 4 possibly guys that can shoot you in that section and they appear to be random when they pop out and shoot. I have never been shot over a pit an recovered before, no idea how I survived that. Probably lost a couple of seconds from getting shot twice.

Level 5 - Near perfect stage, had a scary moment with a near jelly bean hit towards the end but was able to duck under it.

Level 6 - Another very good stage, not much to improve here.

Level 7 - Solid stage, had to wait for a random jelly bean to go by but good besides that, this stage is hard to go faster on.

Heisenberg - Managed to get a decently fast cycle even though I had to pause twice.

Level 8 - Hit the (frame perfect?) jump to grab the weapon at the beginning, smooth sailing after that. I feel like a run has a 50% chance of finishing if I get past this level.

Level 9 - Pretty good stage, I mistakenly jump off the platform at the very end, nearly getting shot by the cannon but luckily I jumped early enough.

Level 10 - Hit the nice missile jump and make it through the stage with only a very minor mistake or 2, no real time loss. This stage is the first of two stages that have platforms that reverse the controls. So as soon as you land on the green platforms you have to start pressing left to keep going right and the controls don't return to normal until you land on regular ground, it's very annoying, especially at the end of a run.

Level 11 - Good stage, I hit the second hardest trick in the game, the missile jump at the beginning, if you miss it and get hit by the missile it will carry you all the way to the end of the stage and kill you, wasting a whole lot of time. Made it through the reverse platforms for a solid stage.

Level 12 - Had a few minor slow downs but still a pretty fast stage, I was quite nervous at this point and just wanted to finish the run. In the Twitch recording you can hear me telling myself to clutch it out, haha.

Final Boss - I hate this boss, it's such a terrible final boss. Nothing like 2 straight minutes of mashing to finish off a run. The first form can be shot anywhere, second for can only be shot in the legs, and third form can only be shot above the legs. I was actually more aggressive than I usually am and finished him off with a gold split. My forearm was burning after this one, ha.

Overall it was a really good run, no major mistakes just small ones that cost a second here and there. I timed the run at 11:57, sub 12 was my goal, which crushes my old PB, that old run and the TAS. Just like Hudson Hawk was, this game is also quite a brutal run. Almost every enemy and background object in the factory stages kill you in one hit if you touch them, the gears, the red jelly beans, etc. So that leads to a very tense run, since so many things can end it with one little mistake. A perfect run could probably go 10-15 seconds lower, but that would require perfect luck with the enemies, electricity, jelly beans, etc, along with perfect execution of RoboCop's terrible controls. There is also a zip in one of the final levels that I accidentally hit during practice only once, no idea how to replicate it since I was unfortunately not recording. I would love to see a new TAS of this to push the game to it's limit. I am very happy I don't have to play this game any more and I hope you enjoyed the run. Thanks for watching.