Color Dreams, who were fully aware their games were mediocre at best and could never be licenced with Nintendo, independently put out things like the 1989 NES Robodemons. It's a platformer with autoscrolling shmup segments. You shoot a boomerang at robots infused with demonic souls. The game had one track of music but actually came with a few digitized voiceovers to fill up the space. 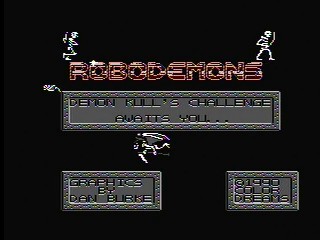 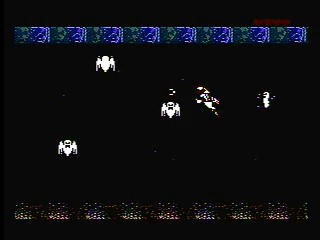 Robodemons. I think this is an example of me running a game because it was there and I could. What is probably even more terrifying is that I actually went and spent the money for an actual cart of this to run the game. If you have not seen this game, yet, then you'll understand shortly. You might also understand if I mention that this game is by Color Dreams.

This game is...well, not good. I knew that from the start, so I knew well what I was getting into. The movement is slippery, you can only have one projectile on the screen at the time, jump/attack is reversed from what one typically would expect in a NES game, damage is a bit odd, and you can have more health than your indicator can show.

If you zoned out during that last paragraph, you didn't really miss anything important. All you need to know is that it's a Color Dreams game.

Anyway, on to the run itself with our hero "A Most Great Warrior" (Yes, that's what he's called) who is so tough he only wields a boomerang (As you'll soon see I'm not making this up...).

Entering Hell
- So yeah, uh, we're going to hell, which is a pretty appropriate start for this game. This first stage is a short auto-scroller where you have to kill Death. Not much to say here, really.

The Level of Bone
- Platforming time! I got hit by a few extra shots than intended in this stage, one at the beginning, one by the key, but they didn't cost time. The first one was actually faster than my original plan because I usually would stop to avoid the hit. The second one was preventable, but didn't really matter all the same. I stopped briefly at one of the hot spots on the ground toward the end because it's instant death and the game almost always drops my jump input there when I don't stop.

The Level of Flesh
- We start off in an autoscroller. I collect lots of health here because I'm going to be doing a ton of damage taking later rather than bothering with killing anything. I make my way all the way over to the right edge of the screen toward the end of the section to speed up the exit when the section ends.

- The next part of the stage...well, RIP your eyes. I had no idea what in the world was a platform and what wasn't when I first entered this stage and falling into the liquid (it looks like lava, but I'm pretty sure it's not) is instant death. This stage went really well and I was able to make an air-jump when exiting one of the doors to save some time. Also, if you're wondering why I didn't just walk off the platform to save the key, it's because I can't. You can't control how far forward you move when you walk off a ledge. When you walk off that ledge you move forward just enough to fall right over the key and into the instant death liquid.

The Level of Fire
- Another autoscroller to start. I messed this one up toward the end because I forgot when it ended and I wanted to make sure I was all the way to the right. I took a lot of extra damage, which didn't end up mattering, but it doesn't look very good.

- You may notice that I was able to walk right on to the first two green platforms, but waited for the third. Although it looks like you could just walk right on to the third, trust me, you can't. You just barely miss it and fall. So I have to wait for it to come back. Close call at the end with the last green platform. I have to fire a shot to freeze it long enough for me to get over to it and jump on it and I just barely made it onto that platform. Unfortunately, the platform was in just the right position on the way back that I got stuck on it briefly while trying to get to the exit.

The Level of Lost Souls
- Another autoscroller. I avoided getting any health here because I need to death warp in the platforming area. It went pretty smoothly.

- You have to rescue the "Lost Souls" here to move on. I start up on the top area and just plow through everything. After I rescue the two souls in the room, I death warp. The second pass through the starting room for the last souls didn't quite go so well, though. I missed a soul and messed up a dodge on probably the worst enemy to miss a dodge on because he saps your health at a very fast rate. Fortunately I didn't miss anything else because that would have been the end.

The Level of Demons
- As usual we start with an autoscroller. I intentionally took a death here because I didn't have enough health. The second go didn't go the way I would have liked. I would have liked to have had more health, but I kept getting shot.

- This stage is awful. I had a slow start with the jumping red demons, but I figured things out as I went along. Later on I noticed I had enough health to just plow through the jumping red demons, so I did. The guys with the black helmets I had no intention of plowing through because of prior experience in the run and knowing the damage they could do, so I stopped to kill them. I death warp after grabbing the key and then make my way to the exit.

The Demon Factory
- Yay autoscroller! One enemy, one boss. This boss fight could not have gone better. It is very tricky due to his movement, but I nailed it this time.

- You have to kill the orange robots and some orange battery looking things to advance here. I mistimed a few boomerang tosses and dodges, but otherwise this went decently.

King Kull's Chamber
- Oh hey, it's an autoscroller. These things are hard to hit and hard to dodge. I took two hits here, which wasn't good. I need as much health as I can get for the next part.

- Despite my health being lower than I wanted it to be, I decided to go for it. Pretty much this just involves taking the damage through all four enemy rooms along the way to the boss. I missed the third door the first try, but thankfully recovered and got in quickly. It was a good thing, too, because the hit I took in the next room brought me down to my last hit.

King Kull
- Yeah, this is a boss. I had to play it a little safer than I would have liked here. The only real threat are the "bats". Setting up in the corner is the perfect position. As long as you watch your boomerang timing, you're good. You can hit the bats before they hit you and kill the right dragon head. Once the dragon head is killed, the boomerangs will always hit Kull's head on the return.

"And thus the demon Kull was destroyed and his condemned souls were freed from hell."

Conclusion
- Is there improvement here? Of course, but I'm not sure if I want to do it! Some points that can certainly be improved are not taking a second intentional death and some points of execution in the Level of Demons and the Demon Factory. There may also be a quicker way to kill Kull, although as of when these comments were written I hadn't found one that I had made work for me.

Aside from those points, a lot of things went well in this run. The Level of Flesh and the fight against the mech-dragon went exceptionally well.

Thanks
- Karma, for his usual support and who was one of the few who actually enjoyed watching my attempts of this game!

- Everyone else who watched my attempts, has watched this run, and will watch this run because I could barely watch this run to write these comments and I'm the runner!

You all deserve some sort of reward or achievement for that!