Robo Warrior is an action-puzzle game released in 1988 for the Nintendo Entertainment System. It takes place on an alien planet named Altile. We follow the adventures of the cyborg ZED ("Z-type Earth Defense") as he attempts to defend the planet against the evil Xantho Empire. He must collect many items and weapons hidden on Altile to fight the Xantho Empire and destroy its leader, Xur. Only by using his bombs to clear a path deeper into Altile, collecting items, and killing enemies can ZED save the world. 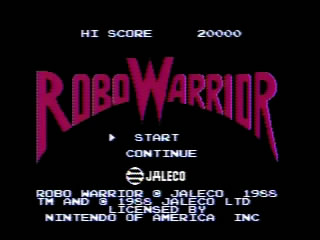 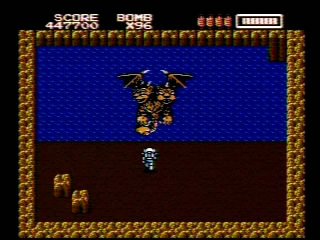 Welcome to my Robo Warrior Speed Run. The cyborg ZED has to defeat the evil Xantho Empire, which has taken over the planet Altile. Can he do it in record time?

This game can be broken down into two distinct parts: accumulating items and weapons and then burning through said items and weapons to destroy everything in ZED's path. This is not easily accomplished, however, since most item placements are random throughout the game and can vary drastically from game to game. The most important items/weapons to pick up are:

Candle: allows ZED to see in the underground passages, where many items can be found
Energy Capsule: restores ZED's life
Super Boots: increases walking speed temporarily
Missile: clears a row of obstacles on a straight line, very effective against bosses
Flash: kills all enemies on the screen, except bosses (although it does damage bosses)
Life Vest: allows ZED to walk on water without drowning
Lamp: lights up dark underground areas permanently, good for entire periods of darkness
Megaton Bomb: instantly destroys everything on the screen (enemies and breakable blocks)
Bee: randomly adds one item to your inventory (except Life Vests, Lamps, and Megaton Bombs)

Some items are picked up even if they aren't used. In the underground passages, due to the limited area that can be seen with a candle, picking up items that will never be used cannot be avoided.

All levels require a "Key" to open the door at the end of the level. The Key is not always positioned advantageously. Some levels also have a "Chalice" item, without it, the level loops endlessly on itself and ZED cannot complete the level.

Finally, the two best areas to obtain the best weapons and large quantities of weapons are the Rooms of Idols and Wells of Hope. Rooms of Idols can be found by blowing up blocks at the top of a level and accessing an area where, if the statues inside are bombed in a specific order, great weapons and items can be found. Wells of Hope are watery areas that, when accessed, kill all enemies on the screen and double all bombs and items in ZED's inventory (except Life Vests, Lamps, and Megaton Bombs). Sadly, these special areas can not be abused by using them over and over in a given period (if they are in a period that loops on itself unless a Chalice is collected).

Here I took some time to start stockpiling items. It was somewhat unfortunate that the first Well of Hope was so early in the game, but it was nice to get my bomb supply up to the maximum of 99 quickly. I tried to enter as many underground passages as I could early on, since the darkness has a treasure trove of items. Later on, I demonstrated the usefulness of the Missiles. Missiles quickly clear a path through breakable barriers (especially if I have Boots active) and they also kill bosses very quickly. However, they also must be conserved, since running out of them near the end of the game is not good for ZED. I was pleasantly surprised at how many I found in just this first stage. I have no idea why I didn't use the Boots right away when I found them halfway through the level, but I was very pleased at the number of Missiles I found at this early stage of the game.

This is the first level with water hazards. ZED drowns quickly in water, but Life Vests allow him to walk on water. However, if the water is narrow, ZED can make it across without using a Life Vest. I fumbled around a bit in the last underground passage looking for the exit, it looks ugly. Still amazing luck on finding items so far.

The Lamp I grabbed in the previous Room of Idols was immediately put to use here in this extremely dark level. Again, wow at the number of Missile pickups.

No real comment here, just Missile'd away at the long line of blocks and ran through quickly.

This is one of the wide open levels, so I just put on the Boots and ran. Due to my insanely high Missile level, I came to the decision to skip all further optional underground visits, the earliest time in any run I have been able to make that decision. Also, in case you are wondering how powerful the Megaton Bomb is, look no further. I collected ten of them overall, and a judicious use of them to clear the entire screen at once saved time, bombs, and missiles. I used two here to grab a bunch of items all at once.

This boss, surprisingly, was the hardest, since I am still in item conservation mode. Luckily, it is slow enough that bombs can be used to kill it efficiently, and fortunately, not too many bombs are needed.

Finally, the second Well of Hope. I was rocking out with items now, both useful and not.

Another dark level, and a much longer one than the previous one. Also, since I cannot get to the Chalice without the level starting over again, I must run through this level twice.

The level is one screen long, and not too difficult, either, especially after a Megaton Bomb blew up the entire period all at once.

This was a very annoying level due to its length and the insane number of breakable objects in my way. However, two Megaton Bombs and a judicious use of my Missile supply cleared a quick path through the maze. It took a lot of self-control not to get the Four-Star item on the last screen after the Megaton Bomb goes off (what can I say, I like lots of points!).

Another wide open level, and another Megaton Bomb use at the end of the level. I was rewarded with some nice Missile pick-ups.

This boss moves fast, and as such, he is quite difficult to hit with Bombs or Missiles. The easiest way to go is to blast him with 19 Flashes. He died quickly.

Lots of water in this short level. Thank goodness for Life Vests.

I don't bother to use a Candle in the forced underground visit; it was faster just to run. Another Megaton Bomb was used here to save some Missiles.

The third dark level. The third Well of Hope is here as well, doubling my item supply yet again. I had a little trouble maneuvering in this level for some reason, but not too bad.

6 Missiles killed this boss. Moving on...

Bombs became more important from here on out, since the seventh and eighth areas have many breakable blocks that cannot be broken by Missiles, instead requiring multiple bombs to break. The fourth Well of Hope is here, also, which I visited not only to double my items yet again, but to double my bombs as well. Keeping a high number of bombs available was VERY important, as will be seen.

Just ran to the right with Boots, kept my bomb supply high, and used a Megaton Bomb to clear the end.

16 Flashes killed this boss without letting him fly around too much.

One Megaton Bomb cleared the complicated opening screen with ease, a mix of bombs and Missiles cleared a path the rest of the way.

This guy is pretty fast, but 6 Missiles took him out.

The final Well of Hope is here, which gave me 68 Missiles for the final period. It eventually proves to be enough.

The final dark level, and I just happened to have one Lamp left. I used Missiles where possible and kept bombing the breakable blocks. At 32:15, I used a Flash since I experienced lag (which is unusual for this game) due to the number of enemy projectiles on the screen at once. Also, I tried to keep a close eye on my bomb supply in this level, since I knew I needed quite a few for the last level. 49 bombs remaining was lower than I liked, but it turned out OK.

At 34:20, I heard that beeping noise after almost blowing myself up. Luck was on my side, as I barely survived to recharge myself. My heart skips a beat even after just watching it. Wow. Also around 35:10, I hit myself with two consecutive bombs AGAIN and have to recharge. Ugh. Guess my nerves were taking over? Such a shame after a wonderfully lucky run.

Blasted him with Missiles until he died. Easy stuff.

Just throw all the Missiles at him!

Many thanks to the verifiers of my first attempt at this speed run. Your insight was invaluable to this run.