Released in 1993 for the Genesis/Mega Drive, Rocket Knight Adventures is supposedly the story of the cheery chap Sparkster and his quest to rescue a princess. Who cares? The real story is Sparkster's fight to protect his image and reputation in the face of vastly inferior sequels. With his trusty and impressively-exploitable jetpack, lots of invincibility frames, and the power of blast possuming, Sparkster beats up his rival Axel Gear and the pig kingdom to secure his place in the pantheon of video game heroes. 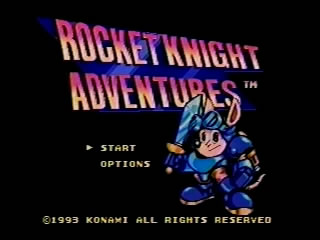 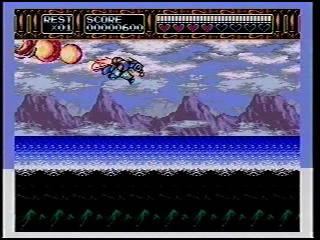 First off I'd like to get this off of my chest. FUCK YOU MIKE89! If it wasn't for your selection of this vary game for the SDA Tourney #6 (and actually at the time of writing these up, I just realized I've been at this for fucking over 3 months....FUCK!!!!!!!!!!!!)

Now don't get me wrong, this is one of my all time favorite games to play since I was a kid. Yeah at first I was glad that Mike89 had chosen this right out of the blue since in past tournies, there'd be no fucking way someone would pick a game I was even remotely familiar with. One could say this was destiny...well that shit blows.

From my time of being at TheSonicCenter, I've grown to understand two things about certain games.

Just for the sake of #2 if why I avoid speedrunning some of my games...or least to the degree of performing very tough tricks to obliterate a game. Ignorance CAN be bliss :[

I'm still pissed I managed to get a run I'm sorta proud of, but now that I think about it, I will be returning to this one day and will beat this time. Why not wait until then? I'm hoping someone else might take this up and show me a thing or two and that I can finish a previous run I was in the middle of performing before this even crossed my mind. (DAMN YOU MIKE89!)

I'm also trying to be more lenient with myself because otherwise I'd get nothing done. I want to be able to say "yes, this is what I wanted", but I don't think that day will ever come because I will find a flaw and be upset with myself. Runs have to get out and this one is something folks wanted to see.

One thing I can say is that I've watched the recent TAS of this game enough and borrowed what I could perform and incorporate that into this run. This run I nailed a lot of the tricks I've been practicing over the months and figured out there is a bit of luck with game...which I loathed (I'm sure everyone else here does too).

How recent is this run? I haven't learned anything new from the time I finished to when I wrote these comments up.

Difficulty: There is a distinction in difficulty depending on which version you own.

Easy (USA) being the default difficulty once the game is booted.

Opossum Hopping: A term dubbed by Mike89 and VorpalEdge. When coming off of a boost, you can keep that speed by jumping on the very frame you land. This works best with a ground boost along with slopes to increase your speed.

Point-Blanking: Getting as close as possible to specific enemies or bosses to deal the most damage in a short amount of time. I use this a lot.

Boss damage type: There are two types of how bosses take damage in this game;

HP based-Meaning they have a hidden amount of health that can be hit repeatedly without delay to kill them. Using your most damaging attack is usually best.

Hit Point based-Can only be hit a number of times no matter what attack is used.

Enemy Swarms: Most enemy swarm segments of the auto-scrolling sections of stages will stop and advance to the next segment when the last enemy and all others are off screen. There are two exceptions;

-Stage 2, the last swarm will time out and advance regardless of how many you've killed

-Stage 6, if apples are present, they must be off the screen to advance

*all of the following come from http://tasvideos.org/1670S.html *

-Sword swipes last 8 frames, and do 4 damage each frame to enemies within the area.

-The crescent slash produced by a sword swing causes 12 damage when it impacts a target, and can damage multiple targets if it connects on the same frame

-Diagonal (up-left/up-right/down-left/down-right) boost charges cause 16 damage upon impact, and initiate a circular boost for the remainder of the boost time

-Orthogonal (up/down/left/right) boost charges cause 32 damage upon impact, and initiate a circular boost for the remainder of the boost time

-With one exception, enemies that flash cause lag each time they take damage (the exception being the stage 6 bosses during a specific portion)

-Enemies with HP will continue to take damage, even while flashing

-Enemies that are Hit-based will not take damage while flashing, but will still cause lag when hit

*note* I'll try to cover what I don't talk about in the commentary...please forgive me, it's my first time recording commentary and my mic sucks >_______> *note*

First area is pretty much straight forward with some slight luck with the pigs. Regarding the pigs in cars, I changed this up some to stay in the general middle of the little area waiting for the cars to come to me. It's faster to scroll the screen to they show up in the foreground sooner. The 2nd car showed up about the average time he usually does, but sometimes I can get him to get there a lot sooner than what was shown. I try to hop around after boosting as much as possible with what room I have. These walkers suck. Hitting them from behind proves much faster than the front so I do that as much as possible. I still don't get how the TAS pulls off taking out the 2nd one that shows up first, then the 1st one that appears because that shit just doesn't work. I hate fighting the tank after the bridge collapses. The Dragon sub boss here sucks so much. The luck involved with it is never on my side.

I try to fly through the first castle hallway like in the TAS, but come to find out, the timing sucks horribly. I try regardless...and failed. I found some good spots to boost through the other hallways, but most likely than not, those fail too (except they didn't in this run). Boosting before the boss door just recently starting to fuck me over and I still don't know why. I thought it was my position or my boost timing or if I held a certain direction...none of that mattered.

Boss goes down as soon as possible with this pretty easy strat from the TAS.

Hop through the vines to speed up some. I hate this snake son of a bitch. Fucked up my exit......*RAGE*

Was worried about the "head" of the boss not going down before I got hit a 2nd time. "Hands" go down not as fast as they should, but decent enough. "DAT ASS" was fast.

Was fun finding out you CAN go TOO FAST in the first AREA and die...SHIT SUX >:[. Second area surprisingly hasn't fucked me over in a while, and this was no different. Crab sub boss went like shit though. "for everything good, there must be something bad immediately after" ONLY IN MY RUNS! :[. Third area...was also fun finding out you can fall off the BACK of the fucking walkers. Boss went well, but I could have had less health upon completion.

First sub boss is dumb. Outside, the 2nd barrel is starting to troll me so hard. Flamethrower was good only because I didn't die and I got most of the tough boosts in. If I could have killed it by the time one of the bombs drops, that would have been great, but oh well...hard shit is hard for a reason.

Here's the area where I couldn't decide to keep this run or trash it. Basically I thought I lost a great deal of time here due to a huge error on my part. In reality, it wasn't as huge and the time lost isn't as great either. Running this area over and over proves the lasers set off at random intervals. I had a somewhat decent approach to this, but that clearly didn't do the job and I've never had this setup before where I was getting stopped so much. I then screw up and boost too early slowing me down about 2 sec. I say about 2 sec because I clear this part in about 17 sec. I averaged this area with about 20 or so attempts after doing this run the day after and gotten about 13-15 sec. depending on the setup. Fastest was about 11-12 sec. which needs luck. Boss went great and even my new strat for that little pig asshole (no matter what, it would have sounded gross, so fuck you) went off better than I thought.

the only thing I hated, was the beginning with those little pig heads and how Axel and his minions were being little bitches.

Got the first sub boss down to just 4 boosts, but I guess my timing on console was a smidge off. Couldn't do the same for the next sub boss, but I think I know why now. Axel (3rd) lost me a bunch of time due to how hard it is to get him to follow you instead of boosting off into space. The rest is easy shit so fuck it...

Mike89 (despite what I've said at the start, I don't hate you :D )
VorpalEdge (for his helpful tips and encouragement. good luck at the marathon!)
Normand (indirectly giving me the motivation, I still think I'm missing something...)
Upthorn (it was his TAS after all)

various others for their support