Released by THQ is 1992, The Adventures of Rocky and Bullwinkle and Friends features the classic cartoon duo in a platforming adventure to recover Bullwinkle's inheritence with the villains Boris and Natasha attempting to stop them because they're villains. We'll not mince words here, this game's pretty awful. I personally like to think the code name for THQ's project after this was "And now for something we hope you'll really like." 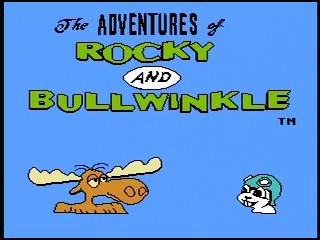 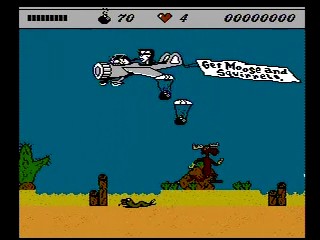 The Adventures of Rocky and Bullwinkle and Friends.

What a mouthful. Of crap.

Well okay, I loved the show - it was charming and awful in all kinds of ways that made me happy.

And honestly, that's what this game is to me now. It's probably one of the worst games, if not the worst game on the NES, and I love every terrible thing about it. It's got a special kind of charm to it.

I already have a run up on SDA for this, but my old run had a few mistakes that I REALLY wanted to fix. You'll notice this run is much cleaner.

Rocky's special move is to fly. Other than that, he's pretty useless. The flying itself drains health, but Rocky is otherwise invincible. Rocky doesn't jump very high on his own without his flight, though, and he cannot climb stairs. Squirrels apparently suck at stairs.

Bullwinkle is much more useful in the speedrunning sense, because his special move is to charge really fast. He jumps higher, and can even climb stairs! Wow, moose, go you!

When you get hit by goof gas, your controls are reversed temporarily. It lasts longer on Rocky than it does on Bullwinkle, which makes charging a dumb idea, and it also kills Rocky's ability to fly.

So yeah, if it's not obvious, the strategy comes from charging as much as possible with Bullwinkle, and using Rocky when necessary.

The improvement of 4 seconds in this run comes from making fewer mistakes, and taking a little bit more risk in level 5 that I was afraid to take before. As I found out later, the window for some of those jumps is pretty precise and I have no idea why I went for those jumps, other than the fact that this is a short run.

The difference between this time and the sums of my best levels is a second and a half. This can still be improved slightly. My biggest mistakes were in level 4 where I mistakenly bumped into two animals because I rarely ever get the full jumping pattern right in real runs (always fine when I practice, I swear), and in level five I had a little mess-up right at the start near Natasha, and also by her at the end.

I hope you enjoy this run - I'm quite happy with it.