Released in September 1989, "Who Framed Roger Rabbit?" is based on the film of the same name. As private eye Eddie Valiant, the player must find the pieces of Toontown's will while keeping Roger safe from Judge Doom's henchmen. The main characters from the film make appearances, including Benny The Cab who is instrumental in exploring Toontown before the final confrontation with the menacing Judge Doom. 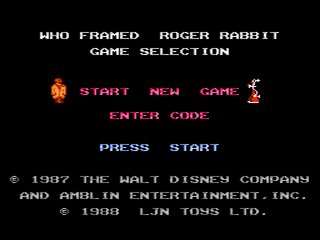 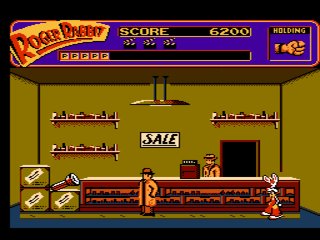 As most movie-based games go, this one isn't anything special, but like many other games, I enjoy it for the high difficulty level.

Simple enough concept: Collect 4 pieces of a will and deliver them to the ACME warehouse. They're randomly located throughout the game, requiring a bit of luck for a good speed run, but that it. No problem, right? Um, think again.

There's this other matter of defeating Judge Doom when you reach the warehouse, who happens to be one of the toughest final bosses in all of the NES games! No matter what weapons you throw at this guy, he hardly takes any damage. Meanwhile, every hit you take from him has a major sting to it.

Only one thing does any decent damage against this guy: charged punches. The problem with this is that once it's thrown, you normally have to charge up another one, during which time you're vulnerable to attack. However, if you tap the punch button with EXACTLY the right rhythm, you can simultaneously throw punches AND charge up the power meter! The result is what you see here: a devastating barrage of fists that leaves the Judge helplessly pinned against the wall! This strategy is a bit glitchy, but since I've never found any other decent approach to defeating this guy, I assume that this is what the programmers had in mind.