Rollergames is a game based on the franchise of the same name released in September 1990. The president (of the network) has been kidnapped by VIPER (Vicious International Punks and Eternal Renegades). The CIA and FBI lack the speed, cunning, and sheer brute force for this job, so it's up to some roller derby pros to rescue him instead. 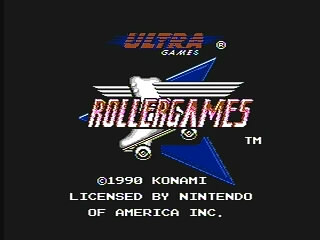 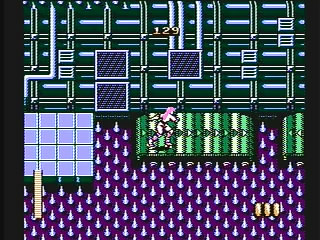 Rollergames was a TV show produced in 1989 combining the sport of roller derby with what were essentially Pro-Wrestling scripts. The show actually was very successful, receiving better rankings than shows such as American Gladiators, leading to a series of products being produced with its label, including a pinball table and two video games. The show only ran for one season due to its creators going bankrupt from other projects. All the characters in this game are meant to represent people in the show, with the exception of the final boss who was made up for this games ridiculous premise.

Only slightly abridged from the manual:
The president of the RollerGames franchise, Emerson 'Skeeter' Bankhead, has been kidnapped by V.I.P.E.R . (Vicious International Punks and Eternal Renegades). The CIA and FBI lack the speed, cunning and sheer brute force for this job. So instead, some chick on roller-skates has to do it. Cool.

There are two main things you have to know about this game as a whole to understand what's going on in this run. The first is that the platforming sections try to mimic how roller skates actually work as far as inertia, so coming to a stop and certain turns can't be done instantly. Think of the game as constantly being an ice stage. The second is that attacking is, in general, really random.

During platforming sections, all enemies die in 1 punch without any real issues. During fights, however, there are basically 5 attacks in the game. The basic press B can do any of the following: 1) a basic punch or kick, which does 1 damage, 2) a throw that you have to mash and does 4 damage, or 3) a kick, shove or hook that does 4 damage (Hot Flash does not have this attack). The game selects which attack as far as I can tell completely at random, although there are at least some rules you can use to prevent the throw (for instance, the game doesn't usually let you throw if you are too close to an enemy). For the purposes of this run, I almost never want the throw attack because the enemy flies through the air after it wasting about a second before they hit the ground and actually die. The second attack is a jumping kick that does 4 damage. Normal enemies will duck this attack randomly with about a 50% success rate, although again some spacing rules seem to influence the attacks likelihood of hitting (although it never guarantees it). These are your main ways of attacking, and make the fights incredibly random. The last attack, a punisher move, is a flip kick for Hot Flash and offsets this randomness because enemies can't dodge it and it does 8 damage, which is exactly a standard enemy's health. Unfortunately, you only get 3 punishers per checkpoint, so proper use of it to maximize damage is critical.

I select Hot Flash for the entire game. She has by far the fastest moving speed, and her punisher attack has the most utility. Her basic attacks are slightly worse, but there is enough platforming in this game that it is more than made up for.

Downtown-1: Nothing much interesting to say about this section. I lose about a second or so here due to mediocre fights, I was absolutely sick of resetting at the first door so I just decided to live with mediocre luck and hope it worked out later. The second fight went basically perfectly so I was satisfied.

1-2: The programmers intended you to go farther left and jump over the holes the enemies made, but forget that. The first part of the fight looks really weird because managing the RNG and what happens is a very odd process that I don't really know how to explain. That said, this is only about 1-2 seconds slower than what perfect luck with my strategies gives, and maybe 4 seconds behind what perfect luck with using all jump kicks. The mini-boss is critical to save special attacks for, because he has 16 health, can only be punched a single time before he blocks, and has high odds of blocking jump kicks. The boss is 'Mizz' Georgia Hase (misidentified as Lucy Ferball in the manual), manager of the Bad Attitude team. She has 8 health and each time you hit her she re-starts her wild running, which as far as I have found is invincible, so it's again critical to save a special attack to kill her after her first cycle.

The Night Highway: As the instruction manual says, 'This is an auto-scroll stage'. Positioning is important for the Combat Copter because his bomb drop pattern is determined entirely by position and he has a set number of bombs to drop.

Automobile Processing Plant-1: Not much interesting again, one of the few actual mistakes in that I run into an Icky Bop Crane (Konami manuals are the best), costing about 1/4th of a second or so, and I manipulate the first enemy in the fight somewhat poorly.

3-2: The first 3 Radon Sludge Juices (manual lol) are somewhat random in their pattern. Usually the second Sludge hits me and costs some time, but I managed to get past it and save about a half second or so. The fight abuses the fact that water instakills enemies that fall in, and punishers to kill the last enemy out of the door, after which I miss the pose position and lose a small amount of time for the computer to move me there. The last Sludge is again random but I didn't get lucky enough to get that skip (it happens maybe 10% of the time). The mini-boss again has 16 health, and again can waste a ton of time if you don't just abuse specials to kill her. The boss is John 'Guru' Drew, manager of the Maniacs team, and fortunately he does not have the ability to duck jump attacks, so I simply trap him in the corner and jump kick repeatedly. I do, however, jump too early for one attack wasting some small amount of time.

The Regional Freeway: 'Another auto-scroll stage'. Muck Truck isn't even position based so I just camp in a corner and wait for him to timeout.

The Jungle River-1: This is where the run actually starts as far as I'm concerned. The first fight here is a big pain and timewaster normally, in spite of how it looks this is actually a really good fight and I gained about 2 second compared to an average one. I take the route I do in the rest of this part to try and minimize enemy spawns which would normally cause a lot of lag. Second fight is solved with liberal use of the punisher, and then the cave section. The two jumps that I get very close to the Slicky Slides (this manual, man) for are 2 frame jumps and cost me more runs than I would like to admit.

5-2: The jump down off the ramps is a lot looser of a jump than it looks, and is probably the only actual skip I do in the run. The raft section at the end of the platforming is really obnoxious, speedrunning it means running full speed at the edge to trigger their spawn as early as possible, then landing on them with enough room to not roll off. The rafts are also what taught me the fastest way to stop isn't to push the opposite direction of what you are going, but rather to just stop pressing anything completely. The jump from the second to last to the last raft is especially nasty as it's actually an intended jumps and the rafts have pretty horrible detection in the vertical direction compared to horizontal. The first fight here is pretty mediocre, ideally I would throw more enemies into the drink, but this is still probably an above average fight overall. The boss here is Chuck Skull (or Skull Scrape), manager of the Violator team. He has 28 health, is entirely cycle based, and every 5th cycle is even longer than the others, so it's important to save all the special attacks for him. I then promptly jump into the lake for a quick swim and fake death.

The V.I.P.E.R.'s Pit-1: The maze sections are pretty nasty to navigate without hitting any walls or barrels, which is why the paths I take might seem odd. The fight here is pretty good, the last guy who spawns is the mini-boss from stage 1 so special attacking him twice is critical. An average fight ends with 99-100 on the timer so I gain a bit here. During the maze after the fight a lot more enemies are set to spawn, but the game has a limit on how many enemies can be spawned which I abuse. As far as I can tell there is no way to avoid the first Bill 'Bomb' Barder (Thanks again, manual) without slowing down for a long time, so I simply charge through it.

6-2: I try to maximize time spent on platforms with favorable directions and minimize on unfavorable. Fight here is above average once again, I've gotten 106 on this fight before but 102 or worse is far more common. Second moving platform section I actually know a faster route through, however it's an incredibly tight jump next to the Fire Islands (guess) with a variable timing, and you die instantly if you fail it.

6-3: One of my favorite looking sections of the run. The second jump over the spikes between the two Can-cans is actually a very tricky jump. You have to be within a few pixels of crashing into the spike in order to clear the Can-cans, which oddly you can only jump over during the highest point during their bounce.

6-4: A few mindless pits and a fight! The first part of the fight goes pretty well, 502 on the clock here when 500 is easily an above average fight. The boss, who has been affectionately named Kung-Fu Gandhi, is normally a very difficult to fight, and has a very respectable 48 hp. His punches and vertical jump kicks have very favorable hitboxes for him. Fortunately, after his forward jump kick he goes into a crouch which he cannot do any attacks from, a prime opportunity to jump kick him for 4 damage. Additionally, right after getting up, he goes into this same crouch, so with good spacing you can chain a second jump kick. Unfortunately, there's no way I've found to space him properly to get any more jump kicks, but you can then special attack him to tack on 8 damage, for a net 16 damage per 'cycle', requiring 3 cycles to finish him off. My work completed, I hop off the edge of the platform for another nice fake death before the run ends and we get the fantastic ending.

Thanks to all the guys at SDA for being generally cool, all the people who hung out in my stream to help keep me sane while I continuously reset on the first door of this game, and last but not least Xelotath for giving me a real reason to pickup this game again after not having worked on it in over a year, and also helping think of new strats for sections like 6-3 where it hadn't even occurred to me to jump over the spikes before he mentioned it.