Rosenkreuzstilette is a solid Mega Man clone by Japanese doujin developer erka:es, released in 2007. A rarity for a doujin clone game, the setting and cast of characters were created specifically for the game instead of being stolen from another series. The actual cast of characters is pretty much entirely comprised of little girls, which is in fact not a rarity for doujin games. Rosenkreuzstilette was followed up by a sequel named Rosenkreuzstilette Freudenstachel, demonstrating once again the love Japanese people have for creating German titles they can neither understand nor pronounce. 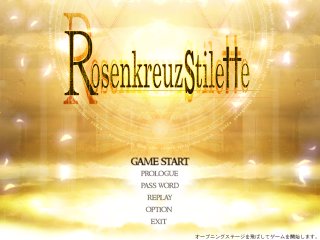 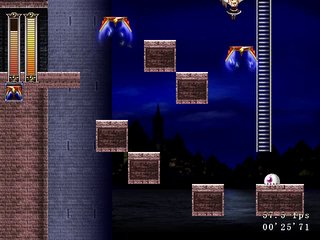 I started running this game shortly after completing it for the first time around August/September. I realized that there was room for improvement in Preddy's run while attempting to complete a decent SS (which may or may not ever happen at this point). I wasn't planning on submitting the run at first, largely because I didn't realize that more than a minute could be saved. Eventually I was able to cut the times down and add enough new timesavers to what I feel justifies a new run.

-Nathan Jahnke for everything <3
-Sarah for additional moral support.
-Preddy and Cremator for the route and the majority of the tricks and strategies used in this run.

Pretty straightforward. Most of this stage forces you to go quickly and doesn't leave much room for improvement. The most annoying part of the stage is snow sliding -- the timing is much more difficult than that of normal sliding. The best luck I've had is with button mashing but it's hard to be consistent with it. There are a few tricks in here which don't really save a lot of time yet take a lot of precision (such as the fall to the higher ledge at about 16 seconds into the stage) but I wanted to get them in anyway to get the run off to a good start. Other than that, this one was mostly about trying again and again until Freudia gave me good patterns. I ended up coming back to it several times until I was happy with it.

A lot of the improvement over the previous run comes from this stage. It's mostly about getting lucky with the midboss (Freudenstachel is very random and the fight can easily go on for twice as long as it did here) and Grolla herself, who only seems to like getting right up in my face where I can't dodge her if the stage went well. The rest of the time is mostly faster platforming and more precise sliding. This segment still probably contains the most room for improvement, if not just because of the length alone.

Liebessturm causes you to stop for a second if you use it while on the ground, so I do a little hop before using it in the third room to dispose of the skull. The strategy I use in the long room near the end seems to be the fastest as you can only have three eins on screen at a time. It's possible that there is a better way but I wasn't able to find it.

This segment was annoying until I realized you could just jump over the reptile at the beginning.

This one on the other hand used to be pretty easy until I decided to go for a difficult but much faster boss strategy, which made it probably the most difficult of the 8 main stages. Basically:

1) Start off with a charged bomb.
2) Right before the bombs explode, pick one up. Bombs can't explode while you are holding them but their timer is not reset. As a result, this one will go off right when you release it. If you pick it up too early, it will explode too high and you won't be able to do the rest properly.
3) Somehow jump up onto the ledge without getting hit by her shield and start a chain of bombs using the explosion from the previous one. This is way harder than it looks... or maybe I just suck. >_>

So yeah. This was actually the only time I was able to do it in several hundred attempts. Because of that, the stage itself isn't quite as pretty as some of the others. The second zwei could have been placed earlier, sliding could have been better in places, etc.

I take damage intentionally a few times throughout the stage because Grollschwert, Sichte's weakness, becomes stronger with lower health.

It's very difficult to say if Lilli is worth collecting. I've gone back and forth a few times... more on that later. Props to Cremator for the Zwei strategy near the end which I probably wouldn't have found on my own.

Stage 1 went well enough. It's possible to climb that room from MM2 in three eins without having to slide at the end (which can be risky) but I've found that doing so is easier in general. The boss can probably be slightly faster if you can avoid getting hit. It's random for me.

Stage 2 is pretty easy in theory but for some reason I died here more than anywhere else. >_>

Stage 3 was probably the hardest. The zwei placement and timing of the subsequent jumps are really tight. Couldn't have asked for a better Death fight.

Stage 4 is kind of bleh. I accidentally froze the skull near the beginning which messed me up. Luckily the boss cooperated for once and didn't teleport.

Final segment. Longest and by far the most difficult. There's just so much luck involved that I had to settle for whatever got me under 31 minutes. Even though it is nearly two whole minutes faster than the previous run's, I'm not really satisfied with it.

Toward the end of the long room at the bottom of stage 1, I avoid waking up the met by sliding to the very edge before jumping over the hole. Otherwise I would have to wait for its shot to pass on the ladder for a second. The timing isn't too bad. The spider boss here is the single worst part of the run. I've gotten a three round fight a few times but it is way too random to rely on, especially since there are so many other random spots in this segment (like the final boss).

Stage 2 went pretty well (for once).

Stage 3 went well for a while... and then Zorne happened. I timed what should have been my final shot slightly too early and then turned my weapon off in order to start charging for the next boss. I had to quickly switch back which cost about two seconds. The time lost is not a big deal all things considered, but it's just such an ugly, stupid mistake that I considered throwing away the segment.

The final boss was much faster than usual. I sort of wished that Lilli wouldn't have cooperated like she normally doesn't so I didn't have to feel so bad about the mistake in stage 3. Oh well. One thing that is weird here is that Lustatem will sometimes hit for an extra point of damage (four per round instead of 3). If it was somehow possible to do this every time, then it might not be worth collecting Lilli as you could finish Iris off in two rounds without her. Lilli doesn't really take much time to collect though, so it's hard to say. Either way, the difference would be negligible.

My goal at this point was anything sub-31 so I decided to keep it. A few seconds can be saved in just about every segment, but sub-30 seems pretty unlikely. That doesn't rule out the possibility of a faster run in the future. Anyway, I hope you enjoy.

I'm not in the mood for writing detailed comments right now, so I'll try to keep it short.

The main problem with running this game is that it sometimes lags on 10-frame spikes, which becomes a major issue when you're dealing with precision jumping and strict timing. I think there was just one or so of those kind of moments in this run. As I remember they didn't end up costing much time, if any.

I've run this game so many times that during the course of running it, I started to pick stages at random to keep it interesting for me (you get no weapons so the route is irrelevant). Sometimes I forgot which stages I'd beaten by the time I was choosing another one, which was a tad humiliating.

The run deteriorates somewhat towards the end of the run. I was tired of dying at some very specific spots, for example pretty much anywhere in the first half of Sepperin 4, some parts on Iris one (one of them being the boss battle) and the Grim Reaper fight. This is why I gave myself a bit of leeway. Iris evaded me more than usual, which probably adds a lot of time to this run. Seeing that fight is at the very end of the game, there's very little I could do about it, unfortunately.

I occasionally have some problems with dashing; this is because my controller was very worn at that point and on the verge of falling apart (which it did after about half a week after completing this run).

While I know there are some things that could be better, I feel this run is worthy of submission. Overall I did well enough and some things went even better than usual. For instance, I don't recall getting a two-round fight on Schwer-Muta before.

This is one of my favorite games of all time, so no doubt I will find myself running it again later, but for now I'll give it a rest.