Released in 2005, Sacred Underworld is an expansion pack for the 2004 game Sacred, developed by Studio II Software and Ascaron Entertainment. It uses the same formula as Diablo: first hack, then slash, grab the loot, spend skill points, and save the world. However, it has a unique storyline about an unlucky necromancer who sets free a giant demon, a freely explorable continent instead of randomly generated areas, two single-player campaigns, and seven character classes including dwarves, angels, demons, vampires, and elves. One thing Sacred is famous for is its crazy easter eggs and funny references to other games, like the BFG from Doom. The game is also famous for its bad controls and horrible bugs, which prevented it from receiving the appreciation it deserved. 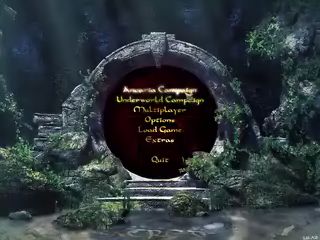 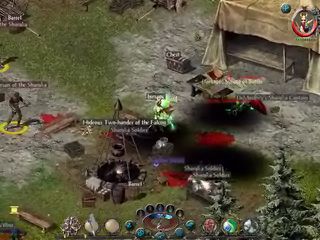 First of all, I would like to say thanks to SDA, its whole staff and every member of the speedrunner community, too. You gave me a lot of happy moments, in form of great speedruns, plus you helped me to make my own run, and submit it. Thank you!

I started to plan this run in 2007, but then I didn't even played the game for a year. This autumn, I re-planned the route, and with much more segments, luck manipulation, new tricks and strategies, I could cut down more than half an hour of the time (it was 2:15 last year). However, this run is far from perfect, since it's affected heavily by randomness, just like Diablo II.

About the game and character build:
Although this game seems a generic hack'n'slash, it can't be played that fast and smooth as Diablo. The maps are drawn very bad, you can get stuck on almost everything, and the character really doesn't want to run around the obstacles. Sacred also has a delay in the mouse controls, which makes very hard to pick up the item you want precisely and fast. After an expansion pack and some patches, the game is still full of weird glitches and bugs (you can see a few of them in this run). But I don't say it's a bad game. This is a very enertaining one, just it is difficult to do things fast in it.

I played a daemon in the run, because she's the fastest and strongest character at low levels. The flying ability allows so many shortcuts that nothing else in this game. On top of that, I noticed that the daemon can survive easier than other characters. Maybe the flying form's defense bonus is glitched, but enemies, with more than twice the levels I had, could barely hit me. The build is mostly a fighter one in skills, with poison ring as the main damage source, but I also used blazing disc, which was originally needed for the medusa guard, but DeMordrey and Shaddar are faster with that, too.

About constant mistakes and improvements:
My biggest mistake was that I put the skills and items in their slots by hand, and not with right-click. I think I lost about 8-10 seconds because of that. Stupid me.

I'm sorry that I used the minimap that often, but I usually play like this.

The biggest improvement could be in the 19th segment. That would require the following: a similar enemy spawn in the dungeon, much more mobs near the matriarch, enough item drops to sell, two random runes, and get the exp from the meduse guard (to gain a level). with these, i could skip the killing part in segment 20. I tried that, but you know...I wasn't that lucky.

About the segments:
I tried to use only one camera view in the run (the second one), to avoid the disturbing zoom effect, but sometimes I had to change view. In some areas, it is easy to get lost, or get trapped by caster enemies, and it's easier to avoid them in the high-up view.

Thank you for reading these comments, and I hope you enjoyed the run!