Sarah's Run: Escape from Capital Evil is a 2010 puzzle solving game involving walls that rotate and buttons. Developed by Sophie Houlden, the game has been in the preview phase for several years and will not likely be updated anytime soon. 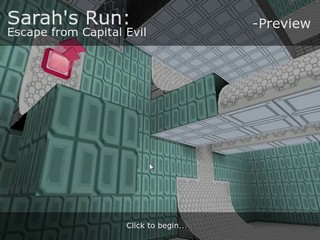 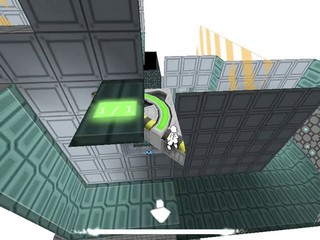 Thank you nate for your help encoding, ktwo for the help verifying, and all the runners and organizers of SDA for all the work you do. It's because of this site that I found out about speed runs, which I have enjoyed ever since. I hope that people enjoy watching my run too.

This run was born out of me playing the game for fun and enjoying it, then playing it again, then again, then deciding to just go for it. My first attempt was about 20 minutes, and after many runs I thought 7:30 was the optimal time. Getting sub-7 took me by surprise. Now I'm not sure the route can be optimized much more, barring someone finding a door-skip exploit, which I'm sure must exist, because this is Unity.

Mechanics:
The mouse moves the camera and makes you turn, which is my preferred method of getting around. But sometimes it glitches a bit, causing you to turn around and fly off the walkway you're on, meaning a reset. Altogether I'm not sure how I feel about the camera, but at least it isn't being held by Lakitu.

The main gimmick of this game is the boost. Boost does a couple things:
1. It turns you white and you leave white trails.
2. You run faster as long as you're on the ground, and you jump further. You don't jump or fall faster.
3. If the ground curves, you follow the curve, and gravity stays beneath you. That means if you run up a wall, you can jump and you'll fall toward the wall, for as long as you maintain boost. But you can only change gravity by running over a slope, so jumping at walls doesn't work, except when you're on a slope (see level 4).

It's also worth noting that there are 3 types of floor platforms that show up through the game:
1. Red platforms, which put gravity beneath you, even after your boost ends, and are required for levels 9 and 10.
2. Blue platforms, which save your progress in the current level and therefore play no part in this run.
3. Yellow platforms, which cure a debuff that prevents using boost.
To hit a platform, you have to stand on it, so jumping at one on a wall doesn't work. Which is a shame, because it would make level 2 faster.

Misc:
You can play the game at sarahsrun.sophiehoulden.com

And I hope you do, because if enough of us play the game and tell Sophie Houlden we like it, she might release a full version (despite the last update being in 2010), and that would be awesome.

The rest of the comments are level by level. I suggest watching the levels first, and then reading the comments if you want to learn more about my strat for that level. Thanks for watching!

Level 1
4 out of 5 runs end here. Running over the final gap without jumping require a near-pixel-perfect angle, which seems to be not straight on, but slightly to the left or right of straight. I think Sarah's hitbox is slightly wider than it is long, and that the right angle gives her enough distance to reach the edge and a wide enough base to land on it.

Level 2
Welcome to buttons! They're surprisingly easy to miss, because running on the edge of the square they're on won't even hit them. I've lost a lot of runs because I wasted too much time running around them without actually getting on top of them.

The way bounce pads work is: you go as high as your previous jump, minus a bit (with a max height less than the ceiling of this area). Your second jump also kills your momentum, so if you double-jump too early you won't go as high as you otherwise would have.

Level 3
When going upside down in the second room, you can drop from the curve and land on the button. I'm not consistent enough at it to get it every time though, and I'm not sure it's faster, but it looks hype.

Since making this run I also found a faster route for the second room is to jump onto the doors from the incline, ride the upper door out of bounds, and fall toward the next area. It saves about 2 seconds.

Level 4
This is the scariest level for me. It's in the middle of the run, so I've gotten through levels 1-3 without any major mistakes, but am nowhere close to the end. The slope jump at the beginning is a tight trick, and the fall onto the button surrounded by electricity is difficult enough that it's ended a lot of runs by itself. Even after a lot of practice, I breathe a sigh of relief when I get past this area.

To explain the slope jump: when running up the first wall, you can jump directly to the 90 degree slope on the right by jumping from slope to slope. This in turn allows you to get to the moving block early enough to catch its first cycle, which saves about 8 seconds.

Level 5
I messed up the first two jumps and lost 2.5 seconds. Otherwise this level is trivial.

Level 6
Standing on a door while it opens will make it carry you through the wall. Then you can use that to go where you like, like the end of the level. Unfortunately this doesn't save time in any other level because of where the doors are positioned (except 3 as mentioned).

Level 7
Lasers = death! Or at least the death of a run, because they make a door shut and it takes about 7 seconds for them to reopen.

Level 8
The rotating platforms have ended a lot of runs that get past level 4, because if you're too close to the blocks when they rotate, they'll knock you to the side when they turn.

Level 9
I hit the buttons in groups: 1, 2-3-4-5, 6-7. I think that route is optimal, though I haven't tested all of them. There are a lot of tight movements required in this level, and holding a direction even a second too long can send you off target and waste 5-10 more getting back on.

Level 10
The idea for this level is that you have a cube floating in the middle of the room, and you have to get on it from different directions to hit all the buttons. I'm pretty sure the intended route looks nothing like this, because there's a second floor in this area that I never visit.

Think of the sides of the box as being labeled top, bottom, 1, 2, 3, and 4, with 1 being the side facing away from the start, 2 facing to the right, 3 facing the start, and 4 facing the exit. There are buttons on every side except the bottom.

My route is: 1-top, 4, 3-2. Hitting 1 and top first saves me from changing the gravity back to the floor or going to floor 2. Hitting 3 before 2 allows me to use the trick you see to move between them. I chose 4 second arbitrarily, but in testing found it to be faster than doing 4 last.