Released by Hudson in 1996, Saturn Bomberman brings the classic Bomberman formula to, as the title suggests, the Sega Saturn. In the single player mode you collect a variety of power ups to blow the crap out of assorted enemies and four target spires to clear stages. In the multiplayer, you can get up to ten players together to collect a variety of power ups and blow the crap out of each other. They shoehorn a plot in there too, something about dinosaurs. 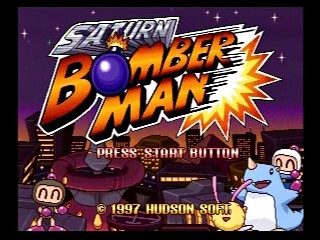 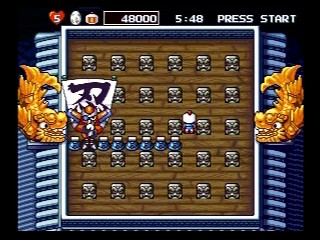 There' s probably another 3 - 4 minutes to come off, but I'm done trying to improve this... too much luck involved.

Bomberman is a random game. Randomness in games is a given, but speedrunning random games can be aggravating. So why did I run this? Well, there's a small bounty out for it and I happened to have the game. I'm planning to sell the game if this is accepted, so no more improvements from me.

There are two modes runnable in Saturn Bomberman, Normal Mode and Master Mode. In Master Mode, the layout of each level is set.

In Normal Mode, the powers (number and type) on each level are set, so I have that much going for me; however, the layout for each level is randomized somehow. I haven't been able to find a pattern except in the last stage.

Here are the power-ups that are helpful in Normal Mode:

Firepower: Increases bomb explosion range by 1 (up to 16). I get these whenever I see them so long as they aren't too far out of the way. Staring power is 2.

Roller Skates: Increases Bomberman's walking speed. There doesn't seem to be a limit, but too many and I lose control, running into my own bombs.

Sandals: Opposite of skates.

Line Bomb: This power allows Bomberman to place all bombs possible in a line. This is good for quickly laying down an explosion area capable of clearing out a level quickly.

Power Glove: One of the most helpful powers, it allows Bomberman to pick up a bomb he's standing on and throw it around the map. It'll bounce until it lands on an open space.

Heart: This power allows Bomberman to take damage and survive. With the random and fast paced nature of the game, I find I need all the hearts I can get.

Fire Suit: The vest protects you from all damage, and allows you to use the continuous bomb explosion trick.

Bead Bomb: The most useless power-up, or maybe I don't know how to use it effectively. Basically shoots a bomb forward after charging up for a short while.

Block: I call this one the walk-through walls power. It's the most useful power for speedrunning.

Bomb Kick: Kicks bombs in a straight line. It's stopped if it hits an object.

Penetrator: This causes bomb explosions to clear swathes of soft blocks, as far as the explosion reaches. It's potential for speedrunning is there, but it lacks the precision against bosses.

Remote Control: Puts a detonator on all bombs, which allows Bomberman to trigger the explosion manually.

Power Bomb: The first bomb layed will have a massive explosion as if Bomberman had full power, and it lasts longer than the normal bomb explosions. This slows down progress as you have to wait for the explosion to die down.

Rubber Bomb: This turns bombs into bouncy bombs that rebound when kicked or thrown. More randomness? No thanks.

Exclusive Power-ups: The Bomb Pass and Bomb Kick replace each other. Also, the Penetrator, Remote Control, Power Bomb, and Rubber Bomb are all exclusive.

Eggs: Hatches a random Dinosaur. Each has three evolution stages. Only the first three have possible value beyond taking an extra hit.

Green: Dash
Level 1 - The baby dino runs until he hits an object, then is dizzy for a bit after.
Level 2 - No more dizzy at the end of his run, faster dashing, and the ability to stop short.
Level 3 - Faster and able to change directions.

1-1 - In the first level I hope for at least one bomb and one power. Here I have good luck with and get both bomb drops plus the power, but missed the egg. With luck this could be 10 seconds faster.

1-2 - Grabbing this early skate makes the entire game faster. I took some time to fish for the egg, but didn't find it. Missed out on 6 seconds.

1-3 - Fairly quick, I didn't have to fish for the heart or power too much.

1-4 - Took some time to get to the exit due to the extra bomb power. I might have been able to skip it, but would have been in a bad position if I didn't get one in 1-6 (I didn't).

1-5 - I ditch the purple dino to utilize the glove, but I accidentally place a bomb that traps me. What a waste of a heart and time.

1-6 - The glove helps cut this level down quite a bit. Picking up the dino here allows me to take a hit at the boss if I need to (I usually do), but it also keeps me from using the glove to take the last orb out. A number of seconds wasted.

1-Boss - Castle Joe's AI is pretty easy to lock. I lose the green dino due to moving too fast, but I wanted to ditch him at the next level anyway.

2-1 - That darn bird egg delayed me a bit, but the layout of the level was one of the quicker ones.

2-2 - I completely miss the fact I didn't take out the orb in the lower right. At the same time I pick up the walk through bombs so it's not a total waste, but I lost a good 5 seconds.

2-3 - Another heart to get, and it appears rather quickly.

2-4 - Yet another level destroyed by help of the glove.

2-5 - This one can take a while with all the beetles throwing around my bombs. Taking that hit from the beetle was unfortunate, and I didn't want to risk running for the exit with the caterpillar so close.

2-6 - This is a large level, and hides the line bomb. A little slow finding the power up, but the pink dino helps.

2-7 - Found the heart rather quickly, but lost my dino.

2-8 - Found the remote detonator early and headed for the finish. This level can easily take another minute if I need to search everywhere for the detonator.

2-Boss - One of the fastest fights I've had with the ninja. He can be really annoying.

3-2 - Almost laid bombs right in front of the train. No luck on the orb in the top right, sometimes there space to throw a bomb.

3-3 - Found the heart early, but bad luck with the train and enemies caused this to be a very slow level. Lost at least 20 seconds.

3-4 - Making up for the last level, I get good luck and burn throw this one.

3-5 - This is an average level, which I haven't found a reliably fast way to finish.

3-6 - I nearly forgot about the orb in the bottom right, and get lucky with a throw.

3-7 - Finding the vest made this level go about 20 seconds faster than normal.

3-8 - Need to find the walk-through walls power, and I find it within the first 10 seconds. The blue dino makes an appearance to help me take a hit later on.

3-Boss - Wow, Rodeon is the most random part of this game and he trolls me to no end in this run. The best luck I've had is over a minute faster.

4-1 - By this point I don't need to worry about power-ups. With walk-through walls, remote bombs, and line bomb, I can speed through most levels. I do pick up a bomb power to make sure I have enough though. I have no idea how I became invincible. I think it was the meat, but that's supposed to be just worth some points.

4-2 - I end up taking a hit getting rid of the blue dino, which slower me down a bit.

4-3 - I get lucky and have an opening at the top right orb. I usually have to bomb my own path.

4-4 - I need to wait for the bridges to appear, but got a little distracted in this run looking for the egg and was a little slow.

4-Boss - Birdon isn't too bad. My worst enemy is myself now because I can blast and lay bombs so fast that they can backfire.

4-5 - With luck I find an egg, almost missed him. I can always use the extra hit it seems.

4-6 - Went faster, although I lost a second or two with a misplaced bomb.

4-7 - Walls seem to be a problem in this level, and I seem to get stuck navigating the level whenever I'm here.

4-Boss 2 - Crator is another random boss, although not as bad as Rodeon. While he's spinning he's invincible. Although he didn't do that much, I got caught in his ice blast once. Quickest I've done this is when he didn't spin at all, about 15 seconds faster.

5-2 - These metal slimes are always tripping me up.

5-3 - I fish around for the egg a bit, but don't find it. Then the metal slime slows me down again.

5-4 - All the enemies start to get to me and I take more time then I need to. Nerves are already building.

S-2 - I'm looking for the heart while waiting for the blades. The Penetrator almost ruins the run.

S-3 - A little slow getting by the lasers, but too many runs have ended because I take a hit from them.

S-4 - I head to the lower right where I usually find an egg and heart to pick up. This level's powers seems not random like the rest.

S-Boss - Mr. Meanie's robot is pretty easy with the right attacks. If you see me delay it's because his attacks can trigger my bombs. I lost about 4 seconds from waiting.

S-Final Boss - Dr. Mechado and the cat gang went fairly well. I forgot I can get hurt by the good doctor during his speech. The final robot went really well with none of his annoying fan action.

With some good luck and some bad, I end up here with an above average run. I can see another 3 - 4 minutes coming off from the best luck and execution, and possibly more if I'm underestimating luck in this game.

There are some set power-ups including the heart and egg in the lower right of S-4, a bead bomb in the upper right of 2-2, and a heart in 3-7 (upper left) and a power-up in 4-6 (lower left) only reachable with the evolved pink dinosaur. All other power-ups seem completely random.