Serious Sam: The First Encounter HD, a 2009 remake of a 2001 PC game developed by Croteam, is the first game in the Serious Series. There's a plot involving an alien overlord named Mental, but really, it's just an excuse to shoot large numbers of ridiculous enemies. The game pioneers the series trademark: dumping you in huge arenas with hordes of enemies, and then sending more enemies against you at once than many other games have total. 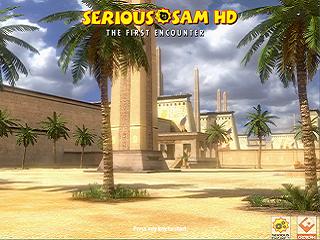 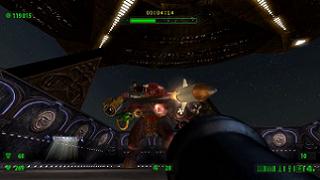 For information about tricks and a list of changes compared to the original game, visit the SDA Strategy Wiki. I've been running this game on and off for over three years now, and a ton has changed since my original runs on SDA. I've been running most of the Serious Sam games since then but HD TFE is still my favorite one. The HD versions are actually quite different from the original games and contain way more bugs, which makes some cool tricks possible. The most recent one, strafe jumping, was found by rayvex and increases your movement speed by up to 10%, which means every level had to be worked on once again. Luckily, after rayvex started running the game and beat pretty much all of my times with the new trick and other improvements he found, I realized that I could optimize some of my runs even further.

You can easily see how much faster strafe jumping is than running here, as the "unbeatable" time of 0:34 got improved by a whole 3 seconds. To get 0:31 you need to do really fast strafe jumping though, something which is only possible in short levels due to how tiresome it is to keep up the speed.

This is without a doubt the level I've done most attempts on. It has been improved many, many times in small steps as new strats were found. The current record involves an object boost at the start that sends you flying to the second area, skipping the boss fight completely. It's not easy to do since there's a pretty high teleporter perimeter that you have to avoid, and doing the boost itself involves a lot of RNG. After that, Gnaar floating is used immediately which I messed up a bit but it's still 10 seconds faster than doing it in a later room like in my old run, due to being boosted by a second Gnaar, a trick found by rayvex. This level is still somewhat unoptimized because theoretically it's possible to get boosted right to the final area, so I don't feel like putting more time into optimizing this route when I can go for a much faster time. One day.

Clipping through the ground requires 30 FPS and takes you straight to the ending cutscene area. From there you have to do a pretty tricky jump to reach the ending trigger, but with some practice it's possible to do it fairly consistently. I didn't get any Kleer boost over the bridge, but the Harpies were nice to me and the ground clip is really tough to do despite playing on low FPS due to the low height.

Thanks to Tezur0 for showing a better place for starting the Harpy flying. It's easier and faster against the cliffs than it is against the building but there's also a teleporter field that you have to avoid, so you can't start the flying immediately. Anyway, this flying is about as clean as it gets, although the ending looks kind of slow.

The bull riding is a lot cleaner and 4 seconds faster than in my old run, but the real time saver comes from the arena battle which is really optimized in this run. The bull riding part can be a couple seconds faster since I didn't get boosted into the air at the end, I was too close to the wall and got stuck to it.

The improvement here comes only from strafe jumping and is not as large as it should be since my old record included a lot of Kleer boosts, something which is just not possible when strafe jumping since you move too fast. However you can get the initial boosts of the two Kleers which might save a second. Since this level is so short and easy I focused on strafe jumping really quickly, just like in the first level, and I had to rest my fingers for a couple minutes between each attempt because of fatigue.

It's a bit easier getting through the moving wall before the final area with strafe jumping, but you still need a Kleer boost. Crouch swimming is used at the start of the water filled area until enough fish have gathered around you, and then it's up to luck. Better fish RNG can save a few more seconds.

This level used to take well over 7 minutes to complete, the longest level in the game by far, despite just running through it. The reasons were the final arena battle and the level just being really long in general. Later it became possible to skip the arena battle by clipping through the roof of the final room, but it made Harpy flying impossible since clipping required 30 FPS. However I found out that the clipping works on 60 FPS as well, it just requires extreme falling heights and a lot of luck since it's much harder to pull off. I optimized this level a lot, adding in a Kleer jump at the start of the level that saves a couple seconds, and this particular run went really well; the Harpy flying and landing were flawless, almost landing on top of the ending trigger. The Harpy didn't dive to me that quickly though, insisting on shooting another shot before doing so, but it's really much RNG based.

Sub-4 minutes was possible without strafe jumping but it really helps on this map because of the walking distance. The bull riding went good, I have to pick up the Cannon along the way because it's essential in the arena battle at the end. Bull jumps over the walls could have been a bit better though, and the arena battle is really hard to optimize. Still, it's 5 seconds faster than the battle in my old run. It's kind of ironic that out of all levels, this one is the only one that contains an arena battle that isn't skipped.

Another level done on 30 FPS due to the clipping glitch. I use Kleers to get me out of the level instead of the Werebull, it's just more consistent and way less annoying. Lost 2 seconds by messing up the floating Gnaar jump at the pool area. The ending can be improved as well but it's hard to keep jumping up with a floating Gnaar at low FPS in one go.

Normally I would get across the gap to the statue with a Kleer boost, but with strafe jumping it's possible to simply jump to it directly. It's really hard though so I only strafe jump as a backup plan in case the Kleer doesn't cooperate, like in this run. The Harpy RNG and flying went perfect and I'm using the same strategy as in Metropolis to clip through the roof to the ending trigger. It's way faster than the old strategy which used a Floating Gnaar/Harpy to reach the trigger by jumping through a non-solid wall. Anyway the ending part of this run could have gone a few seconds faster, so sub-1 minute should definitely be possible.

This is a unique level in that you need to collect two statues in order to finish the level (a mechanic that became much more common in TSE). Unlike the TSE levels though, this one is actually one of my favorite levels to both speedrun and play through normally. Once Harpy flying came around it became rather easy to speedrun though, but it's the only level that contains two sets of flying. Both the setup and flying went perfect in this run, and I use crouch to instantly stop flying at the first statue since it makes the Harpy get closer to you for your next flight.

I still haven't found a consistent way of getting out of the arena with the Kleers, so there's a ton of resets from the very beginning. I got out 2 seconds later than in my old run, but I improved the bull riding part by 10 seconds, relying more on skill than RNG.