The third in the series, Settlers 3 sees three gods: Jupiter (Romans), Horus (Egyptian) and Ch'ih-Yu (Chinese), battle each other in order to escape eternal punishment. An expansion pack added the Amazons as a 4th side. Unlike previous games it added Multiplayer and changed some of the game mechanics, such as no longer needing to build roads so that all units can now travel anywhere. 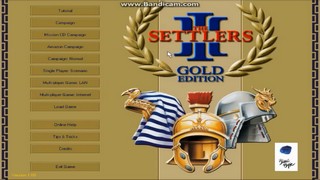 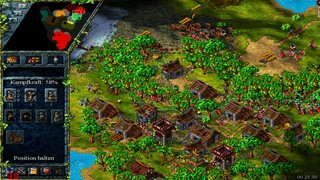 With enough luck manipulation, it is possible to draw enough enemy’s away from the towers to capture them faster.

Break down everything and send all warrior to battel with good luck and the right amount for each unit this fast time gets possible.

First of all I want to thank you - the SDA owners and all people who are involved with this fantastic form of playing games! Winning a game and play it till the end as fast as you can is sometimes science without cheating, but at all when someone gonna made it, really interesting to see how it works! Don't lose this confidence and I wish you the best in the next months and years!

The Game - The Settlers III -, not a game which is made for a good speedrun, but i had played this game a thousand times and thought about a good, fast run to the romans campaign – so here it is.

Normally you don't have more soldiers than your enemy does. But with the trick of attacking a tower and waiting with your army around the tower for the army of your opponent it is possible to kill more soldiers than you have without loosing much. The thing is, that when a tower is under attack, all units will come to help, but they must be hit a "checkpoint / point" at the tower, maybe the door or one side of it. If they don't reach this point the don't fight. So you only have to build a wall around the tower and kill all of the army from your enemy.

Yeah that's all, that's the magic of settlers III romans campaign. Nothing special, but a way to do this in a faster way most of people were playing it. Maybe there is someone out there who is faster than me and got maybe other tactics to be much more faster. I am looking forward to this.

At least I wanna thank the producers of the settlers III, my family and some supporters like Lucas 'luke' Renners to go further and get this thing to an end. Maybe see you in another game next time.

Build a Shipyard and smith on your home island and base hospital on expansion island. Everything you have to do is now to wait for the ferry to get your soldiers from home to expansion. Then take all your soldiers and destroy yellow in the south, but be careful of not loosing to much of your army, cause you need more than 5 soldiers to beat the blue one in the west either. After delete yellow I let some soldiers heal at the hospital to have more powerful fighters. The rest is to go west and beat the blue one.

Important in this mission is to break down every house you don't need and arrange with the Ore and the tools to make sure that both shipyards got a hammer to work. You need also a warehouse to keep the gold in it and to push your combat power. The rest of the mission is easy. Use the Towertrick for yellow and be sure not to lose many soldiers. The same thing works for blue in the north. Get every tower and you win the mission.

Well the mission I think you need double time luck. Cause not everytime you get the towers of the yellow one and then you must being lucky of the blue who don't build big towers! Normally this happen when you see the smith for Ore and not the smith for tools or the base hospital in the south of his base! That's so horrible cause you need much more time to defeat the big towers than the small once. So you can start again. You can send a thief in front of his base to see what he builds. The rest of the mission is easy. Just enlarge your territory to the yellow as fast as you can to get weapons and tools. Build smith for weapons and enough mines to grow your army faster. For food you use fish. If you are strong enough you only must destroy the blue one and the rest of yellow.

Jesus, I hate this mission, cause it took so long to win this mission. You have to rob all weapons you can get. You have to "rob" also some wood from the island in the north. Build enough ferrys and houses to bring more soldiers to every island. You also have to build some warehouse for gold to increase your combat power. The rest as always – tons of soldiers to one tower, stay there and attack this tower till the enemy soldiers walk into your sight and attack them.

Build Shipyards and ferrys, bring all your soldiers from your homeland to the island of yellow. Use the "Tower-trick" to kill most of the enemy soldiers, afterwards take all towers and you win the mission.

Most awful thing in this mission is, to pull down all towers. After this take all your soldiers to your enemy, use as usual the "tower-trick". Split your army to a group in north and south to get all the towers. It's more powerful with this tactic.