Released in July 99 and based on the comic strip, Shadow Man is the bearer of the Mask of Shadows, which grants immortality, the power to freely walk between the land of the living and the dead, and the ability to harvest souls. The current Shadow is Michael Leroi, who was living the good life until his entire family was killed due to his greed and bad luck -- which led to his becoming a slave to a 400-year old sorceress who needs his sexual energy to stay young. As if all this wasn't enough, an ancient evil named Legion has returned and plans to conquer and cleanse the mortal realm using an army of the undead. Naturally, it's your job to stop it. 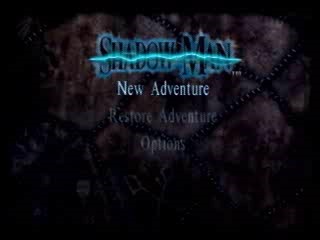 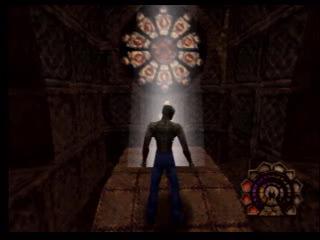 First, I'd like to thank LeCoureur103 for discovering most of the tricks that I've used in this run. He is also the one who discovered the huge sequence break which makes it possible to finish the game after collecting just 15 dark souls. I'd also like to thank Marshmallow for posting the first run of the game which I very much enjoyed watching and it inspired me to run this game.

A lot of the tricks in this video are not possible on at least the Dreamcast version of the game because the areas are very slightly altered there and enemies refuse to walk through closed doors.

Although released on multiple platforms, Shadow Man is by far the darkest title on the N64 that I can recall. I mean, the first item you use is your dead little brother's teddy bear to warp to different areas.

I also can't pass over the fact that our protagonist is black. And he's not Token!

This game is similar to, say, Mario 64. There's lots of jumping, climbing, swimming, lava, etc.; except, instead of 120 stars there are 120 dark souls...and instead of, say, stomping on an enemy you steal their eternal spirit. And instead of getting a cap you have tattoos scalded onto your body. Not too many differences, really.

I personally don't recommend this run to anyone who hasn't played it. Except maybe segment nine, starting at around six minutes. That's the Playrooms level, which has...interesting background music, to say the least. There's some nice happy, carefree jingles which don't fit the level at all. Then there's distorted laughing, children playing...then there's a high speed dentist drill and what sounds like some juicy root canals. Meanwhile, a woman is screaming out in horror and pain, which quickly fades to orgasmic ecstasy and eventually crazy laughter as our good dentist drills deeper. Meanwhile, a rubber ducking is squeaking away. Isn't that great?

There's a lack of water in this game. In fact, there's only one small area that has any. Every other liquid in this game is blood...oceans of blood.

OK, OK, I should probably make some comments on the run. Well, I basically collect the minimum amount of dark souls needed to beat the game (95) in such a way that I can skip the third temple (the temple of blood) and the third tattoo (Nager), which saves a lot of time. Other than that, there's not much for me to say. I use the most direct routes I can think of while trying not to screw up too much. Lots of areas are like a huge, dark maze and the controls can sometimes be unforgiving, particularly when jumping. That's a good cover for any mistakes (although there is one area in the game, in the room with two of the giant zombies called Trueforms, where I miss a jump that as far as I can tell is the game's fault, because there's something wrong with the way Acclaim made that friggin' boxes...but yeah, other than that you can blame me).

So, have fun watching this...I hope both of you enjoy it.