In January 1991, game-development company Natsume realized there could never be too many ninjas in the video-game world and released Shadow of the Ninja. The game's breathtaking introductory scenes reveal that evil Emperor Garuda rules the United States with an iron fist. As a ninja vehemently opposed to tyranny, you must progress through several side-scrolling, action-packed stages to defeat Emperor Garuda and overthrow his malevolent dictatorship. Ask a friend to join you for some simultaneous two-player action; he won't refuse when you tell him the game allows you to do all of the exciting things ninjas do: jump, slash, throw shurikens, and yell "Ya!" a lot. 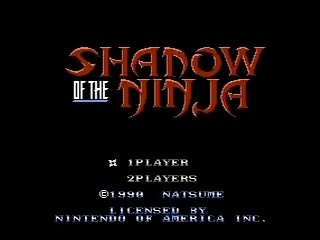 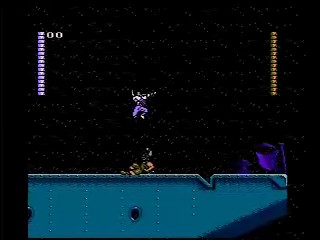 Thanks to Klmz for his Tas of the Japanese version "Kage" which taught me a few tricks and time savers. Also for answering my questions about wall zipping, unfortunately this trick doesn't work on the Nes because you have to hold up and right at the same time.

Also thanks to Grumpy Bear.