Released in November 1993 for the Super NES, Shadowrun (no direct relation to the Genesis title) is a action role-playing game based on the eponymous tabletop RPG by FASA. The player takes on the role of Jake Armitage, a man who is shot and nearly killed by a hit squad in the year 2050. He wakes up in a morgue, suffering from amnesia. Can he find out the truth about his identity and that of his enemies? 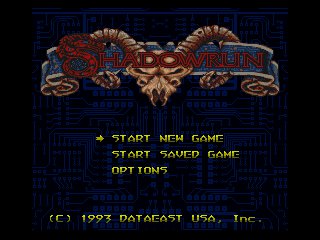 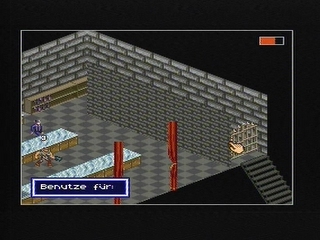 I honestly don't have much to say about the development of this speedrun. Shadowrun is one of my favourite games. I always watched my brother playing it when I was young, and I played it several times myself when I was older. So when I became interested in speedrunning, I knew that I would do a run for it someday, but I didn't expect it to be so soon.

Since we are all fans of segment breakdowns, I don't see why we shouldn't have one for this run so here we go:

I didn't follow a specific pattern, I just wrote what came to my mind when I re-watched the run, so if you have any questions(comments,suggestions,love/hateletters or death threats) send them to thelarsvoltaATgooglemailDOTcom or try to contact me on SDA's irc channel(Blumenriecher).

OMG! The run starts with a really ugly mistake. Bumping into the table doesn't cost much more than a second, but the shame I feel when I watch this can't be measured in time. However, the actual quality of the first segment is decided by how fast you can gather at least 130 nuyen for the lonestar badge, which I did pretty fast (2 Killers in a row is very rare), in fact it was so fast I never managed to do it faster, so I decided to keep this segment with mixed feelings.

Not much to say here. Since I didn't get 150 nuyen from the 3 Killers, I take the last 20 out of the apartments cabinet.
The shades and the lonestar badge are needed to get the credstick and the tickets.
The dog collar and the magic fetish are important later in the game.
Walking into the morgues cabinet doesn't waste time, because you have to wait for the morgue guy to get to the second cabinet.

We are at the caryards now and we can't leave until we fight the King or pay 4k(we won't pay, noone does that, noone has ever done that probably).
Before we can face the King we have to go to the arena and earn some karma in order to raise our Body and firearm (Korper and Schuswaffe) stats, so segments 3 to 8 are short segments, which only consist of one or two arena fights.
The first enemy is an ordinary gang member who is more dangerous than you think, if you haven't raised your firearm skill, but with some luck manipulation he will die eventually.

2 heavy dudes.
First one:"I will show you what pain is,you fool"
Second one:"I will avenge you, brother"
They fail.

Credit where credit is due. Thanks to Iamfanboy for these 2 awesome strategies.

You may have noticed that the woman says "Werkstattgelande", but the keyword you get is "Autofriedhof".
Don't ask me why, I just wanted to point that out.
Now we are ready to fight the King. It isn't really spectacular, after a while he just stands in the corner and waits for me to shoot him (just like the orc in segment 7). Again, don't ask me why they do that, maybe they just accepted their fates.

Its time to leave the caryards now.
With 19k it is possible to buy the defiance shotgun(15k), defuse the cortex bomb(2k) and hire Norbert(2k), who stays with you for a decent amount of time (although you only need him for the rust stilettos).
Selling the Beretta pistol and picking up the money drops from the orcs at daley station allows you to buy 3 slap patches from the kid at the caryards(I don't think its possible to pick up the first money drop directly). Apart from that, there isn't much to explain here.

The rust stiletto segment.
Its better to skip the enemies outside and run straight to the building.
With Norbert and slap patches it's not very hard in there as long as you shoot gang members and the gang leader first.

With the leaves you get from Kitsune, it is time to meet the mysteriously floating ghost dog in his secret hideout (an almost empty warehouse with a big circle in the middle) and get the heal spell.
The money from the computer and the octopus is needed to buy the bottles and the wooden stake at the talisman shop later.
All in all this segment is not very exciting, so lets move on to the rat shaman.

This segment is one of the best. There is nothing to complain about.
I hardly took any hits from the rats and the rat shaman didn't freeze me even once, so I'm very satisfied with this segment.
Back to the arena! There are still battles to be fought!

Awesome! I didn't know this is possible until it happened.

One of the most difficult segments in the game.
You can barely move during this fight and most of the time you die within the first two seconds(at least with 50HP), but it didn't take as many retries as I expected.

Finally the last arena fight. Not much to say here. I think it's pretty decent.

With bags full of money we head to the talisman shop just to empty them again for the most expensive bottles in the world (9k for 3 bottles) and a wooden stake(2.5k This is madness!). After the biggest rip-off in history, we fill one of the bottles with ordinary water from an ordinary fountain in tenth street(that was worth it).
Back at Daley station we spend the rest of our money for boosted reflexes, which increase your fire rate dramatically (easily the best upgrade in the game).

Thanks to Iamfanboy again. I didn't know you can shoot Vladimir and skip the dialogue. Its not a very big time saver, but its nice to know nonetheless.
Even though its not much better than the leather jacket, I picked up the mesh jacket, because I didn't plan on getting another armor upgrade.
The rest of the segment is self-explanatory. You have to stab Vladi twice in order to get the Jesters real name and a third time to kill him(which is highly recommended of course). On your way back to the hotel you shouldn't forget to order the ice at Wastelands.

This segment took the most retries and is still badly executed, mainly because of the high number of doorbumps (You may have noticed that it is ridiculously difficult to get through the game smoothly), the part where I failed to catch the toxic waste(which really bugs me, because I think its the only menu mistake in the whole run) and the part where I failed to talk to the Jester spirit, because of the textbox that always pops up in the middle of the screen. The mistakes don't add up to more than a few seconds, but it doesn't look very professional.

Segment 19 It is important to know that you can use the cyberdeck in battles, but only when there aren't any enemies on the screen.
It doesn't work 100% of the time, but it's consistent enough to make use of it in a speedrun.
I think they have to be out of the screen for one or two seconds, but I'm not really sure(I just tried and it worked).
The battles I couldn't avoid were decent, so were the matrix parts. Good one.

Drake's Volcano is arguably the most difficult chapter in the game and with 50HP/90MP it's almost impossible to complete it one go. The volcano is big, the enemies deal much damage and stun lock you very often and with only 50HP almost every IC hit is an instant death if you are not at full health, which is the reason I didn't choose the fastest paths in the matrix. With that said its funny that I wasted a spell after the 25k computer (I thought Heal was equipped when I cast Invisibility) and still completed the segment, because all of my previous attempts failed, even with perfect use of magic. The rest went well, especially the flame dodge in Drake's room, which is both necessary and nice to watch.

Those of you who paid attention may have noticed that I could have spent the remaining four Karma points on Invisibility, but it totally slipped my mind until the first few failed attempts of this last segment. A longer lasting Invisibility spell would have saved a few seconds, but it's not necessary to start all over again, because with the newly acquired Enfield super weapon we don't have any magic problems. The Aneki building is similar to Drake's Tower. We try to rush to the top, destroy this damn AI-computer and salvage the world (which isn't really salvageable, but who cares).

That's it hope you enjoyed the run.