Released in July 1993, this game is a pretty big step up from Revenge of Shinobi graphically and gameplay wise. Joe Musashi has some new moves in his arsenal, such as running and wall jumping, which he can use to stop Zeed for good. 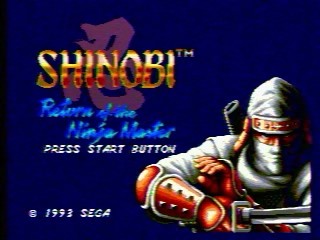 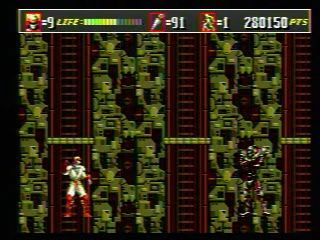 After I saw Molotov's run, I knew I had to make a run of this game myself. I tried to make this run no damage, but after getting hit once in the final level I just thought, "fuck it" and soldiered on. When I do an improvement to this run I will aim for no damage.

The reason for attempting a no damage run is:

1. Taking damage never saves time (except maybe in the last level with the electricity).

There are a few sections where I collide with enemies and it looks like I get hit, but you don't take damage from enemies themselves, you take damage from their attacks, so nothing is hurt other than a little time and my pride.

For those who don't know the game very well, playing on expert difficulty (the highest difficulty) makes no difference in the game's difficulty. The difficulty level only affects how many lives you have and how big your life bar is.

Concerning my ninjitsu use, I use Mijin rather than Kariu because Mijin does the exact same amount of damage, but takes a second less to cast than Kariu. I use Ikazuchi (the shield that can take 4 hits) on the 6th boss, in the electricity-infested area in the final stage, and on the last boss because it makes those sections faster. I was considering not using any ninjitsu throughout the entire run, but the first form of the 6th stage boss is too difficult and random to dodge. If anyone can give me reliable advice for that boss, I will try a no ninjitsu run.

1-1: In my successful run I must have one of my worst runthroughs of the very first level, I barely miss two ninjas with my shuriken bursts, forcing me to slow down and crouch. In addition I collide with a ninja when I try to attack him (remember no damage). About the samurai, I know you can swing your sword at them at point blank range, but I am very bad at it, plus I don't think I sacrifice much time throwing shurikens at them instead.

1-2: This was a really good run of the area, other than slowing down a bit around the spikes, I'm satisfied with my run of this area.

Round 1 boss: Ninjitsu used: None

Why?: Using a ninjitsu here does not seem to save time.

I pause a slight bit before running towards the boss so I can bait him into swinging his sword, making him open for the damage dealing. I stay far away from the boss when he slides across the screen because I want him far enough towards the center of the screen when he reappears so I can hit him. If the boss is on the edge of the screen your attacks just whiff.

2-1: A pretty boring forced-scroll stage, I try to move around a bit to make this stage more exciting.

Miniboss: Nothing exceptional to say here, I don't kill him as fast as possible because I err on my timing a bit.

2-2: Nice, smooth runthrough of this area.

2-3: Another forced-scroll area, this time moving upwards, I fall down in one segment as an attempt to make a little suspense, but there really isn't much to say here.

Why?: Look at how fast it dies.

White screen bug! Just an entertaining, random little bug that has no effect on gameplay whatsoever.

3-1: I know this area is slow going through, but if I try to jump over the brains in the glass, the brains will just jump with me, hurting me. I do a good job of running through this area, but I can understand if it looks a little dull.

Miniboss: Getting swarmed by brains is a nuisance more than anything else.

3-2: Not a huge fan of this area, very tough to maintain running here due to all the little bumps here and there. I do a decent job getting through here, but I get caught trying to jump kick over one of the bugs.

Why?: One casting of Mijin is the equivalent of 3 POW'ed shurikens on this boss.

This boss is really easy, he just has a long invincibility period after he gets hit.

4-1: Watch my craptacular timing as I fling shurikens with reckless abandon through this stage, if you don't like it too bad, my bad accuracy has no effect on time whatsoever here. In addition I hit most of the hoverbikes before they lay mines, making me safer.

Miniboss: Dies before it can even attack me.

4-2: The second time I collide with an enemy happens here, and I make some really odd movements the beginning of the stage, mostly due to some messed up timing, but nothing bad happens. I take the lower path in the beginning because I don't think the higher path is any faster.

Round 4 boss: Ninjitsu used: None

Why?: The boss has no invincibility period in between hits, so spamming shurikens is faster than Mijin. In addition the boss's attacks are not hard to dodge, meaning Ikazuchi would just be a time waster here.

The first form just dies really fast. I don't instantly destroy the gun on the second form because the missles are really tough for me to dodge if I destroy the gun as fast possible. I know it sounds weird, but try it out yourself. Other than the gun, I destroy everything very quickly.

5-1: I make a couple of minor mistakes, but I generally destroy everything at a good pace.

Miniboss: I kill him a little slowly, if I had better timing I would have killed him right after his first shot.

5-2: I know my method for diffusing dynamite is not the absolute fastest, but jump kicking the dynamite is risky, so I choose safety over speed.

5-3: No problems here, I slow down a bit dodging a shot, that is about the only thing to note here.

5-4: I block a shot for safety purposes when I probably should have just flip-jumped and shuriken bursted. I don't flip jump off of the moving platform the first chance I get for aiming purposes, and out of bad habit I collected some unnecessary shurikens.

5-5: I might not climb up in the fastest possible manner, but I get to the top fast enough.

Round 5 boss: Ninjitsu used: None

Why?: Mijin does zero damage to this boss, and Ikazuchi might make the boss a tiny bit faster, but I like my no-ninjitsu bonus (worst reason ever, isn't it). I force the boss into an AI trap, and I just kill him from there. Maybe not the fastest method of killing the boss, but it means I don't risk getting hit by falling debris or fire breath.

6-1: Another forced scrolling segment that isn't hard, but unlike the other segments if you make a really stupid mistake you die. Fortunately, I don't make any mistakes and I come out of this area alive and unscathed.

Miniboss: I mess up a shot initially, making a really close call, but other than that the the fight went smoothly.

6-2: I know there are a lot of screens here, but I'm just lumping them all together because they are all part of one big maze. I collect a ninjitsu power-up in case I run out of Ikazuchi on the boss. About the ninjas that jump kick me, it is very random when they decide to jump kick me. In addition, the jump kicks do no damage, it seems like they should, but thankfully they don't. I take it slowly on the large thrusting spikes because if I get caught by one, I die (just a teeny bit slower than what I do :P).

Why?: Helps me preserve POW while giving me more time to attack her rather than dodging her attacks.

About the first form of this boss, finding out which one is real is a matter of luck, there is no way you can tell which one is real by looking. The first form can theoretically be destroyed in 2 repetitions, but that requires perfect luck. During the 2nd form I probably could have been more aggressive and killed her faster, but I kill her fast enough.

7-1: I know my runthrough of this area is slow, (I don't jump through most of the cannons) but I am so afraid of dying here, I play it safe.

7-2: Not much to say, it is the final forced-scroll segment in the game.

7-3: No major mistakes here, I slow down a bit for the annoying little drones, but that is to make sure they don't hit me.

7-4: I really really really really hate this area. I won't say it is the hardest stage to exist in any game, but it is very unforgiving, and if you make a single mistake here you are almost guaranteed to get hit. This is the area where I take damage (gasp!). Basically, I tried to double jump, but I failed, landing on the moving platform. Then I jumped again, and this time instead of double jumping I perform a wall jump (damn you double use of the jump button!) sending me straight into electricity. Afterwards, I use Ikazuchi so I don't have to rely the moving platform for movement across the electricity (which is actually something I took from Neofix's time attack). Other than the tragic, catastrophic damage I took, my run through here was really good.

7-5: Just a big wall jumping segment, I grab the ceiling by accident in the end, causing me some confusion, but I do manage to grab the POW without losing any time.

Why?: Allows me to hit the boss without worrying about taking damage, making the battle much faster.

For a final boss this guy is really lame, the 6th stage boss is a lot harder than this guy. In his first form I walk left a bit and pummel him with shurikens without getting hit (no 'ting' sound from the Ikazuchi). In his second form I pummel him with 4 shurikens in a row, then wait a moment to prevent him from blocking my next 4 shurikens. Rinse, Wash, Repeat, and the final boss dies in no time.