The Ship: Murder Party is a 2006 PC shooter in which each passenger on a cruis ship is secretly assigned a target they have to take down without witnesses while also defending themselves from murder attempts. Despite being mostly a multiplayer concept, there's somehow also a singleplayer campaign. 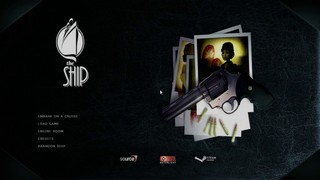 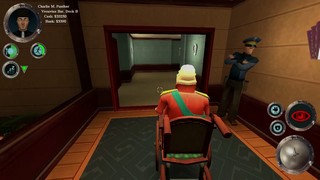 Welcome to The Ship Single Player.

I'd like to thank the people on SDA and plrusek who helped me with routing this game.

So let's get on the run itself.

First thing you'll notice I am showing the difficulty and after that the level selection screen. The reason for this is simple: chapter 1 is just an intro movie you can skip by going directly to chapter 2.
After that the only loading screen shows up. I gain control over my character after the message disappears this is where I start my timer. I leave the room, turn left and go into the locker room. Here the first RNG kicks in.
For serious attempts I need a purse bomb, a random melee weapon and a winchester rifle. The winchester can be replaced by a revolver. The other ranged weapons are not reliable enough. I use the bomb to kill my target and position myself so I can skip most of the dialogue.
There's only a few cutscenes I am not able to skip. After the skip I'm heading towards the sick bay to steal a sleeping potion and a poison syringe. This is another instance for RNG as the NPC I have to inject with the sleeping potion has different patterns he can walk along.
Luckily I get a good one and inject him quickly. After that I have to wait till the trigger kicks in which takes longer on higher difficulties.
Next mission is in the bar on deck b. I use the elevator to get up quickly and trigger the button for deck d while the elevator stops on deck c. This allows for a minor timesave later in the run. At the bar I simply talk to Bruno and collect all the money for him. With the winchester this mission is fairly simple.
Following after Bruno is the Fence for whom I have to steal 3 valuable items hidden on The Ship. These items are only triggered on this mission so I can't collect them earlier. First item is a golden helmet in the storage room next to the elevators. I use a short cut by jumping down from deck b. I can't jump straight down to deck d because the fall would kill my character instantly.
In the storage room is a goon set to kill me on sight. I dispose of him with the winchester, grabbing the helmet and using the second elevator to go back up into the restaurant. Now I have to get a guard uniform but first the major glitch I use for this run comes into effect. I head outside towards a small pool and take a step inside.
I need to get into the water and jump out of it to trigger the "infinite stamina" glitch. Otherwise I'd have to sleep at some point in the run which wastes time compared to this trick. After the glitch I head towards the locker room, steal a uniform and go upstairs to the captain's cabin where the next item is stored.
I wait with changing into the guard uniform until I can see the guard infront of the cabin because he can potentially block my way on the stairs. I grab the painting from the room and head back to the Fence while closing the door on another guard as a safety measure.
The last part of the mission is getting something from the bank vault. I jump down and get into the bank. There I kill the bank manager and gain access to the Holy Grail which I deliver to the Fence.

Now we get to a more crucial part of the run. The ambassador mission is the first runkiller as I have to protect this NPC while pushing him forward all the time. With the infinite stamina glitch this mission would be a lot slower as I regenerate my sprint meter a bit faster than normal.
After talking to the ambassador, I grab the suit and gun from his wardrobe as those are required to start the escort mission. The first goon is right at the elevator and I kill him with the revolver. Second goon spawns after the ambassador leaves the room again. He's killed with a quick bullet from the winchester.
Now I head towards the first elevator and if I had not triggered the button for deck d on my first ride I'd have to wait here but now the elevator is already there and the mission can continue a bit faster.
The third goon in the hallway is a very risky point for this mission as the guards can roam into the hallway and block my weapon usage. Luckily no guard is in sight and I kill the enemy. The last goon is spawning after the elevator ride on the way back to the ambassador's cabin. He's no problem but if I don't close the bank door sometimes a glitch with the camera inside can occur and destroy the run.

After finishing up the ambassador mission I hide my items except for the melee weapon in a trash can outside the holding cells. This is a core action for the later part of the run. I let myself be captured as I need to kill an NPC inside the holding cells. Now comes the first cutscene I cannot skip.
I kill the NPC, use the remaining time to please my other needs and collect my items again.

Now I get to poison the captain, which is why in the beginning I had to collect one syringe, I head towards the sauna but stop to destroy the bar window with my empty winchester. After talking to the NPC I head upstairs, poison the captain and use the window as a shortcut to finish this part of the mission.
My friendly helper then informs me that the captain is still alive, so I head to the sick bay to correct my mistake by using a single revolver bullet. Luckily neither the guard nor the goon spot me so I get to leave unnoticed.

Next up we have quite a few cutscenes I can't skip. I talk to the old lady and use the elevator to get to deck c quickly. While on the elevator I change into the guard uniform to prepare the last mission. In the pool area I grab two guns from the storage container and dispose of the kidnappers quickly.

I finish up talking with the lady and my helper to head upstairs for the radar room. This is another instance where RNG can really screw me over. A guard could roam into the area and block weapon usage. Or, after destroying the radar, my helper could despawn. Both run killers didn't happen and I finish with a 19:08. I let the final cutscene play out and stop recording.

Thanks for reading, watching and verifying my run.